Gastro Esophageal Reflux Disease (GERD) is defined as the failure of the anti reflux barrier, allowing abnormal reflux of gastric contents into the esophagus. It is a mechanical disorder which is caused by a defective lower esophageal sphincter, a gastric emptying disorder or failed esophageal peristalsis. Gastro-esophageal reflux is one of the most common digestive symptoms. Exposure of the oesophageal mucosa to acid, enzymes and other digestive secretions, leads to acute and chronic inflammation, with pain, and ulceration or stricture formation if untreated. Medical therapy is the first line of management. Esophagitis will heal in approximately 90% of cases with intensive medical therapy. However, symptoms recur in more than 80% of cases within one year of drug withdrawal. Since it is a chronic condition, medical therapy involving acid suppression and/or pro-motility agents may be required for the rest of a patient's life. Despite the fact that current medical management is very effective for the majority a small number of patients do not get complete relief of symptoms. Currently, there is increasing interest in the surgical management of gastro-oesophageal reflux disease (GORD).

In U.S. and Europe 44% of population describe their problem as GERD.

Symptoms characteristic to GERD is only present in 10 to 15%.

Indications for Surgical management of GRED:

Currently there are two methods of Fundoplication

Laparoscopic Fundoplication is a safe procedure, and can provide less postoperative morbidity in experienced hands. This is a surgical procedure done for Gastro oesophageal Reflux Disease (GERD). Fundus of the stomach which is on the left of the oesophagus and main portion of the stomach is wrapped around the back of the oesophagus until it is once again in front of this structure. The portion of the fundus that is now on the right side of the oesophagus is sutured to the portion on the left side to keep the wrap in place. The Fundoplication resembles a buttoned shirt collar. The collar is the fundus wrap and the neck represents the oesophagus imbricated into the wrap. This has the effect of creating a one way valve in the esophagus to allow food to pass into the stomach, but prevent stomach acid from flowing into the esophagus and thus prevent GERD.

Laparoscopic fundoplication is a useful method for reducing hospital stay, complications and return to normal activity.  With better training in minimal access surgery now available, the time has arrived for it to take its place in the surgeon's repertoire.

The 360 degrees Nissen fundoplication (NF) has been the standard operation for Gastro Esophageal Reflux, but is associated with substantial rates of, "gas bloat," gagging and dysphasia

Toupet fundoplication (TF), a 270 degrees posterior wrap, has fewer complications, and its outcome in compared with Nissen Fundoplication is favourable both in children as well as adults 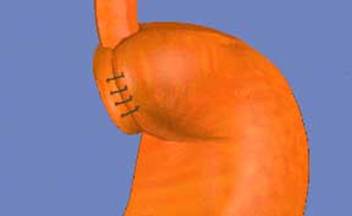 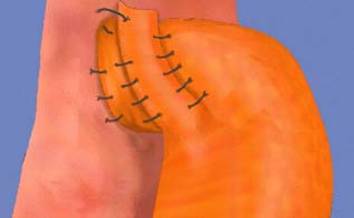 The 360 degrees Nissen fundoplication (NF) has been the standard operation for Gastro Esophageal Reflux (GER), but is associated with substantial rates of recurrence, "gas bloat," gagging, and dysphagia. most surgeon believe that the Toupet fundoplication (TF), a 270 degrees posterior wrap originally described in conjunction with myotomy for achalasia, has fewer complications, and its long-term outcome in compared with Nissen Fundoplication is favorable both in children as well as adults. This article describes a technique of laparoscopic posterior Toupet fundoplication. 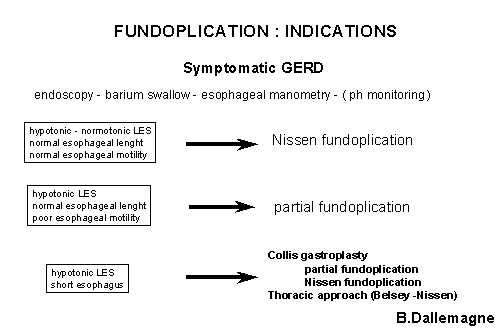 The main tasks of this operation consist of:

Many patients have symptoms palliated by lifestyle measure like diet and exercise, others by simple medication, and some by strong medication like, proton pump inhibitors. A certain proportion of patient has refractory or long-term symptoms, and operation can be considered in this group of patients. As reflux symptoms are frequent and variable, it is wise to obtain both ambulatory 24 pH-metry and oesophageal motility studies prior to surgery. Upper G.I. Endoscopies should be performed in all patients. 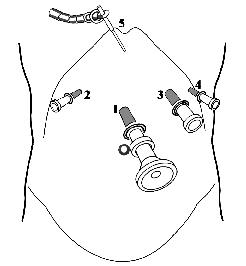 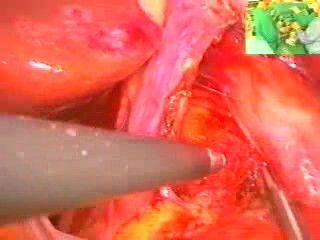 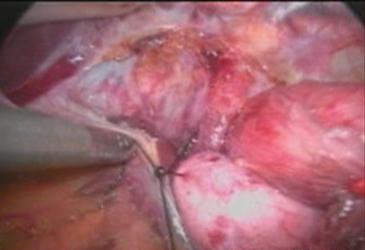 Fixation of wrap by Intracorporeal sutures:

Ending of the operation.

Patient may be discharged 2 days after operation if every thing goes well. The patient may have slight dysphagia initially but usually resolves after 6 weeks. The patient having any complain of dysphagia should be examined endoscopically after 3 to 4 week of operation.

Laparoscopic fundoplication is a useful method for reducing hospital stay, complications and return to normal activity if carried on in proper manner. With better training in minimal access surgery and better ergonomics now available the time has arrived for it to take its place in the surgeon's repertoire.

Physician, register in our medical database for patient referral.