READ ABOUT LAPAROSCOPIC EQUIPMENT AND INSTRUMENTS

Many surgeons says "Laparoscopy is the by product of medical engineering". Laparoscopy was initially criticized due to the cost of instruments and possible complications due to these sharp long instruments and difficult hand eye co-ordination. Many senior surgeon started saying "Laparoscopy is conspiracy against common man".  Minimal access surgery has developed rapidly only after grand success of laparoscopic cholecystectomy. Recently computerized designing of laparoscopic instrument is introduced and microprocessor controlled safety features are added. Now it is impossible to stop the speed of growth of minimal access surgery and every day new procedures are added on its list. Laparoscopy is a technologically dependent surgery and before starting surgery every surgeon should have reasonably good knowledge of these instruments. 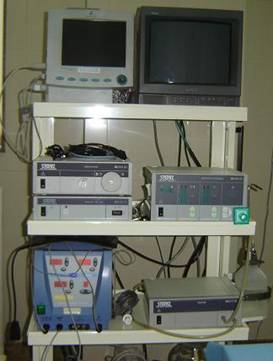 The mobile video cart is equipped with locking brakes and has 4 anti-static rollers. The trolley has a drawer and three shelves, the upper shelves have a tilt adjustment and used for supporting the video monitor unit. Included on the trolley is an electrical supply terminal strip, mounted on the rear of the 2nd shelf (from the top). Recently ceiling mounted trolleys are launched by many companies which is ergonomically better and consume less space in operation theatre. 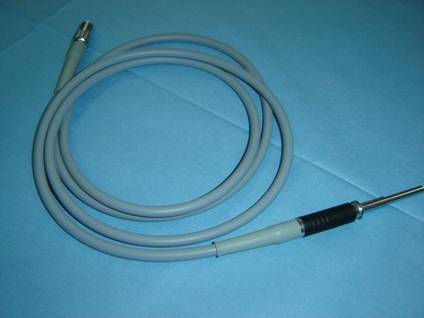 Light is essential for performing most of the modus operandi of life. Thanks to Edison who discovered electric bulb. The Minimal access surgery depends on the artificial light available in closed body cavity, and before the discovery of light source and light cable; mirrors were used to reflect the light onto the subject where the direct light access was not possible.

In 1867 Bruck, a Dentist from Breslau, made a platinum wire loop which he heated with electric current, and used that as a light source for purpose of surgery. Endoscopy was performed, by using tungsten light bulbs inside the body cavity before 1954. These bulbs were emitting low frequency red color of light. The bulb was so hot that there was always a risk of injury to bowel. 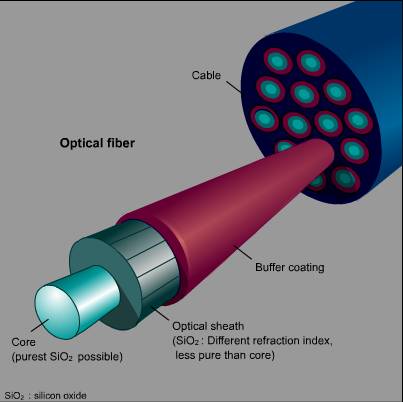 Nowadays there are two types of light cable available in market.

These cables are made up of a bundle of optical fibres glass thread swaged at both ends. The fibre size used is usually between 10 to 25 mm in diameter. They have a very high quality of optical transmission, but are fragile. In fact, progressively as they are used, some optical fibres break. The loss of optical fibres may be seen when one end of the cable is viewed in daylight. The broken fibres are seen as black spots.

These cables are made up of a sheath that is filled with a clear optical gel (Liquid crystal). Theoretically they are capable of transmitting 30% more light than optic fibres. Due to more light and better color temperature transmission this cable is recommended in those circumstances where documentation (movie, photography or TV) is performed. They pose three problems:

The quartz swaging at the ends is extremely fragile, especially when the cable is hot. The slightest shock, on a bench for example, can cause the quartz end to crack and thus cause a loss in the transmission of the light;

· These cables are made more rigid by a metal sheath, which makes them more difficult to maintain and to store.

In conclusion, even though the choice is a difficult one, we use optical fibre cables, which are as fragile as the gel cables but their flexibility makes them much easier to maintain.

Conventional attachment has at right angle connection for light source and camera. Recently some new attachment for light cable is available known as DIC Interface. The benefit of this is that it maintains upright orientation regardless of angle of viewing, using auto Rotation system. It also provides single handed control of the entire endoscope camera system.

One of the advantages of the laparoscopy is that of obtaining a virtually micro-surgical view compared to that obtained by laparotomy. Quality of the image obtained very much depends on the quantity of light available at each step of optical and electronic system. 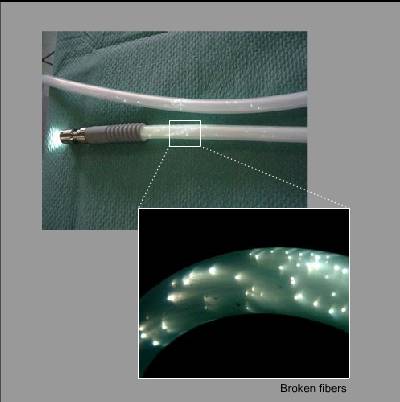 A typical light source is consist of

Lamp or bulb is the most important part of the light source. The Quality of light depends on the lamp used. Several Modern types of light sources are currently available on the market. These light sources mainly differ on the type of bulb used. Four types of lamp are used more recently.

Halogen bulbs provide a highly efficient, almost crisp white light source with excellent color rendering. Electrodes in halogen lamps are made of tungsten; this is the only metal with a sufficiently high melting temperature and sufficient vapor pressure at elevated temperatures. They use a halogen gas that allows bulbs to burn more intensely without sacrificing life. Halogen bulbs are low voltage and have an average life of 2,000 hours. Color temperature of Halogen lamp is (5000-5600 K). These lamps are cheap and can be used for laparoscopic surgery if low budget setup is required.

Xenon lamps consist of a spherical or ellipsoidal envelope made of quartz glass, which can withstand high thermal loads and high internal pressure. For ultimate image quality, only the highest-grade clear fused silica quartz is used. It is typically doped, although not visible to the human eye, to absorb harmful UV radiation generated during operation. The colour temperature of Xenon lamp is 6000-6400 K. The operating pressures are tens of atmospheres at times, with surface temperatures exceeding 600 degrees C.

The anode, the larger electrode, receives electrons emitted by the cathode. Once the electrons penetrate the anode face, the resulting energy is converted to heat, most of which radiates away. The large, cylindrical shape of the anode helps to keep the temperature low by radiating the heat from the anode surface.

In metal halide lamp the mix of compounds (comprising mostly salts of rare earths and halides as well as the Mercury which provides the conduction path) is carefully chosen to produce an output which approximates to 'white' light as perceived by the human eye. There are two type of Metal halide lamp generally used:

Iron Iodide is a broad emitter and enhances the spectral output of the lamp in the 380nm region.

Gallium Iodide has the effect of introducing spectral lines at 403 nm and 417 nm of the electromagnetic spectrum.

The intensity of the light delivered by any lamp is also depends on the power supply of the source. However, increasing the power poses a real problem as concerns the heat created. At present, the improvements made to the cameras means that it is possible to return to reasonable power levels, of the order of 250 Watts. 400 W units are, however, preferable in order to guarantee sufficient illumination of the abdomen even when bleeding causes strong light absorption.

The most frequently used two main types of lamps are halogen and xenon. This difference may be remarked in the colors obtained, the xenon having a slightly bluish tint. The light emitted by xenon lamp is more natural compared to halogen lamp. However, most of the cameras at present analyze and compensate these variations by means of automatic equalization of whites (2100 K to 10000 K), which allows the same image to be obtained with both light sources.

A proper white balancing before start of the operation is a very good practice for obtaining a natural color. The white light is composed of the equal proportion of Red, Blue and Green Color and at the time of white balancing the camera sets its digital coding for these primary colors to equal proportion assuming that the target is white. And if at the time of white balancing the telescope is not seeing a perfectly white object then the setup of the camera will be very bad and the color perception will be very poor.

The newer light source of Xenon, now a day used is defined as a cool light but practically it is not completely heat free and it should be cared for ignition hazard.

For 100 % of energy consumed, a normal light source (a light bulb) uses approximately 2 % in light and 98 % in heat. This heat is mainly due to the infrared spectrum of light and due to obstruction in the pathway of light. If Infrared will travel through the light cable than the cable will become intolerable hot. A heat filter is introduced to filter this infrared to travel in fibre optic cable. A cool light source lowers this ratio by creating more light, but does not reduce the heat produced to zero. This implies a significant dissipation of heat, which increases as the power rating increases. The sources are protected against transmitting too much heat at present. The heat is essentially dissipated in transport, along the cable, in the connection with the endoscope and along the endoscope.

Some accidents have been reported due to burning caused by the heat of the optics system. It is therefore important to test the equipment, particularly if assemblies of different brands are used.

The purpose of condensing lens is to converge the light emitted by lamp to the area of light cable input. In most of the light source it is used for increasing the light intensity per square cm of area.

The Interface of a standard light source

It is essential to know about all the switch and function of the light source. All essential details of the equipment and all the action required on the part can be found on the operating manual of the product.

Manual adjustment allows the light source to be adjusted to a power level defined by the surgeon. When video cameras are used, close-up viewing is hampered when there is too much light, whereas more distant views may be too dark. To counter this problem, the luminosity of most of the current light sources is adjustable.

These systems are extremely valuable, permitting work to be performed at different distances from the target in good viewing conditions. However, the cameras currently available are often equipped with a regulation system, which are capable of automatic gain control in poor light condition and the purchase of a light source with adjustment associated with a camera equipped with an adjustment system is a double purchase that is unnecessary.

A laparoscopic surgeon should be technically well acknowledged of the principle of the instrument they are using, and should not always depend upon their technical team should an emergency arrive. The purchase of a costly instrument is not only answer for achieving a good task, perceptive to handle them is equally important.

Test your knowledge with laparoscopic quiz

READ ABOUT LAPAROSCOPIC EQUIPMENT AND INSTRUMENTS

Few among hundred of Surgeons & Gynaecologists trained at our Hospital