The earliest recorded references to endoscopy date to ancient times with Hippocrates. In his description there is explanation of rectum examination with a speculum. Hippocrates also advised injecting a large quantity of air into the intestines through the anus in the case of intestinal obstruction. Hippocrates also advocated the insertion of suppository that was 10 digits long. These descriptions suggest that Hippocrates was well aware of ileus with intestinal obstruction and thought that there were several possible etiologies, including faecal impaction, intussusceptions, and sigmoid volvulus. Moreover, Hippocrates treated these life-threatening conditions with minimally invasive approaches.

1585, Aranzi was the first to use a light source for an endoscopic procedure, focusing sunlight through a flask of water and projecting the light into the nasal cavity

1706, The term "trocar," was coined in 1706, and is thought to be derived from trochartor troise-quarts, a three-faced instrument consisting of a perforator enclosed in a metal cannula.

1806, Philip Bozzini, built an instrument that could be introduced in the human body to visualize the internal organs. He called this instrument "LICHTLEITER". Bozzini used an aluminium tube to visualize the genitourinary tract. The tube, illuminated by a wax candle, had fitted mirrors to reflect images.

1853, Antoine Jean Desormeaux, a French surgeon first introduced the 'Lichtleiter" of Bozzini to a patient. For many surgeons he is considered as the "Father of Endoscopy".

1867, Desormeaux, used an open tube to examine the genitourinary tract, combining alcohol and turpentine with a flame in order to generate a brighter, more condensable beam of light.

1868, Kussmaul performed the first esophagogastroscopy on a professional sword swallower, initiating efforts at instrumentation of the gastrointestinal tract. Mikulicz and Schindler, however, are credited with the advancement of gastroscopy

1901, Dimitri Ott, a Petrograd gynecologist wore head mirrors to reflect light and augment visualization and used access technique in which a speculum was introduced through an incision in the prior fornix in a pregnant woman.

1901, The first experimental laparoscopy was performed in Berlin in 1901 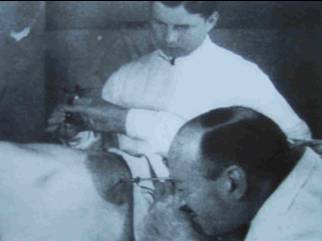 by German surgeon Georg Kelling, who used a cystoscope to peer into the abdomen of a dog after first insufflating it with air. Kelling also used filtered atmospheric air to create a pneumoperitoneum, with the goal of stopping intra-abdominal bleeding (Ectopic pregnancy, bleeding ulcers, and pancreatitis) but these studies did not find any response or supporters. Kelling proposed a high-pressure insufflation of the abdominal cavity, a technique he called the "Luft-tamponade" or "air-tamponade".

1910, H.C. Jacobaeus of Stockholm published a discussion of the inspection of the peritoneal, pleural and pericardial cavity.

1911, Bertram M. Bernheim, from Johns Hopkins Hospital introduced first laparoscopic surgery to the United States. He named the procedure of minimal access surgery as "organoscopy". The instrument used was a proctoscope of a half inch diameter and ordinary light for illumination was used.

1911, H.C. Jacobaeus, again coined the term "laparothorakoskopie" after using this procedure on the thorax and abdomen. He used to introduce the trocar inside the body cavity directly without employing a pneumoperitoneum.

1918, O. Goetze, developed an automatic pneumoperitoneum needle characterized for its safe introduction to the peritoneal cavity.

The next decade and a half saw an interruption of technological advances and a lack of any substantial development in endoscopy due to World War I.

1920, Zollikofer of Switzerland discovered the benefit of CO2 gas to use for insufflation, rather than filtered atmospheric air or nitrogen.

1929, Kalk, a German physician, introduced the forward oblique (135 degree) view lens systems. He advocated the use of a separate puncture site for pneumoperitoneum. Goetze of Germany first developed a needle for insufflations.

1929, Heinz Kalk, a German gastroenterologist developed a 135 degree lens system and a dual trocar approach. He used laparoscopy as a diagnostic method for liver and gallbladder disease.

1936, Boesch of Switzerland is credited for doing the first laparoscopic tubal sterilization

1938, Janos Veress of Hungary developed a specially designed spring-loaded needle. Interestingly, Veress did not promote the use of his Veress needle for laparoscopy purposes. He used veress needle for the induction of pneumothorax. Veress needle is the most important instrument today to create pneumo-peritoneum. Veress needle consists of an outer cannula with a beveled needle point for cutting through tissues. Inside the cannula of verses needle is an inner stylet, stylet is loaded with a spring that spring forward in response to the sudden decrease in pressure encountered upon crossing the abdominal wall and entering the peritoneal cavity.

1939, Richard W. Telinde, tried to perform an endoscopic procedure by a culdoscopic approach, in the lithotomy position. This method was rapidly abandoned because of the presence of small intestine.

1944, Raoul Palmer, of Paris performed gynaecological examinations using laparoscopy and placing the patients in the Trendelenberg position, so air could fill the pelvis. He also stressed the importance of continuous intra-abdominal pressure monitoring during a laparoscopic procedure.

1953, The rigid rod lens system was discovered by Professor Hopkins. The credit of videoscopic surgery goes to this surgeon who has revolutionized the concept by making this instrument.

1960, Kurt Semm, a German gynaecologist, who invented the automatic insufflator. His experience with this new device was published in 1966. Although not recognized in his own land, on the other side of the Atlantic, both American physicians and instrument makers valued the Semm's insufflator for its simple application, clinical value, and safety.

1966, Kurt Semm introduced an automatic insufflation device capable of monitoring intra-abdominal pressures. This reduced the dangers associated with insufflation of the abdomen and allowed safer laparoscopy.

1970, Gynaecologists had embraced laparoscopy and thoroughly incorporated the technique into their practice. General surgeons, despite their exposure to laparoscopy remained confined to traditional open surgery.

1977, First Laparoscopic assisted appendicectomy was performed by Dekok. Appendix was exteriorized and ligated outside.

1978, Hasson introduced an alternative method of trocar placement. He proposed a blunt mini-laparotomy which permits direct visualization of trocar entrance into the peritoneal cavity. A reusable device of similar design to a standard cannula but attached to an olive-shaped sleeve was developed by Hasson. This sleeve would slide up and down the shaft of the cannula and would form an airtight seal at the fascial opening. In addition, the sharp trocar was replaced by a blunt obturator. This cannula is held in place by the use of stay sutures passed through the fascial edges and attached to the body of the cannula.

1985, The first documented laparoscopic cholecystectomy was performed by Erich M�he in Germany in 1985. 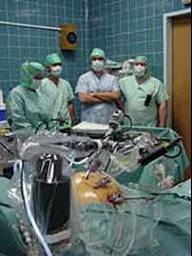 1994, A robotic arm was designed to hold the telescope with the goal of improving safety and reducing the need of skilled camera operator.

In the future remote handling technology will overcome the manipulative restriction in the current instruments. There is no doubt 20 years from now some surgeons will be operating exclusively via a computer interface controlling a master-slave manipulator.

If computer-controlled machinery can mimic the awareness, adaptability and knowledge of a human surgeon, such a takeover in the operating theatre is actually realistic.

In the operating room of the future, physicians will use tiny high-tech tools to travel inside the body with dexterity and precision beyond imagining. The future is now, But the future of any new technology depends upon how well the training is.

Although the potential of robotic surgery is just beginning but, progress may come quickly. Laparoscopic gallbladder surgery was first done 1987, but it became standard within five years. Just think about a surgeon ! He picks up this black box and waves it over your body, and you're fixed. How's that going to happen? One day a surgeon may use robotic devices to enter the body through its own orifices. They could carry medical instruments inside the body, where they would be manipulated by simple computer commands.