One of the major limitations of minimal access surgery is the loss of depth perception. The surgeon works with an artificial two dimensional video pictures available on the monitor. There is a need to develop some mechanism to improve depth perception or stereoscopic vision. This article describes the principles of laparoscopic imaging system presently available for surgeons, with historical background and recent advancement in endoscopic visual technology.

Stereopsis is from the Greek word for "solid sight", and thus refers to perception of three-dimensional shape from any source of depth information. Unlike horses, humans have two eyes located side-by-side in the front of their heads. Thanks to the close side-by-side positioning, each eye takes a view of the same area from a slightly different angle. The two eyes have different views of the visual world and these different views setup disparities that give us information about relative depth of the image that is third dimension of vision. Binocular disparity results when image of an object falls on different areas of the two retinas and binocular vision or stereopsis is impression of depth resulting from differences in the images on these two retinas. We lost stereoscopic vision in laparoscopy because both the eye see same two dimensional picture available on the monitor.

In 1838 Charles Wheatstone published the first paper on stereopsis entitled "On some remarkable and hitherto unobserved, phenomena of binocular vision". In this Wheatstone pointed out that the positional differences in the two eyes' images due to their horizontal separation yielded depth information. Prior to this time the principal problem in the study of binocular vision was: how is the world seen as single when we have two different views of it? People thought that only objects with the same visual directions, falling on corresponding points would be seen as single, all other points would be double. By means of the stereoscope that he invented Wheatstone demonstrated that not only does the stimulation of non-corresponding points yield singleness of vision, it also results in the perception of depth.

Picture showing difference in angle of light on different retinas

Cells in visual cortex are sensitive for binocular vision some cells are sensitive for corresponding areas of the left and right retinas and some have sensation for non corresponding areas of the two retinas and the difference in image on the two retinas of eye is perceived by cortex as a depth. Binocular disparity provides the visual system with information concerning the three-dimensional layout of the environment. Recent physiological studies in the primary visual cortex provide a successful account of the mechanisms by which single neurons are able to signal disparity.

Recent studies of visual perception have begun to reveal the connection between neuronal activity in the brain and conscious visual experience. Transcranial magnetic stimulation of the human occipital lobe disrupts the normal perception of objects in ways suggesting that important aspects of visual perception are based on activity in early visual cortical areas. Recordings made with microelectrodes in animals suggest that the perception of the lightness and depth of visual surfaces develops through computations performed across multiple brain areas.

Even though the picture on the monitor is two dimensional the operator can assume some depth due to different cues for monocular vision. This is known as "depth cue".

Different depth cues. The depth cue which are crossed, we lost in minimal access surgery.

Among all the depth cue mentioned above in chart only few monocular are available on the monitor screen. Oculomotor binocular depth cue like convergence, accommodation and stereopsis is lost on the today's 2D monitor screen.

Minimal access surgery depends on the working through artificial light in closed cavity. In the past, endoscopic procedures were done without the aid of monitors. The operator visualised the interiors of the patient directly through the eye- piece of the scope.

In 1826 Segalas of France designed and built a urethroscope. He used an introductory cannula and mirrors for light.

In 1867 Bruck, a Dentist from Breslau, made a platinum wire loop which he heated with electric current, and used that as a light source for purpose of surgery.

Since the 1950's there has been an enormous growth of technology in Minimal access surgery.

Kalk of Germany has been dubbed 'the father of laparoscopy'. He wrote papers on the subject from 1929 to 1959 and he devised a foroblique viewing system for use on his work with liver and gallbladder disease. It is his methods that have widely been adopted and are in use today.

Hopkins (1950) discovered rod lens system for laparoscopy. With the help of fibre optic cable it became possible to visualise the intra abdominal structure.

In 1959 a laparoscopic procedure was demonstrated using a closed circuit television program using the "Fourestier method ". This method was developed by transmitting an intense beam of light along a quartz rod from the proximal to distal ends of the laparoscope

In 1960 the first endoscopic camera was developed in a surgical department in Melbourne, Australia. During the 1970s box-sized colour cameras were developed which lead to great improvement to video display.

By 1984, palm-size solid- state cameras were available for use in endoscopic surgery. The introduction of the charged- coupled- device (CCD) image sensors was the pivotal moment in the modern era of endoscopic video systems. The use of a CCD chip camera attached to a choledescope during choledochotomy was first reported in 1985.

The first report of the routine use of television laparoscopy was published in 1986.

This latest advancement in endocamera technology involves the mounting of two micro cameras on the tip of a laparoscope. Two separate image signals are captured and alternately transmitted to the monitor with a frequency of 100 Hz. Two different techniques exist for presenting the left eye with the image from the left camera and the right from the right.

The first method, "with glasses", requires the surgeon to wear active-liquid-crystal shutter-glasses that receive the signal from an infrared transmitter. The alternate optical shuttering of the glasses is controlled by the transmitted signals. As a result the view of left eye is obstructed when the right-image signal is displayed on the monitor and vice versa. A total of 60 pictures each are presented separately to each eye in this way during one second. The brain is then able to compose a 3-D image from this array of image signals.

The second technique, "without glasses", adopts the same principle but in this case the shutter is placed in front of the video monitor. This large liquid -crystal shutter changes polarization and synchronizes with the respective eye. The surgeon wears a passive eyewear, fitted with right circular polarized lens in the right eye and a left circular polarized lens in the left eye. The right eye and left eye then is each able to only view the respective similarly polarized image signal. In this way a 3-D image is composed in the brain.

The improved depth perception with 3-D systems does not always translate into improved performance of laparoscopic tasks. Some studies have demonstrated faster motor performance of specific Laparoscopic tasks when using the 3-D camera system compared to the 2-D camera system. On the other hand the loss of depth perception when using 2-D is well compensated by the monocular human eye in Laparoscopic surgery. This is accomplished using a wide array of available cues- moving parallax, relative position, accommodation, and familiar size. The need for the surgeon to use eyewear during surgery is bothersome and causes some surgeons to fell dizziness.  The present study has shown that endoscopic task performance improves with a shadow inducing arrangement.

A telescope with light delivering through a separate illumination cannula was developed by Schurr MO et al in 1996. 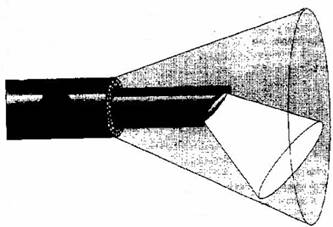 This shadow telescope is a rigid 10 mm - endoscope with 30 view direction and uses additional illumination fibres ending in an optimised distance behind the front lens. This arrangement of illumination fibres creates a more natural and more plastic appearance, a better balanced contrast and a well-dosed visible shadow. The shadow gives additional secondary space clues and therefore improves orientation and judgement of the three-dimensional properties.

In these shadow telescope angle between the first and second source of illumination is fixed and due to this shadow is also fixed. The second problem with this telescope is that the light which is creating shadow comes from below but we do not usually experience getting illuminated from the floor. All the light in our day to day life is coming from above and most of the time the shadow we are seeing lies below the object but in this telescope the shadow is above the object and so the shadow seems to be unnatural.

A new development is the use of virtual reality surgical simulators for training is now a days available at university of Europe. The unit is currently assessing the validity of a number of these systems, with a view to incorporating them on our training programs in the near future.

Virtual reality is one of the good research and development areas in the laparoscopic imaging technique  today. There are a number of ways in which virtual reality technology can be employed to create more intuitive ways for humans and computers to work together. In the past 5 years, many different laparoscopic procedures have been shown to be effective and now are an accepted part of surgical practice so we hope new technology will come soon in minimal access surgery.

Virtual reality future was also influenced by film techniques such as stereoscopic, or 3-D cinema. Cinerama, the best-known of these technologies, sought to expand the movie-going experience by filling a larger portion of the audience's visual field. Three cameras, shooting from slightly different angles, were used to film each scene in a Cinerama movie. The film was then synchronized and projected onto three large screens that curved inward, wrapping around the audience's peripheral visual field. This technology proved too costly to be embraced by most commercial theatres, but the theory of visual immersion would go on to become an important Virtual reality element.

It is also possible to experience virtual worlds without using immersion devices. New technology such as The PHANTOM, developed at the MIT Artificial Intelligence Lab, creates the illusion of touching virtual objects. Simulation Virtual reality, widely found in games arcades and parks, use a combination of video monitors and movable pods or platforms to create virtual experiences. The Magic Edge, for example, a combination restaurant/bar in Mountain View, California, offers virtual reality flight simulators that let would-be fighter pilots battle each other over a fully rendered virtual landscape. It is even possible to enter virtual worlds through a desktop computer, although the high cost of the equipment involved makes it difficult to create a truly immersive Virtual reality event. Progress in laparoscopy has been facilitated by rapid developments in technology, namely virtual reality microprocessors camera light source and instrumentation. We hope Continued advancements will simplify surgical techniques and expand the applications of laparoscopy with new visual techniques.