-- ALL -- General Surgery Gynecology Robotic Surgery Urology WLH
Open myomectomy is still better for multiple huge intramural fibroid
Treatment of fibroids can range from no treatment whatsoever to surgery. Unless fibroids are causing excessive bleeding, discomfort or bladder problems, treatment usually isn't necessary.
When patient have fibroids, she ought to be evaluated periodically to review symptoms, and to monitor the fibroid and uterus size with abdominal and pelvic examinations. Without having symptoms, routine pelvic ultrasounds haven't much benefit. Fibroids will probably grow every year until menopause, but this isn't an indication which lady will  will want treatment, unless the alteration is accompanied by disabling symptoms.
Abdominal Myomectomy is still consider as treatment of choice by many gynecologist and experts. With this operation, a cut is created over the skin on the lower abdomen (a "bikini cut"). The fibroids are taken from the wall from the uterus, and the uterine muscle is sewn together again using several layers of stitches. patient will be asleep for that procedure. The majority of females spend two nights in the hospital and four to 6 weeks recovering in the home. Laparoscopic Myomectomy - Within a laparascopic myomectomy, four one-centimeter incisions are available in the bottom abdomen: one with the navel, one beneath the bikini line close to the pubic hair, the other near each hip. The abdominal cavity is loaded with carbon dioxide gas. A skinny, lighted telescope is placed using an incision hence the doctors can see the ovaries, fallopian tubes and uterus. Long instruments, inserted over the other incisions, are employed to eliminate the fibroids. The uterine muscle might be sewn together again, the gas is released as well as the skin incisions are closed. Surgery in your fibroids may help with symptoms like heavy periods. There are several kinds of surgery for fibroids. A patient need to confer with her doctor about which can be right for her. One can have surgery to have just her fibroids removed. This operation is known as a myomectomy. This means you retain your womb in order to continue to have children if you would like. And not every one would work just for this operation. 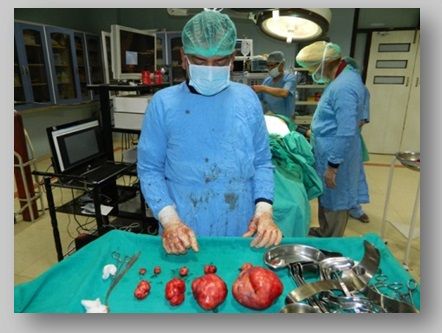 It depends the location where the fibroids are, what number of surgeon will find and the way large they're. Huge fibroid could have removed by keyhole surgery but outcome is not better, open surgery has better substantial decline in abdomen) or through  vagina. Patient will have less pain and may recover faster after keyhole surgery than after open surgery. But keyhole surgical procedures are only suitable if fibroids are small.
3 COMMENTS
Dr. Mohammed Ali
#1
Sir thanks for sharing your knowledgeable video of open myomectomy is still better for multiple huge intramural fibroids. This is very useful video for young doctors.
Rubina
#2
Sir, I watched your video and get more information. I have one query. What happens to the stitches? Do they stay or melt with time?
Sumitra
#3
Sir, I have fibroids for the last two years. I want to remove my fibroids. Please told me open surgery is better or laparoscopy surgery?
Top