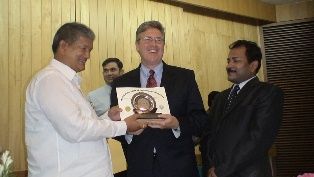 Honorable Mr. Harish Rawat Minister of Labour and Employment, Government of India as chief guest of certification ceremony of 120th batch of Training Course on July 2010.

Honourable Minister of Labour and Employment Govt. of India Mr. Harish Rawat was the chief guest and so on this Certification Day of the World Laparoscopy Hospital, the surgeon’s community seems to suggest that two fundamental changes need to occur so as we can move forward on this important concern. There is a need for a change in attitude towards higher surgical training among surgeons and Gynecologists, and there is need to finally include the institute like World Laparoscopy Hospital in the country's plans for economic and social development by encouraging the input of overseas students from all over World.

And not only is there increased awareness towards the training in minimal access surgery, but the Government is also willing to do something to help the non-Government medical schools.  Mr. Rawat pointed to the ongoing CME (Continued Medical Education Program), project and now the assistance for Technical and Vocational Education and Training for which Government sponsored institutions will benefit. Learn more...
2 COMMENTS
Dr. M. Chandran
#1
A great moment in my life. I am so lucky to receive the certificate to Mr Harish Rawat Minister of Labour and Employment, Government of India. Thanks.
Dr. Sunita singh
#2
I love this course. Dr. Mishra is very energetic and explains the surgery very well. His teaching style is very interesting and understandable. Thanks.
Top