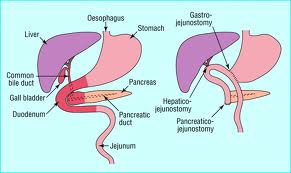 Today the Whipple surgery has become an incredibly safe surgery in the USA. At tertiary care centers where a large numbers of these procedures are performed by a selected few surgeons, the mortality rate from the surgery is under 4%. Studies have shown that permanently outcomes from the Whipple surgery, the expertise of the center and the surgeon is essential. At World Laparoscopy Hospital, Expert Laparoscopic Surgeons has performed a lot more than 100 consecutive Whipple type of procedures in the last 20 years with good outcomes.

What is a Whipple surgery?

Within the Whipple surgery the top from the pancreas, a portion from the bile duct, the gallbladder and the duodenum is removed. Occasionally some from the stomach can also be removed. After elimination of these structures the remaining pancreas, bile duct and also the intestine is sutured back to the intestine to direct the gastrointestinal secretions back into the gut. Laparoscopic Whipple surgery

When was a Whipple surgery required

A Whipple surgery is conducted for

What's the outcomes of the Whipple surgery?

Over the last 22 Years major pancreatic centers in the United States have developed excellent recent results for the Whipple surgery. In just about all the major centers the death rate out of this surgery is now less than 5%.

Recent reports from Johns Hopkins and Memorial Sloan Kettering have shown that outcome from surgery for a Whipple surgery would depend about the experience of a healthcare facility and also the surgeon performing the surgical surgery. In those that hospitals that perform high amount of these procedures the death rate from the Whipple surgery has become under 5%. In hospitals that infrequently perform the Whipple surgery a significantly higher complication rate and the death rate in the surgery often more than 15 to 20% continues to be reported in surgical literature. The American Cancer Society recommends the Whipple surgery should be performed in a center that's experienced and does high amount of these complex surgical treatments to guarantee the best outcome.

What's the connection with the Whipple surgery at World Laparoscopy Hospital?

At World Laparoscopy Hospital surgeons has performed greater than a hundred consecutive Whipple surgeries without any deaths in the surgical treatment.

Will the Whipple surgery improve my survival?

The entire survival after the whipple surgery for pancreatic adenocarcinoma is all about 20% at 5 years after surgery. Patients without spread of cancer into their lymph nodes might have up to a 40% survival. The actuarial survival is less than 5% at five years for patients patients with pancreatic adenocarcinoma who are treated with chemotherapy alone. The surgery is usually curative in patients with benign or low grade cancers of the pancreas.

Will I require any further treatment for my cancer following the Whipple surgery?

Will I become diabetic after a Whipple surgery?

Our experience has been that patients who're diabetic during the time of surgery or who've an abnormal blood sugar level that is controlled on the diet prior to surgery have a superior chance for the seriousness of the diabetes becoming worse following the surgery. However patients who have completely normal blood sugar levels prior to surgery with no good reputation for diabetes and don't have chronic pancreatitis have a low probability of developing diabetes following the Whipple surgery.

What can I eat after the surgery?

There is no restriction of the diet following the surgery. Some patients may not tolerate very sweet foods and may have to avoid this. Will my life be altered greatly after the Whipple surgery? Will I be able to do all the things that I can do now? There is acceptable alteration of lifestyle after the Whipple surgery. Most patients are able to return to their normal functional levels.

Researchers at John Hopkins University mailed surveys to Whipple surgery survivors who had been operated on at Hopkins between 1981 and 1997. The questionnaire was divided into sections that looked over physical abilities, psychological issues and social issues; one more section evaluated functional capabilities and disabilities. Scores were reported like a percentile, with 100 % being the highest possible score. Exactly the same questionnaire was then delivered to several healthy individuals and a group of patients who had laparoscopic gallbladder removal.

The Whipple surgery is a complex surgery with a high possibility of developing complications when the surgeon performing the surgical procedure has limited experience of this surgery. In the hands of surgeons who're experienced with this surgical surgery the complication minute rates are usually very low.

The issues and complications that may be seen following this surgery include:

Pancreatic fistula: After the tumor is taken away from the pancreas the cut end of the pancreas is sutured back to towards the intestine to ensure that pancreatic juices can go back to the intestine. The pancreas is an extremely soft organ as well as in some patients this suture line might not heal perfectly. Should this happen then patients develop leakage of pancreatic juice. Usually the surgeon leaves behind a drainage catheter within the abdomen during the surgery. Any leakage of pancreatic juice following the surgery is generally removed from the body by this drainage catheter. In just about all patients who develop leakage of pancreatic juice after the surgery, the leakage heals by itself. It's uncommon for patients to become re-operated with this complication. At World Laparoscopy Hospital this complication has occurred in about 4% of all the surgeries that people have performed. Gastroparesis: The very first five to six days following the surgery, you will be supplied with intravenous fluids until your bowel function returns. After your bowel function have return your surgeon will start yourself on a diet of clear liquids as well as your diet will progress to some regular diet while you tolerate it.

In up to 25% of patients, the stomach may remain paralyzed following the surgery and it might take up to Four to six weeks for the stomach to adjust to the alterations after the surgery to work normally. During this time period you may not a tolerate a diet very well. Should you fall within this category then you will be provided with nutrition through a small feeding tube that the surgeon has place into the intestine at the time of surgery. In just about all patients the stomach function returns to normalcy after this Four to six week period after the surgery

What are the long-term complications of the Whipple surgery?

Some of the long-term consequences from the Whipple surgery include the following:

Mal-absorption: The pancreas produces enzymes required for digestion of food. In certain patients removal of part of the pancreas throughout the Whipple surgery can lead to a diminished manufacture of these enzymes. Patients complain of bulky diarrhea type of stool that is very oily. Long-term treatment with oral pancreatic enzyme supplementation usually provides relief from this problem. Alteration in diet: After the Whipple surgery we generally recommend that the patients ingest smaller meals and snack between meals to permit better absorption of the food and to minimize symptoms of sense of being bloated or getting too full.

Loss of weight: It is common for patients to get rid of as much as 5 to 10% of their body weight compared to how much they weigh prior to their illness. The weight loss usually stabilizes quickly and most patients following a small amount of initial weight reduction are able to maintain their weight and prosper.

What questions should I ask my surgeon in regards to a Whipple surgery?

The Whipple surgery is an extremely complex surgery and staging from the patient and results of surgery is very dependant on the experience of the surgeon for the pancreatic cancer. A wide open and frank discussion with your physician might help you are making appropriate choices relating to your therapy. The following are some of the question that could