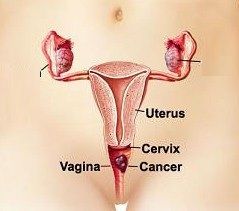 What are causes and risk factors for vaginal cancer?

Age and exposure to the drug DES (diethylstilbestrol) before birth affect a woman's risk of developing vaginal cancer. Anything that increases your risk of having a disease is called a risk factor. Risk factors for vaginal cancer range from the following:

What are symptoms and signs of vaginal cancer?

Possible signs of vaginal cancer include pain or abnormal vaginal bleeding. Vaginal cancer often does not cause early symptoms and may be found during a routine Pap test. When symptoms occur they might be caused by vaginal cancer or by other conditions. A doctor should be consulted if the following problems occur:

What tests are utilized to diagnose vaginal cancer?

Tests that examine the vagina and other organs within the pelvis are used to detect (find) and diagnose vaginal cancer. The next tests and procedures may be used:

What is the prognosis for vaginal cancer?

Treatment options rely on the next:

The following stages are used for vaginal cancer:

In stage 0, squamous cell cancer can be found in tissue lining the inside of the vagina. Stage 0 cancer is also called carcinoma in situ.

In stage I, cancer is located only within the vagina.

In stage II, cancer has spread from the vagina towards the tissue around the vagina.

In stage III, cancer has spread from the vagina towards the lymph nodes in the pelvis or groin, or to the pelvis, or both.

Stage IV is divided into stage IVA and stage IVB:

Recurrent vaginal cancer is cancer that has recurred (come back) once it has been treated. Cancer may come during the vagina or in other areas of the body.

What is the treatment for vaginal cancer?

Clinical trials are taking devote many parts of the country. Information about ongoing clinical trials is available from the NCI Web site. Choosing the most appropriate cancer treatment methods are a decision that ideally requires the patient, family, and healthcare team.

Surgery is easily the most common treatment of vaginal cancer. The next surgical procedures can be utilized:

Skin grafting may follow surgery, to correct or reconstruct the vagina. Skin grafting is a surgical procedure by which skin is moved from one part of the body to a different. A piece of healthy skin is obtained from part of your body that's usually hidden, like the buttock or thigh, and accustomed to repair or rebuild the region given surgery.

Whether or not the doctor removes all of the cancer that can be seen at the time of the surgery, some patients might be given radiation therapy after surgery to kill any cancer cells that are left. Treatment given following the surgery, to increase the likelihood of a cure, is called adjuvant therapy.

Topical chemotherapy for squamous cell vaginal cancer might be applied to the vagina in a cream or lotion.

New kinds of treatment are now being tested in clinical trials. These include the following:

This summary section refers to specific treatments under study in clinical trials, but it might not mention every new treatment being studied. Information about ongoing clinical trials can be obtained from the NCI Site.

Treatment of vaginal squamous cell carcinoma in situ may include the following:

Treating stage I squamous cell vaginal cancer may include the following:

Treating stage I vaginal adenocarcinoma can sometimes include the following:

Treatment of stage II vaginal cancer is identical for squamous cell cancer and adenocarcinoma. Treatment may include the next:

Treatment of stage III vaginal cancer is the same for squamous cell cancer and adenocarcinoma. Treatment may include both internal and external radiation therapy, with or without surgery.

Treating stage IVA vaginal cancer is identical for squamous cell cancer and adenocarcinoma. Treatment can sometimes include both internal and external radiotherapy, with or without surgery.

Treatment of stage IVB vaginal cancer is identical for squamous cell cancer and adenocarcinoma. Treatment can sometimes include the next:

This summary section refers to specific treatments under study in clinical trials, however it may not mention every new treatment being studied. Details about ongoing clinical trials can be obtained in the NCI Site.

Treating recurrent vaginal cancer may include the next:

Information about ongoing clinical trials can be obtained in the NCI Web site.