Disposable preloaded clip applicators are available in 5 mm and 10 mm in diameter.

These are expensive, but nice to use because the loading time of the clip can be minimized. Disposable clip applier comes with 20 preloaded clips. In case of emergency, when bleeding has to be stopped immediately one after another, the clip can be applied rapidly with the help of these clip applicators. Titanium is the most widely used metal in minimal access surgery for tissue approximation. It rarely reacts with the human body and this is why it is popular. It is easy to apply and can be left inside the abdominal cavity. After a few weeks, it is covered by fibrous tissue. Titanium clip is used by 99 percent of surgeons for clipping cystic duct and cystic artery at the time of laparoscopic cholecystectomy. Recently, silicon clips have been launched. Absorbable clips (Absolok, Ethicon) are preferred to clip cystic ducts nowadays. It adds to safety by working at the tip and it does not have a chance to form cystic duct clip stone. The absorbable soft clips can also be used in running stitches at the beginning and at the termination of knotting.

The medium-large size clip is 9 mm and used most frequently for the cystic duct and cystic artery. The medium size clip is 7 mm in length and can be used to clip a cystic artery or thin cystic duct. The large size clip is 11 mm in length and it is used to control thick wide cystic ducts or large mesenteric vessels. The jaw of the clip applicator should be at a right angle to the structure and before clipping surgeon should take care that both the jaw is seen. If one of the jaws is hidden there is always a possibility that some tissue will get entrapped between the jaw of the clip and clip will be loose. At the time of securing any duct or artery with a titanium clip, three clips are generally applied. Two clips are left towards the structure which is secured and one clip is towards the tissue which the surgeon wants to remove to prevent spillage of fluid. 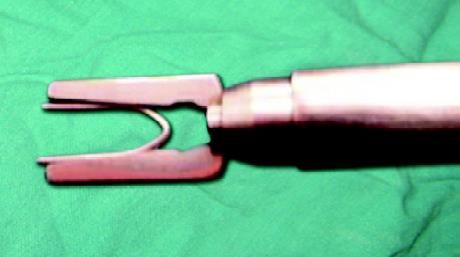 The distance between first and second clips should be 3 mm and the distance between the second and third clips should be 6 mm so that after cutting in between second and third clips there will be 3 mm stump both the side. The clip should not be applied very near to each other, because clips are held in position by dumbbell formation and if they are very near to each other, they will nullify the dumbbell formation of each other and both the clip will be loose. 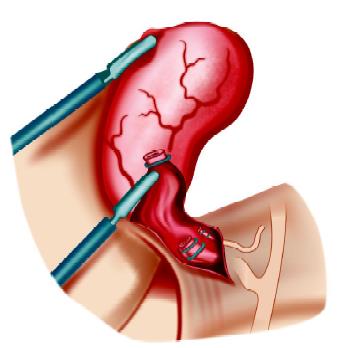 Although the reported case of CBD obstruction is very less, the surgeon should try to ligate the cystic duct to avoid this complication.