Dissection is defined as the separation of tissues with hemostasis. It consists of a sensory visual and tactile component, an access component involving tissue manipulation and instrument maneuverability. These are combined to achieve exposure, i.e. developing a suitable space for seeing and handling target structures.

Precision and meticulous hemostasis is an essential requirement in minimal access surgery. Endoscopic dissection, in contrast to dissection in conventional surgery, possesses several limitations. Three-dimensional direct visions are replaced by two-dimensional indirect visions in laparoscopic surgery. Illumination and the video image quality are still limited despite recent advances in video systems such as digitization and a three-chip end camera. Movement of the functional tip of laparoscopic instruments is restricted along with the kinematics response. The loss of tactile sensation in endoscopic surgery is yet another limiting factor.

Endoscopic dissection and manipulation of tissue within a confined space require a two-handed approach, assisting and dissecting both task is performed by the surgeon himself. A passive assisting instrument (usually a grasper) provides counter traction and exposure for the active dissecting instrument. The active instrument may be non-energized (e.g. scissors and scalpel) or energized with electricity (diathermy), ultrasound or light energy.

A variety of mechanisms have been used to divide tissue and enable hemostasis. They all involve some form of physical energy being applied to the appropriate tissue. The amount of energy required for dissection depends on the type and constituency of the tissue. The properties of tissues may vary in different directions and for different disease states. This in totality influences the choice of the modality for dissection.

The ideal dissection technique requires a modality that can accomplish meticulous hemostasis and will be tissue-selective without causing inadvertent tissue damage. It must be safe for both patient and surgical team when in regular use and when inactive in storage. In this respect built-in safety measures are mandatory. An ideal dissecting modality should be efficient in both power delivery and in space requirements. The modality must be cost-effective also. The initial expenditure needed to acquire and set- up the necessary equipment must be taken into account along with subsequent operational and maintenance costs.
In reality, there is no single “ideal” dissecting modality for entire minimal access surgical procedures. In actual practice, a combination of energy forms is applied with a selection of the most appropriate one at each particular phase or type of operation.

The available modalities for dissection in minimal access surgery include:

Endoscopic pledget dissection was first introduced at the University of Dundee in 1987. A special endoscopic pledget or peanut swab 5.0 mm ratcheted holder, manufactured by Storz (with strong jaws and inward-facing tongs at the end of the jaws for security), is used in a manner similar to that employed in open surgery. The holder grasping the pledget is introduced inside a reducer tube through an 11.0 mm cannula. The blunt dissection is safe and is used to open planes and expose structures especially when the anatomy is obscured by adhesions. The movement consists of forwarding and backward wipes accompanied by clockwise/ counterclockwise rotation of the pledget swab. It is also useful for controlled small bleeder by compressions before this is secured by clipping or electrocoagulation. The pledget swab is particularly useful for blunt dissection in Calot’s triangle during cholecystectomy. It is economical, simple to use, and maintains a dry operative field while performing a dissection. This type of dissecting modality is also utilized in homeostatically separating gallbladder from its bed, bladder from the uterus, or the rectum from the sacral attachment. 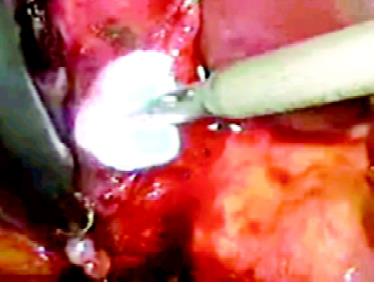 Removal of pledget must be carried out under vision, to ensure that the swab is inside the reducer tube before the withdrawal of the instrument, otherwise, there is a real risk of losing the small pledget swab in the peritoneal cavity. A pledget is an invaluable tool for the rapid dissection of loose areolar planes when it is wiped or pushed against the line of cleavage to separate the tissues.

Pledget is useful in maneuvers to control minor hemorrhage. The pledget can be placed over the bleeding point to apply pressure. When used on an oozing operative field, it absorbs some of the blood and may clarify the anatomical position.
It is important to follow the routine practice, to minimize loss of the peanut swab inside the abdomen:

•    Always use a reducer tube to insert and remove the swab.
•    Employ a safe system (ratchet and elastic band) to maintain the grip of the instrument used for insertion.
•    Keep the pledget in the view from insertion to retraction into the introducer tube. Be sure, it is retrieved into the introducer, not the cannular end. 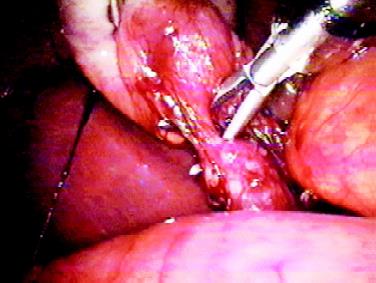 A sharp scalpel is used mainly for division by cutting. Although inexpensive, its use is restricted in laparoscopic surgery. The lack of hemostasis, the potential of injury from the tip when inserting through the port and the kinematics problems restrict its use to common bile duct division.

It is one of the most frequent methods in laparoscopic surgery. It offers the benefits of being cheap, safe, and precise operator determined action. However, being non-hemostasis renders it far from ideal as a dissecting modality. 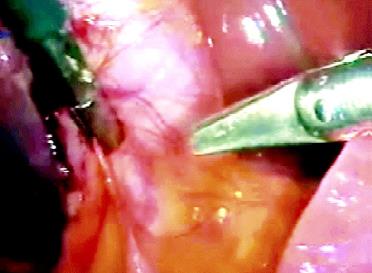 Electrosurgery is the most convenient way of dissection in minimal access surgery combined with the riskiest method of dissection. Most of the complication in laparoscopic surgery is due to the use of energized instrument (1%). 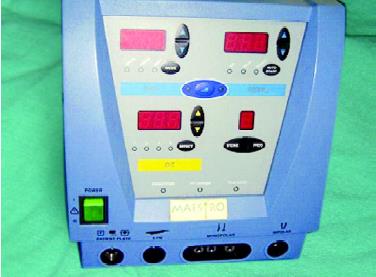 Before understanding the principle of electrosurgery following definitions should be known.

1.    Electrical current ultimately flows to the ground
2.    It always follows the path of least resistance.