The rate of serious complications associated with a laparoscopic approach is overall low. Half of the complications occur at the time of abdominal access for a camera or port placement. Complications can also arise from abdominal insufflation, tissue dissection, and hemostasis. Conversion to an open procedure may be needed to manage complications that have been identified intraoperatively, while others may be recognized in the postoperative period. Severe complications such as vascular injury and bowel perforation can be catastrophic and are the main cause of procedure-specific morbidity and mortality related to laparoscopic surgery. Improper trocar insertion causes most of the operative complications of laparoscopic surgery. Examples are injury to the bowel, major vessels, bladder, inferior epigastric vessels, and subcutaneous emphysema. Other complications include thermal injury to the bowel, abdominal wall contusions, trocar site herniation with possible bowel obstruction, and trocar- site tumor implants. However, the overall incidence of complications is relatively low (about 2%). There have been a few case reports of vulvar edema and surgical emphysema after laparoscopic surgery. The mechanism is unclear, but the condition is self-limited and resolves with conservative management. Patients with an abdominal wall hematoma from laparoscopic access who are hemodynamically stable and with no signs of hematoma expansion can be managed conservatively.

The incidence of abdominal access injury was 5 to 30 per 10,000 procedures. Bowel and retroperitoneal vascular injuries comprised 76 percent of all injuries, and almost 50 percent of small and large bowel injuries were unrecognized for at least 24 hours. The overall reported rate of vascular injury arterial or venous injury ranges from 0.1 to 6.4 per 1000 laparoscopies. Most injuries involve minor vessels; however, underreporting is common. Bladed disposable trocars with sharp blades are more likely to injure vessels compared with smooth, pyramidal tip trocars that push the vessel out of the way.


The type and proportion of organ injury during abdominal access were as follows:

•    Iliac or another retroperitoneal vein (9 percent)


Port site metastasis refers to cancer growth at a port incision site after laparoscopic tumor resection. Port site metastasis occurs after 1 to 2 percent of laparoscopic procedures performed in the presence of intraperitoneal malignancy, which is equivalent to the rate of wound metastasis after laparotomy performed under similar conditions. Mechanism of metastasis includes hematogenous spread or direct contamination by tumor cells, secondary effects from pneumoperitoneum related immune suppression, and surgical technique. Although it is not clear whether port site metastases can be prevented, suggested measures to minimize the risk of port-site metastases include the use of wound protectors and specimen extraction bags, instillation of agents to prevent tumor growth, and port-site excision.

It is shown that patients who have had prior open surgery for the intra-abdominal or pelvic disease have a higher risk of complications related to adhesions compared with patients who do not have this history. Other conditions that increase the risk of complications include extensive bowel distention, very large abdominal or a pelvic mass like large fibroid or abdominal cyst, and diaphragmatic hernia. In addition, patients with poor cardiopulmonary reserve due to severe COPD and cardiac disease may not be candidates for abdominal insufflation given the physiologic changes related to pneumoperitoneum. For patients with risk factors for complications, the laparoscopic approach and approach to abdominal access need to be carefully planned; an open approach may be preferred. If possible, these patients can be a candidate for gasless laparoscopic surgery. The frequency of complications during access technique may be related to surgeon experience and the number of the specific procedures performed for some, but not all, types of minimal access surgical procedures.

In cases of moderate hypotension, the surgeon should consider discontinuing gas insufflation immediately and reducing intra-abdominal pressure to 8.0 mm Hg. 360° scan of the abdominal cavity should be performed immediately to rule out retroperitoneal bleeding. If bleeding or expanding hematoma is seen, one should proceed immediately to long midline laparotomy and compression of the bleeding vessel. Blood should be aspirated; bleeder is exposed, and the bleeding should be controlled with vascular clamps. When necessary, the operator should obtain the assistance of a vascular surgeon.

Withdrawal of Instruments and Ports

Once the surgery is finished, all the instruments should be removed carefully under vision. All the accessory ports should be removed, and the gas is removed by releasing the valve of 10 mm cannulas. The primary port should be taken out in the end.
If the last port is suddenly withdrawn sudden suction effect of the cannula can pull the omentum or bowel inside the port wound, the chances of port site hernia and adhesion are much higher in this case. It is a good practice to insert some blunt instrument or telescope inside the abdomen while removing the last cannula out over that instrument, to prevent inadvertent entrapment of omentum or bowel. 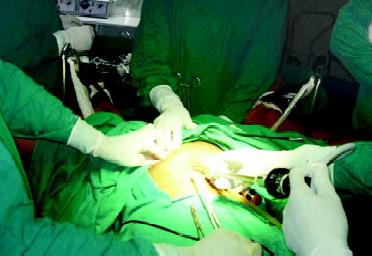 Adhesion may form if the cannula is pulled rapidly at the end of surgery P: Peritoneum, O: Omentum