The two methods of sterilization most commonly used for laparoscopic instruments.

Autoclaving by means of steam was the oldest, safest, and most cost-effective method of sterilization. When steam is placed under pressure and the temperature is raised, the moist heat produces changes within the cell protein, thereby rendering it harmless over a prescribed period of time. The relationship between temperature, pressure, and time of exposure is the critical factor in the destruction of microbes. Although steam sterilization ineffective an inexpensive it is not suitable for all laparoscopic instruments.

The growth and expansion of minimal access surgical procedures require specialized surgical instrumentation. Most of the laparoscopic instruments can be safely autoclaved but some of the laparoscopic instruments cannot withstand the prolonged heat and moisture of the steam sterilization process. Laparoscopic cameras, laparoscopes, light cables, and flexible endoscopes are damaged by heat. Therefore, alternative methods of sterilization were needed to effectively sterilize moisture-stable, moisture-sensitive, and heat-sensitive items that require rapid, frequent processing in the clinical setting.

One of the most common types of chemical sterilization uses ethylene oxide (EtO) gas, which is in use since the 1950s. EtO is colorless at ordinary temperatures, has an odor similar to that of ether, and is extremely toxic and flammable. A mixture of EtO with an inert gas such as carbon dioxide or chlorofluorocarbon (CFC) was used to make it noninflammable. The most common combination was 12 percent EtO and 88 percent freon. A newer formulation uses EtO plus a hydrochlorofluorocarbon (HCFC).
EtO sterilization depends on four parameters:

All EtO sterilizers operate at low temperatures, typically between 49° and 60°C (130–140°F) and relative humidity of 40 to 60 percent. The humidity must be not less than 30 percent in order to hydrate the items during the sterilization process. These characteristics make EtO sterilization suitable for complex medical equipment.

Both temperature and humidity have a profound influence on the destruction of microorganisms because they affect the penetration of the gas through bacterial cell walls, as well as through the wrapping and packaging materials. It typically takes between 3 and 6 hours for the sterilization portion of the cycle to be completed.

Additionally, items sterilized by EtO must be aerated to make them safe for personnel handling and patient use. The main disadvantages associated with ETO are the lengthy cycle time, the cost, and its potential hazards to patients and staff; the main advantage is that it can sterilize heat- or moisture-sensitive medical equipment without deleterious effects on the material used in the laparoscopic devices. Therefore, the EtO sterilization and aeration processes can take up to 20 hours and should be used only when time is not a factor.

Hydrogen peroxide is an oxidizing agent that affects sterilization by oxidation of key-cellular components. Gas plasmas have been referred to as the fourth state of matter (i.e., liquids, solids, gases, and gas plasmas). The cloud of plasma is composed of ions, electrons, and neutral atomic particles that produce a visible glow. Hydrogen peroxide is bactericidal, virucidal, sporicidal and fungicidal, even at low concentration and temperature. Gas plasmas are generated in an enclosed chamber under a deep vacuum using radiofrequency or microwave energy to excite the gas molecules and produce charged particles, many of which are in the form of free radicals. A free radical is an atom with an unpaired electron and is a highly reactive species. The mechanism of action of this device is the production of free radicals within a plasma field that is capable of interacting with essential cell components (e.g., enzymes, nucleic acids) and thereby disrupt the metabolism of microorganisms. The type of seed gas used, and the depth of the vacuum are two important variables that can determine the effectiveness of this process.

A solution of hydrogen peroxide and water (59% nominal peroxide by weight) is vaporized and allowed to surround and interact with the devices to be sterilized. Applying a strong electrical field then creates plasma. The plasma breaks down the peroxide into a “cloud” of highly energized species that recombine, turning the hydrogen peroxide into water and oxygen. No aeration time is required and the instruments may either be used immediately or placed on a shelf for later use. A load of surgical instruments may be sterilized in less than one hour. 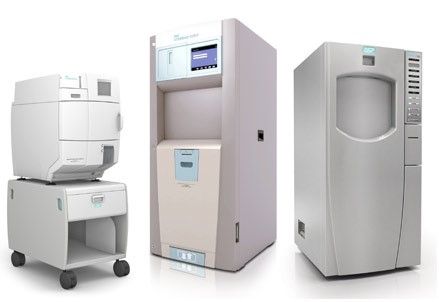 A newer version of the unit improves sterilizer efficacy by using two cycles with a hydrogen peroxide diffusion stage and a plasma stage per sterilization cycle. This revision, which is achieved by a software modification, reduces total processing time from 60 to 30 minutes. Laparoscopic instruments that cannot tolerate high temperatures and humidity of autoclaving, such as some hand instruments, electrical devices, and corrosion-susceptible metal alloys, can be sterilized by hydrogen peroxide gas plasma very efficiently. This method has been compatible with most (>95%) laparoscopic instruments.

Liquid peroxyacetic, or peracetic acid, is a biocidal oxidizer that maintains its efficacy in the presence of high levels of organic debris. Peracetic acid is acetic acid plus an extra oxygen atom and reacts with most cellular components to cause cell death. The peracetic acid solution is heated to 50 to 56º C (122–131º F) during the 20 to 30 minutes cycle. Peracetic acid must be used in combination with anti-corrosive additives.

Parameters for peracetic acid sterilizers include:

•    Relatively short cycle times
•    Availability of the items for immediate use
•    Sterilant can be discharged into the drainage system since it is not hazardous
•    No aeration time is required for the sterilized items
•    Items must be rinsed with copious amounts of sterile water after the sterilization process.

Items processed by this method should be used immediately after processing since the containers are wet and are not protected from the environment. This system must also be monitored for sterility with live spores.

An activated 2 percent aqueous glutaraldehyde solution is recognized as an effective liquid chemical sterilant. Glutaraldehyde is most frequently used as a high-level disinfectant for lensed instruments because it is non-corrosive and has minimal harmful effects on the instrument. 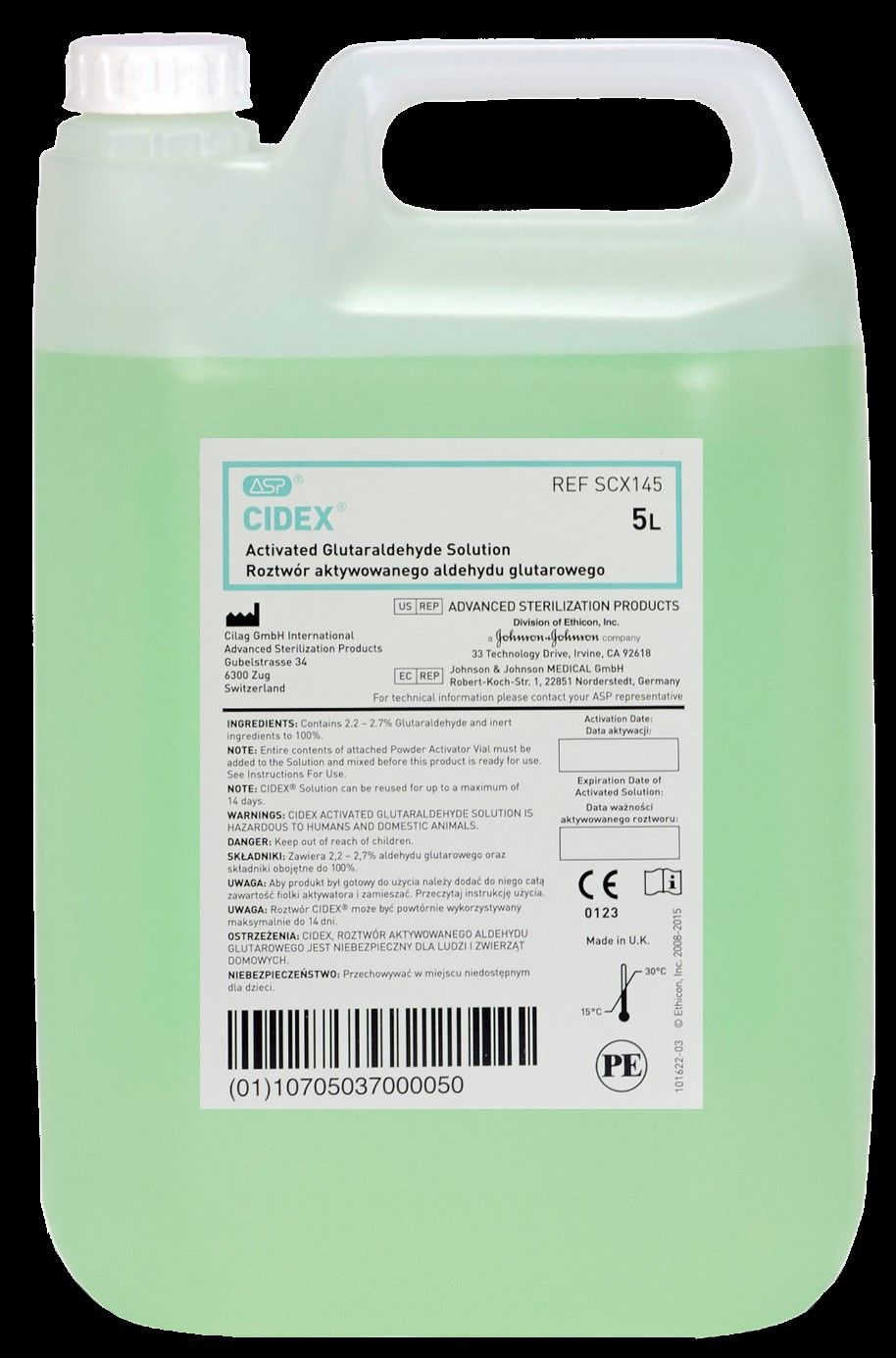 Cidex should be used a maximum of 15 times or 21 days after activation, whichever may be earlier. Once activated, the solution should be discarded after 21 days, so it is important to write the date of activation and date of expiry in the space provided on the Cidex tray. If the instrument is not cleaned properly, the activated glutaraldehyde becomes dirty just after a few uses and turns into a blackish solution. In this case, it should be rejected before a specified period of time. It is important that the surgeon should read carefully the literature provided by the manufacturer.

It has the following advantages:

•    No activation or mixing required
•    It can be used in both automated and manual reprocessing
•    Two years shelf life and 75 days open-bottle shelf life
•    Rapid 5 minutes immersion time at a minimum of 25ºC in an automatic endoscope reprocessor
•    Efficient 12 minutes soak time at room temperature (20° C) for manual reprocessing
•    Effective against glutaraldehyde-resistant mycobacterium. 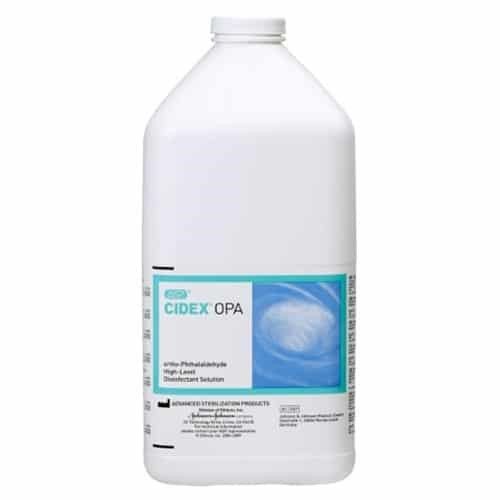 Bactericidal properties and use of formaldehyde include 37 percent aqueous solution (formalin) or 8 percent formaldehyde in 70 percent isopropyl alcohol kills microorganisms by coagulating intracellular protein. The solution is effective at room temperature.

Specially designed airtight formalin chambers are available. Eight to ten formalin tablets wrapped with moist gauge pieces should be placed in the chamber and the door should be closed. The vapor of formalin acts for one week after one-week tablets should be changed. Although known to destroy spores, it is rarely used because it takes from 12 to 24 hours to be effective. Formalin chamber is used by many surgeons to carry their sterilized instruments from one hospital to another. The pungent odor of formalin is quite objectionable and irritating to the eyes and nasal passages. The vapors can be toxic and ongoing controversy exists regarding its carcinogenic effects. However, low- temperature steam with formaldehyde has been widely used in health care facilities in Northern Europe for the sterilization of reusable medical devices that cannot withstand steam sterilization.

Recently, a non-aldehyde instrument disinfectant is available for the rapid decontamination of non-invasive and heat-labile laparoscopic instruments. It contains halogenated tertiary amines, poly hexamethylene biguanide hydrochloride, ethyl alcohol B, dodecylamine, and sulfamic acid. Contact time for bactericidal and fungicidal and virucidal protection is 10 minutes. For sporicidal protection, the contact time is 30 minutes.

Most of the laparoscopic instruments can be easily sterilized if the person knows how to disassemble, clean, and use specific chemicals for sterilization. Manufactures instruction is important to follow if the desired effect has to be achieved. Expensive instruments should be handled carefully and all the insulated instruments should be checked thoroughly for any breach in insulation before sterilization. Apart from newer generation chemical disinfectant, low-temperature steam with formaldehyde has been widely used in health care facilities in Northern Europe for the sterilization of reusable medical devices that cannot withstand steam sterilization. 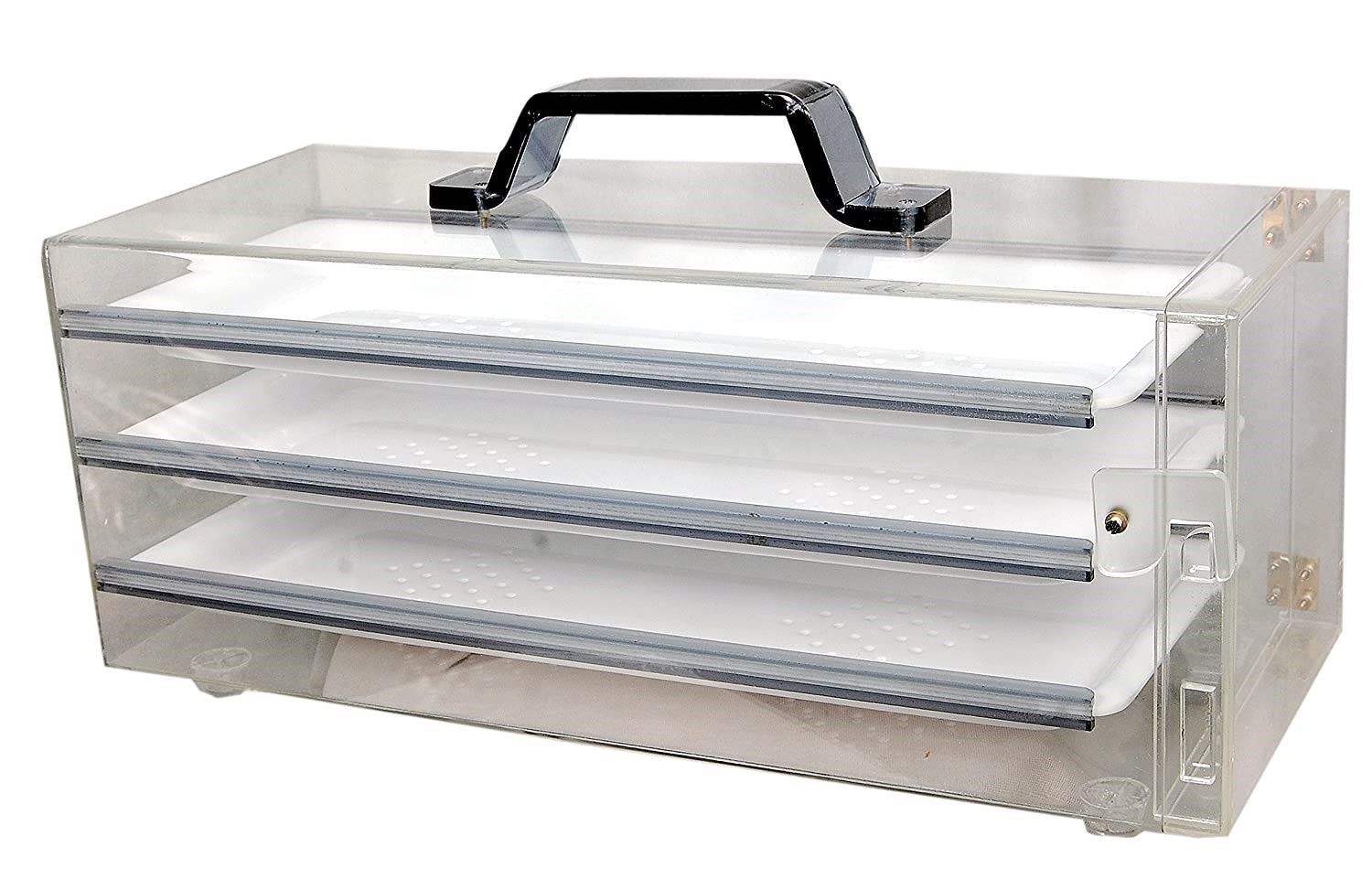 Other key considerations in the sterilization process which should be taken care of are: