Use of Tissue Morcellator in Laparoscopic Surgery

The morcellator is used to grasp the tissue to be removed and cuts it into small bits, which are forced into the hollow part of the instrument. It can be designed to remove a myoma or an ovary. It can be introduced through a 10 mm port or through the colpotomy wound.

Morcellation of Myoma in Myomectomy


Tissue Morcellator and its Complication

Uterine sarcomas and uterine fibroids may have similar signs and symptoms. At this time, there is no reliable method for predicting or testing whether a woman with fibroids may have a uterine sarcoma. The FDA recommends gynecologist share this information with patients and warns against using laparoscopic power morcellators in gynecologic surgeries to treat patients with suspected or confirmed cancer, and in women over age 50 having a myomectomy or hysterectomy for uterine fibroids.

Morcellator use with the tissue containment system 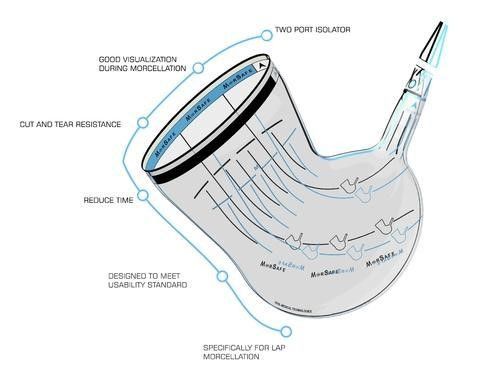 
Due to this increased risk, we continue to recommend the use of laparoscopic power morcellation only inappropriate women undergoing myomectomy or hysterectomy. In addition, it is good that when morcellation is appropriate, only contained morcellation be performed. MorSaf is an innovative single-use disposable device intended to be used as a receptacle for benign tissue mass during gynecological procedures such as laparoscopic myomectomy or laparoscopic hysterectomy. MorSaf is to be used in conjunction with the morcellator to safely contain and remove the shredded benign tissue mass. The device has unique features to allow for quick deployment, insufflation, morcellation, and spill-proof withdrawal of the bag. MorSafe, with its unique two-port design, offers the surgeon superior visibility during the surgery compared to a single port approach. Designed to fit and take the shape of the abdomen, it has been constructed utilizing a special tear-resistant material to prevent leakage. It also contains a special ring in the bag opening to allow the surgeon ultimate control of the bag opening and easy access to the interior of the bag during surgery.