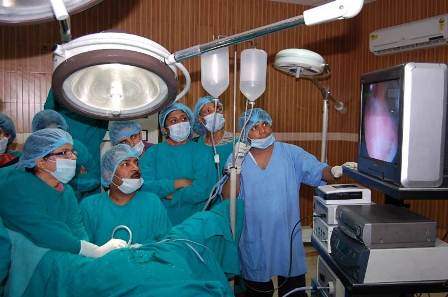 Many patients assume that, like prescribed drugs, surgical procedures and instruments undergo in depth testing and should be government-approved. It is not essentially thus.

Developers, of course, do check new instruments, and practitioners usually train with an expert before utilising them independently to treat patients. And the regulatory mechanisms should ensure an instrument's safety and effectiveness before it will be marketed -- but as long as the device is deemed considerably different from others already approved.

A less-invasive technique to remove uterine fibroids is quick and effective, however it’s potential for serious complications has recently become apparent.

Surgical techniques, however, aren't subject to the rigorous approval process that medications undergo. And like drugs, issues with new procedures might not become apparent till after they have been used several hundreds or thousands of times.

Such is the case with a preferred treatment for a really common medical problem: uterine fibroids. The technique, referred to as electric or power morcellation, has widespread charm for both surgeons and patients. It’s used throughout laparoscopic or robotic-assisted operations that are quick and effective, need solely a small incision or none, and involve less pain, a short hospital stay and a faster recovery. In most cases, these operations are safer than traditional surgery.

As recent reports have shown, however, power morcellation may also cause serious and occasionally critical complications. Specialists say that prospective patients are usually not told regarding these risks before consenting to the operation.

The technique involves insertion of a small instrument with a quickly rotating blade, the morcellator that shreds the fibroid such that it may be sucked out through the tiny opening of a laparoscope. However issues may arise months or years later if pieces of tissue escape into the pelvic cavity and seed themselves on different organs.

This downside is all the more serious if the fibroid that was morcellated happens to have contained a hidden cancer. Though the overwhelming majority of fibroids are benign, there's no sure way to tell before their removal if they harbour a cancer that happens in one in four hundred to one in 1,000 cases.

Unexpected sarcoma than is currently quoted to patients considering the procedure.

Data shows uterine morcellation carries a risk of spreading unexpected malignancy with apparent associated risk of mortality much above appreciated presently. Even benign uterine tissue, when it's spread to different components of the abdomen during morcellation, may grow in places it does not belong and cause pain, infection or bowel obstruction.

There is a method that might make morcellation safer: encasing the tissue to be removed in a bag before it's broken up. However so far, the procedure is occasionally used, and few surgeons are trained in the technique.

Fibroids are very common, affecting half or more ladies during their reproductive years, when hormones support their growth. Fibroids develop from the smooth muscle tissue of the uterus, ranging in size from small to large, and frequently shrink post pregnancy and menopause.

Most women with fibroids are unaware they have them, however others may experience symptoms like prolonged heavy periods, excessive bleeding between periods, pelvic pressure, frequent micturition, backaches and anaemia. They may sometimes cause sterility or miscarriage.

Fibroids are usually detected through a pelvic examination, sonogram or magnetic resonance imaging, sometimes with saline solution or a dye accustomed better outline their size used to.

Nothing needs to be done about a fibroid that causes no distress. Large, irritating fibroids may typically be shrunk by many months of treatment with medications that block oestrogen and progesterone, inflicting temporary menopause and its attendant symptoms.

The drug Mifepristone (RU-486) can also shrink fibroids, and Evista might do likewise, however solely in postmenopausal ladies. Sometimes a low-dose oral contraceptive pill is employed to scale back bleeding caused by fibroids without shrinking their size.

Non-invasive ultrasound surgery underneath magnetic resonance imaging guidance may be used to heat and destroy a fibroid while not damaging the uterus. A fibroid can also be destroyed by injecting tiny particles into uterine arteries to chop off its blood supply.

Fibroids may be removed laparoscopically or robotically without damaging the uterus. If the fibroid is contained inside the uterus, it may usually be removed with surgical instruments inserted through the vagina and cervix. Some fibroids could also be destroyed by applying heat or electric current to the uterine lining.

Very large, multiple or deep fibroids might need more conventional surgery, referred to as an abdominal myomectomy, that spares the uterus, or with a hysterectomy, a more serious operation involving removal of the whole uterus, ending a woman's menstrual periods and ability to bear kids.