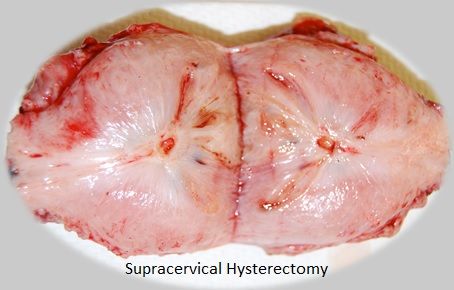 Hysterectomy is one of the most common surgical procedures performed all over World. It is done for a variety of reasons including fibroids, which are benign tumors of the uterus, uncontrolled menstrual bleeding, and pelvic pain, as well as other indications. Hysterectomies are performed in a number of different ways. The traditional abdominal hysterectomy is done through either a small “bikini” type incision through the lower abdomen or occasionally an incision that’s made from the bellybutton down to the pubic bone in the middle. When a hysterectomy is performed in this manner the patient does experience significant discomfort from the incision itself and the general recuperation time is approximately six weeks. A smaller number of hysterectomies in the United States are done through the vagina. In a vaginal hysterectomy, the uterus is removed through the vagina starting with the cervix and then disconnecting the rest of the uterus after which the uterus is removed through the vagina. This surgery is generally better tolerated than the abdominal type and patients have approximately a four-week recovery with less pain.

Gynecological complications can significantly reduce the quality of life for some women. Often, with complications involving pain and abnormal bleeding, women find even activities of daily living can become quite challenging.

While many women opt for total hysterectomy, removing the cervix, the use of supracervical hysterectomy is becoming increasingly more common as it was prior to the 1950s. The difference, today, is the method by which the hysterectomy can be performed, supracervically, without imposing extensive invasive surgery upon a woman.

The advantages of a laparoscopic supracervical hysterectomy are:

The greatest argument for not proceeding with the laparoscopic supracervical hysterectomy lies in the retention of the cervix itself. While some physician would argue the cervix should remain in place to ensure cervical screening for cancer can be performed, others argue the very presence of the cervix may place a woman at risk for cervical cancer. This is a gynecological debate that continues and must be weighed through your surgeon's advice and expertise. Most physicians, however, state the presence of the cervix does not pose a great risk but, instead, simply allow for screening to be done more efficiently. In terms of cost, there are few differences associated with the costs of surgery and recovery when comparing the types of hysterectomy procedures. Therefore, cost is generally not considered a factor.

For most women, the choice to proceed with a laparoscopic supracervical hysterectomy is often based on the speed by which recovery can be expected. With a more expedient recovery, many women find they can resume normal living activities and often return to work much sooner than other, more invasive hysterectomy procedures. When considering your options, therefore, it is important to consider not only timing but also the impact and need for cervical screenings of the future as these may determine which hysterectomy procedure you choose.

The advantages of a LSH (in comparison to a TLH) are:

Limitations to the laparoscopic supracervical hysterectomy:

Although most hysterectomies can be performed laparoscopically, there are some limitations. For instance, if the size of the uterus is greater than 22 weeks in size, the fundus (the top) of the uterus reaches above the level of the umbilicus (belly button). When the laparoscopic camera is placed through the umbilicus to visualize the pelvis and the uterus, the visualization is poor and the laparoscopic access is challenging. As a result, it would significantly increase the risk of the surgical procedure. As a result, it would be recommended a total abdominal hysterectomy rather than a laparoscopic hysterectomy simply based on patient surgical safety.

The laparoscopic supracervical hysterectomy allows you to return to your normal activities sooner and also provides a higher degree patient satisfaction. But you must meet the proper indications for this procedure. The indications include: (a) Your physician has recommend a total abdominal hysterectomy and you are looking for a more minimally invasive option (b) Large fibroid uterus (c) Heavy menstrual cycles and failed medical management (e.g. failed birth control pills / progesterone) (d) Dysfunctional uterine bleeding (e) Adenomyosis (f) Failed endometrial ablation (e.g. Novasure, Thermachoice, etc)