Stump appendicitis is scheduled from the recurrent inflammation with the residual appendix as soon as the appendix continues to be only partially removed in an appendectomy for appendicitis. Appendectomy is one of the most frequent surgery performed all over world. Obstruction with the appendiceal orifice by fecalith, lymphoid hyperplasia, or neoplasm remains to be the most likely causative factor. Progressive appendiceal luminal distention compromises lymphatic and vascular flow, causing appendiceal wall ischemia accompanied by consequent bacterial invasion, inflammation, and frank perforation if surgical treatment is delayed. Perforation at presentation ranges from 16% to 30%, and it is significantly increased by the delay in diagnosis usually seen at extremes of aging or atypical presentation. Treatment solutions are appendectomy, and postoperative complications include wound infection, bleeding, intraabdominal abscess, small-bowel obstruction, and, rarely, stump appendicitis. Residual appendiceal tissue left before laparoscopic appendectomy may predispose to the rare progression of stump appendicitis. Stump appendicitis means the interval repeated inflammation of remaining residual appendiceal tissue after an appendectomy.

Cause of Stump appendicitis: 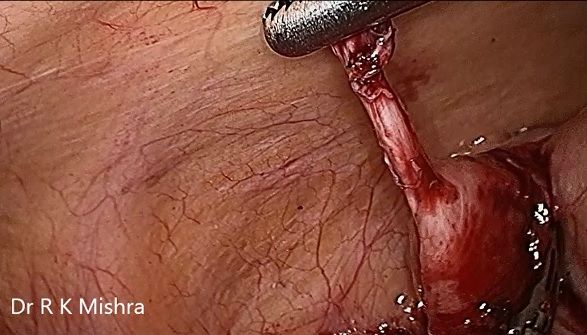 Several factors influence the occurrence of stump appendicitis. One very common dilemma is the correct identification in the lower appendix, ie, the cecal appendiceal junction. Misidentification from the cecal appendiceal junction usually occur more regularly with extensive inflammation from the appendix, which could, but won't necessarily, extend on the cecum. Additionally, a whole or partial retrocecal lying appendix, ie, the camp is retrocecal or a section of the appendiceal shaft lies retrocecal and the tip turns back and is also easily visualized intraperitoneally and then the area of the appendix that disappears within the retrocecal area is misidentified as the base and falsely transected leaving a stump behind.

The laparoscopic appendectomy has become well studied and possesses been discovered to be equivalent to the greater traditional open technique in overall capability to adequately remove the inflamed appendix. You have the notion that stump appendicitis is a new phenomenon that mainly occurs in laparoscopically performed appendectomies where surgeon may leave a portion of appendix. No less than theoretically, you have the potential for an elevated incidence of stump appendicitis in laparoscopic surgery due to lack of a 3-dimensional perspective, as well as the absence of tactile feedback. Subsequently, a longer stump may be left behind. However, in sharp contrast to this particular theoretical assumption stands the reality that 66% of the reported cases occurred after open appendectomies. However, laparoscopic appendectomies really are a quite recent procedure in comparison to the more proven and historic open technique and thus, there can be some merit towards the above assertion.

A medical history of previous laparoscopic or open appendectomy may delay the best diagnosis of stump appendicitis in a patient presenting with signs and symptoms of a right lower quadrant inflammatory process, as well as the correct diagnosis may be determined after perforation from the appendiceal stump has occurred. CT findings might not be as specific as those seen in our patient, and awareness that stump appendicitis can occur, joined with an increased index of suspicion, may be required to point out diagnosing. CT findings inside the number of cases described inside the literature include pericecal inflammatory changes, abscess formation, fluid inside the right paracolic gutter, cecal wall thickening, as well as an ileocecal mass. A unique diagnosis can be created preoperatively when inflammatory changes surround a distended appendiceal stump.

After a proper diagnosis of stump appendicitis has been made, the policies of appendectomy remain consistent relating to the traditional and laparoscopic associated with that eliminating the complete affected structure should be carried out with appropriate visualization in the anatomical landmarks. Therefore, laparoscopic surgeons need to have a heightened understanding the potential for stump appendicitis, know the appendiceal base correctly second time while dealing with stump appendicitis and take the appendix without leaving a stump to reduce potential risk of stump appendicitis. In case a CT scan has been obtained, it enables exquisite delineation from the anatomy including the length of the remnant.

Stump appendicitis is a and sure underreported disease process in gastrointestinal surgery. Although an uncommon complication after appendectomy, it can and does occur after both laparoscopic and open appendectomies. It really is not definitely determined perhaps the incidence with this is definitely increasing with laparoscopic appendectomies as claimed by some. Stump appendicitis can certainly represent a diagnostic dilemma when the treating physician is not aware this uncommon phenomenon. During surgery, a severely inflamed completely or partially lying retrocecal appendix could be one of several allies leading to the misidentification in the cecal appendiceal junction. And a stump beyond 3mm put aside during the initial surgery can cause appendicitis after appendectomy. Surgeons therefore must fall back on their training of anatomy, specially in difficult cases where severe inflammation exists. A thorough exploration and meticulous dissection with the critical look at the appendiceal- cecal junction is fundamental to prevent this potentially devastating complication. This can be facilitated through elevation with the appendix, toward the abdominal wall, providing mild tension, which will assist the dissection in the significantly inflamed tissue planes.