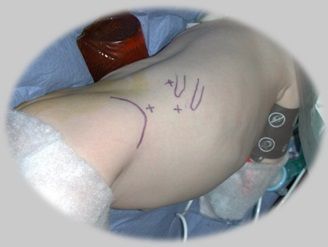 The lumbar sympathectomy was initially utilized for the treatment of ischemic and painful disorders of the lower limbs. This treatment, which was popular among vascular surgeons, remained unchanged for several decades. Its use slowly decreased after 1960, when arterial reconstruction techniques were introduced. It is still useful for some patients with vascular diseases; however, it is particularly useful in the treatment of plantar hyperhidrosis.

Primary hyperhidrosis is the most frequent indication for sympathectomies, both lumbar and thoracic. This disease affects about 1% of the population and is characterized by excessive sweating in specific regions of the body such as the hands, face, scalp, axilla and feet. The endoscopic thoracic sympathectomy (ETS) is indicated for the treatment of palmar, axillary and craniofacial hyperhidrosis. The results of plantar excessive perspiration, however, are less expressive. Many patients with Primary hyperhidrosis who have undergone ETS still continue to experience excessive sweating of the feet after surgery.

The endoscopic retroperitoneal lumbar sympathectomy (ERLS) is efficient in the treatment of PHH isolated from or associated with other affected areas that persisted after ETS. It is believed, however, that there could be a worsening of compensatory sweating (CS), when adding the effects of ETS to the lumbar regions of the same patient. It is highly probable that suppression of one more segment of the sympathetic chain could actually increase CS. This is one of the principal doubts concerning lumbar sympathectomy.

Hyperhidrosis, or excessive sweating, is a physiological disorder that affects 1-3% of the population. It can occur in areas of the body that possess a concentrated amount of sweat glands, for example, the hands, axillae, and feet. Many conservative modalities of treatment are available for this condition such as topical aluminum chloride solutions, oral anticholinergic medications, iontophoresis machines, and even botulinum toxin injections. However, there are a multitude of hyperhidrosis patients who do not appropriately respond to conservative management and a more advanced approach is indicated.

Retroperitoneoscopic lumbar sympathectomy by unilateral access seems to be feasible when performed by a surgeon with experience on advanced laparoscopy. Larger series comparing unilateral to bilateral access are necessary to establish the real benefits and potential disadvantages of this new technique.

Buerger's disease is characterized by peripheral ischemia of an inflammatory nature with a self-limiting course. Shionoya's criteria for the diagnosis of Buerger's disease are smoking history; onset before age 50; infrapopliteal arterial occlusion; either upper limb involvement or phlebitis migrans; absence of atherosclerotic risk factors other than smoking. Buerger's disease is the most common cause of peripheral vascular disease (PVD) in India. The majority of patients present with an advanced stage of ischemia; hence, most of them require surgical intervention in the form of either lumbar sympathectomy, omentopexy, or major or minor amputations.

No significant complications were encountered in the study. Postoperative pain at the operation site was negligible and so was the need for analgesia. The patients were discharged within 1 to 2 days and returned to work after 1 week. Our patients were from low socioeconomic strata; therefore, the quick return to work was a clear advantage over the longer recuperation time required after open surgery.

Follow-up of the patients ranging from 12 to 19 months has not revealed recurrence of the disease, which proves the efficacy of retroperitoneoscopy as an alternative to conventional procedures.

Despite limited experience with this procedure, retroperitoneoscopic lumbar sympathectomy is a safe and effective procedure for patients with advanced Buerger's disease requiring lumbar sympathectomy. It has a short convalescent time with minimal morbidity. It appears to be a viable alternative to open procedures. Besides, Retroperitoneoscopic resection of the lower lumbar sympathetic trunk is a safe and effective procedure for obtaining suspension of excessive sweat secretion in patients with plantar hyperhidrosis that cannot be treated with conservative methods.