Despite the evidence that vaginal route of surgery is associated with faster recovery and fewer complications, almost 50% of hysterectomies all over World are done abdominally. For female the main indication for vaginal hysterectomy remains the treatment of utero-vaginal prolapse whereas the other common indications of surgery like enlarged uterus, menstrual abnormalities are treated by the abdominal route by abdominal hysterectomy. For gynecologists until and unless uterus is associated with a significant degree of prolapse they are reluctant of doing vaginal hysterectomy. This may be attributed to personal preference by many gynecologists but mainly to lack of adequate training or experience leading to a reluctance to perform the procedure of NDVH by vaginal route in cases of enlarged uterus, absence of uterine descent, previous pelvic surgeries or when hysterectomy has to be combined with bilateral salpingo-oophorectomy.

Taking large uterus out in laparoscopic hysterectomy is one challenge which can be be overcome by bisecting the uterus. These views are held despite the evidence that the above factors are no more than relative contraindications for the vaginal route. Various publications and numerous literature also describe the use of vaginal hysterectomy in these situations. 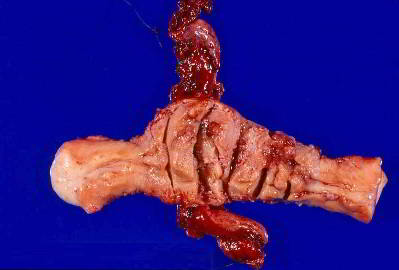 Bisection is the most frequently used technique to retrieve the uterus through the vagina. Cervix is grasped by volsellum or tenaculum bilaterally as you are seeing in the video above and the uterus was bisected in antero-posterior direction with knife with progressive reposition of volsellum till the fundus was reached and pedicles clamped. Bisection of Uterus is one of the important technique which is used in NDVH, LAVH as well as TLH. In a few cases complete bisection is required so that one half of the uterus could be delivered out into the vagina and pedicle secured.

The cervix should be grasped on both sides and the uterus should be bisected sagittally towards the fundus, using a knife. The bisection, carried out first along the posterior uterine wall, should be aided by the repeated repositioning of the vulsella close to the apex of the incision, combined with rotation of the cervical portion of the uterus around the pubic arch. If necessary, the uterus should be rotated back to its original position and the bisection pursued anteriorly. Complete bisection often allowed half the uterus to be delivered through the vagina and the ovarian pedicle to be secured; the same was then done with the other half of the uterus. Even the uterus with myoma is frequently combined with bisection or morcellation. Smaller myomas can be removed in one piece while larger ones is morcellated and removed in fragments, one of the vulsella always being attached to the residual bulk of the myoma. Morcellation is carried out on the uterus when despite bisection or myomectomy no further descent is possible. Bisection is recommenced as soon as further descent of the uterus could be achieved after myomectomy and morcellation. Coring is also performed instead of bisection when dealing with smaller uteri without any distinct large myoma. A circumferential incision is made at the level of the uterine isthmus about 5 mm into the substance of the corpus to facilitate easy retrieval. A central core of tissue around the uterine cavity is then excised by progressively undercutting the serosal surface of the uterus towards the fundus. Once the uterus is delivered into the vagina, the hysterectomy was completed in the usual fashion.

Apart from taking of tension on the ligament allowing the descent of the uterus it also helps in removal of small myomas during the course thus reducing the bulk of the uterus. The protection of bladder, rectum and vagina is very important in such procedures and this protection is achieved by using proper vaginal speculum. The two or three vaginal speculum, is used. The Upper vaginal speculum will protect the injury of bladder where as the speculum which is applied below will protect the rectum from getting injured. the third speculum can be used to protect the injury of labia majora and minora. Some gynecologist they like to give labial suture also to prevent injury injury and to get proper visualization.

In Lash procedure (coring) the uterine wall was cut circumferentially few mm at a time maintaining constant traction of the cervix all the time. As the fibres are cut the uterus IN LASH TECHNIQUE the uterus slowly elongates. The next series of incisions in uterus are given at a higher level till the fundus could be delivered out. Only bisection is required in 90 percent of patients while lash technique is sufficient in 10 percent of patients. Once the uterine fundus could be delivered slowly by bisection or coning into the vagina the hysterectomy is completed in the usual fashion without any problem. Myometrial coring may times fails than bisection-morcellation, especially in the case of a narrow uterus. Postoperative fever is also found in some patients significantly more common after myometrial coring. Both these techniques should be taught to resident gynecologist.