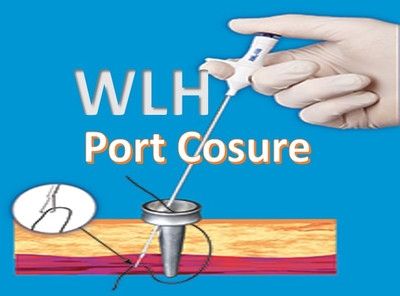 Minimally invasive surgeries are the advantageous and cosmetically better surgical procedures now a day. But laparoscopic trocars do create wounds. It is necessary to close these wounds with a good technique in order to decrease the complications related to port-site complications, specially hernia.

This article is to review and list different techniques used for closure of port-site wounds.

A literature search was performed for the articles related with techniques of closure of trocar sites. For this purpose, the search engines used were Google, High Wire Press and Springerlink. Only those techniques which include the usage of suture materials, suture carriers and various needles were reviewed in this study. Special devices made for port-closure are not reviewed here.

The articles described many techniques including classical closure using curved needles, including the Grice needle, Maciol needles, spinal needles, dual hemostat, suture carrier, modified Veress needle with a slit made in retractable brunt tip, dental awl with an eye, prolene 2/0 on straight needle aided by Veress needle, straight needle armed with suture, modified Veress needle bearing a crochet hook at tip. Foley catheter threaded through port-hole for elevation of fascial edge upon traction, fish-hook needle improvised out of a hypodermic needle by bending it to 180 degree, U-shaped purse-string suture placed in the fascia around port-hole.

There are plenty of techniques for closure of trocar-site wounds, all of them are effective in closing the fascial defect of abdominal wall.

In 1996, the modern era of laparoscopy started with invention of Hopkin-Rod system by Professor Hopkins.1 Minimally invasive surgeries are the advantageous and cosmetically better surgical procedures now a days. But laparoscopic trocars do create wounds. So any surgeon whether a neophyte or an expert, needs a systematic approach to exit the abdomen after any laparoscopic procedure. It is necessary to close these wounds with a good technique in order to decrease the complications related to port-site complications, specially hernia. Precise anatomical closure of abdominal wall fascia of port-sites 10 mm or larger. Because larger ports can cause increase in possibility of complication following surgery.2 These complications include incisional bowel herniation as well as bowel obstruction.3, 4 Many techniques and devices have been introduced into practice to minimize risk of port-site complications which occur in 1 to 6% of cases.5, 6 it is recommended that all 10 and 12 mm trocar sites in adults and all 5 mm port sites in children be closed, incorporating peritoneum into fascial closure.7-10 A number of techniques have been developed in attempt to prevent trocar-site hernia, but there is still no gold standard. Traditional suturing techniques have been used, but proven to be blind closure of fascial defect.11 Therefore many modified techniques using various devices and needles have been developed to facilitate the aim of prevention of trocar-site hernia.

A literature search was performed for the articles related with techniques of closure of trocar sites. For this purpose, the search engines used were Google, High Wire Press and Springerlink. The term used for search was port site closure techniques. All the articles dealing with port-site closure methods were reviewed along with their references.

Grice needle: It was used by Stringer et al13. It was inserted into the abdomen at an angle by the side of trocar site to close. Then under direct telescopic vision the needle was placed through both peritoneum and fascia. Within abdomen, the suture was grasped and removed from Grice needle with a grasper inserted from opposite trocar. The Grice needle was then removed and reinserted at opposite site of previous puncture at an angle to trocar site. The suture was again grasped with Grice needle and pulled out of the abdomen. After complete removal of trocar, the suture was tied under direct laparoscopic visualization.

Maciol needles: Contarini14 used these needles. They are the set of 3 needles which unclude two black handled introducers, one straight and one curved, and a golden-handle retriever. The introducer needle is used to pass suture through abdominal wall into peritoneal cavity from subcutaneous tissue. The retriever needle (needle with a barb) is then passed into abdomen on opposite side of the defect to retrieve suture, and then pulled back through tissue. The procedure is performed under direct telescopic visualization before trocar withdrawal and does not require skin incision enlargement.

Vein catheter, spinal needle and angiocath were used by Nadler et al15 under direct laparoscopic visualization. No.-0 polypropylene suture is threaded through a 15 gauze needle and inserted along the umbilicus at angle of 45 degree from the distance of 0-5 to 1cm. after piercing an endograsp forceps is used to pull the free edge of suture edge into abdomen. It goes all around umbilicus, penetrated all layers of subcutaneous tissue including fascia and create a purse string suture by continuously running stiches. The whole procedure is repeated three times until the purse string stich is made. For use of angiocath, a 14 gauze aniocath is used with a 50cm no.-0 braided polyglactin suture. Angiocath and suture are inserted through all the layers of fascia one on side of port-wound under laparoscopic visualization. The needle and suture are placed exactly in the middle of one side of port-wound. Then the assistance grasps the suture from another 5mm port and needle is removed, suture feeded into abdominal cavity of about 10-15cm length. Then a 5mm grasping forceps is inserted through subxiphod or other port and suture removed from abdominal cavity. These four steps are repeated by passing another preloaded angiocath needle and suture through mid-point of other side of trocar-wound. Ends of the suture are tied together with square knots. Knot is then reduced into peritoneal cavity by pulling on one or both ends of tied suture. The fascia is then closed and suture tied under direct vision through laparoscope.

The 5mm trocar technique: Rastogi and Dy16 developed a simple technique using curved needle and sutures for closure of rectus sheath defects at trocar-wounds. First with 5mm telescope they inspect the defect from inside of abdomen and then pass a hemostat through the incision. Then under direct laparoscopic vision the peritoneum and rectus sheath are grasped and pulled through incision, thus by facilitating the passage of needle. Chatzipapaset et al17 developed a similar closure technique using standard suture with straight needles with a 5mm laparoscopic grasper and a 4mm hysteroscope.

The port to be closed under direct vision of surgeon in this group and for this purpose good insufflation of abdomen is a pre-requisite. But if desufflation is performed then a tactile feedback should be used to close the port-wound. These techniques are applicable during insufflation and desufflation. They include suture carrier, the dual hemostat technique, the Lowsley retractor and application of bioabsorbable hernia plug in trocar sites.18 it inclused priliminary fascial stay-suture placement above and below trocar-wound, floey’s catheter threaded throught the port-hole for elevation of fascial edge for traction, fish-hook needle improvised out of a hypodermic needle by bending it to 180 degree and a U-shaped purse-string suture placed in the fascia around port-hole.

Suture carrier: Jorge et al19 and Li and Chung developed this carrier making use of vertical rather than horizontal space. It is a hook suture carrier modified from a simple hook retractor with an eye drilled into the tip through which suture can be threaded. Its handle is 24cm long and size approximated the size of general closure needle (CT needle, Ethicon, etc). to start closure, the edge of fascia is lifted vertically with a hook retractor and the suture carrier is partially inserted into the wound to catch peritoneum and fascia under direct vision, piercing it from the undersurface. Then 0-polypropylene suture is threaded into the exposed eye of carrier and brought beneath the fascia. Then the suture is passed from the edge of opposite wound with carrier and taking a single stich from in to out. Then a simple stich is taken with knot on the surface of port-wound.

Dual-Hemostat Technique: Spalding et al20 used this technique using two hemostats and a needle holder with suture and needle. First hemostat is placed into the wound. Then the tops are spread open and the fascia is lifted awau from underlying viscera. Then second hemostat is used to retract overlying subcutaneous tissue. Then the suture needle is passed through the fascia to exit between the splayed tips. This procedure is repeated at the opposite side of wound also.

Incidence of port-site hernia is about 0.23% at the 10mm port-site and 1.9% at the 12mm port-site. This incidence drastically gets increased to 6.3% when patients are obese with BMI greater than 30kg/m2. This complication arises after laparoscopy when there is failure to reapproximate fascial wound edges of the big trocar wounds, infection, premature suture disruption. A bulge either on coughing or even without it at a previous trocar-site should immediately raise suspicion of a trocar-site hernia.22

Hernia at trocar-sites is classified into three types: The Ritcher hernia usually presents few days later and patient experiences delay in realizing its occurrence due to normal bowel function which causes significant morbidity. It is a rare complication but a dangerous one. Usual symptoms include crampy abdominal pain with nausea and/or vomiting. Treatment is reduction of the bowel which is incarcerated followed by repair of the fascial defect. Some authors advocate open repair of hernia or local exploration combined with laparoscopy, but the minimally invasive approach is an acceptable treatment at the time of diagnosis but only as long as the incarcerated bowel is not ischaemic.23 Risk factors for the development of trocar-site hernia are diameter of the trocar-site, trocar design, pre-existing fascial defects, some surgeries and patient-related factors.24 many authors believe that inserting a 10mm trocar in an oblique fashion or Z-tract will reduce hernia formation by putting the external and internal defects in different levels. So it is recommended that all 10 and 12mm size trocar-wounds must be closed. At the end, the perfection of all closure techniques has proliferated and improvements are continuously being made. But the surgeon must be familiarized with the useful port-closure techniques which he/she feels comfortable with, easy to perform, simple, safe and effective.25

The comparisons among all these techniques are beyond the aim of this literature review. It is suggested that tighter closure of the skin incision may control the leak of ascetic fluid in patients with ascitis, but only for a short time. The tight closure of fascia may prevent the ascitic fluid leak.26 For the closure of skin, the transcutaneous closure with absorbable suture material seems to be the most suitable technique.27