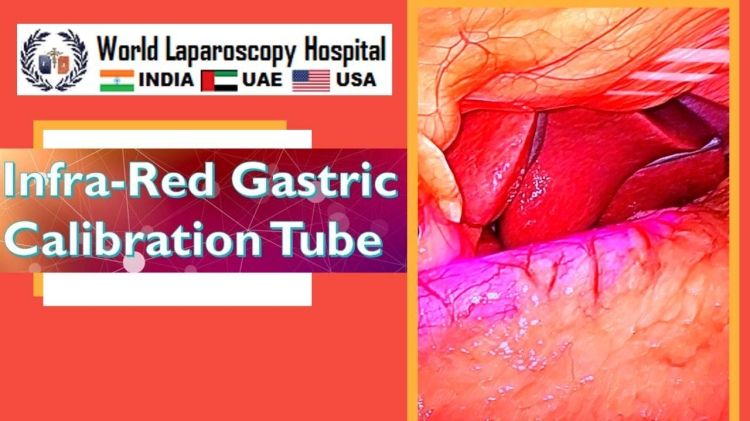 INTRODUCTION
Obesity is associated with multiple adverse effects on health which can be improved with weight loss. Limited long-term success of behavioural and pharmacological therapies in patients with severe obesity has led to increased interest in surgical options in recent times namely sleeve gastrectomy, plication of greater curvature of stomach, roux – en- y gastric by-pass, biliopancreatic diversion with duodenal switch and etc1. All these procedures may result in significant weight loss in well-informed and motivated patients with higher BMI ( > 35)1. These procedures involve making changes to your digestive system. Some procedures limit how much you can eat, while others work by reducing the body's ability to absorb nutrients and some procedures achieve both. Gastric bougie used in bariatric procedures helps to calibrate the stomach during resection of the stomach as in sleeve gastrectomy and prevent excessive narrowing near incisura and also helps assessing proper closure of hiatus hernia2.  Plication of the greater curvature of the stomach simulates the results of laparoscopic sleeve gastrectomy but with fewer complications3. Near-infrared (NIR) light penetrates relatively deeper into biological soft tissues but varies with tissue constituents such as water, fat, collagen, and their combination ratio4. The aim of the study was to apply the near infra-red-light property to a conventional gastric bougie and understand its role during surgery.
MATERIALS AND METHODS
PLACE OF STUDY
The study was done at world laparoscopy hospital, from the department of Minimal Access Surgery with prior pilot study done on animal after approval from the Committee F or the Purpose of Control and Supervision of Experiments on Animals on 25th September 2019 (Approval number- 25/17/209).
PREPARATION OF THE NEAR INFRA-RED GASTRIC BOUGIE
The device preparation requires the following materials, a 39 F transparent tube5 of 75 cm, two rows of eight LEDs (850 nm, 1.5 volts, 100-watt, 30 mA) to cover a distal 20 cm of the tube, an LED blinker, light intensity controller (Fig 1A & 1B). Inside the tube, one row of eight 850 nm LED light bulbs each are connected in series and spirally wrapped around a plastic rod and inserted into the transparent tube. The tube is then sealed at the distal end and only a small opening is made on the wall of tube for suction port. The wires were then connected to a 24-volt PWM (Pulse with Modulation) intensity regulator. A flasher was then connected in series for blinking feature of the device and this was achieved with connecting a two-way switch. This setup was then connected to an adapter and finally to a power source (Figure 2). 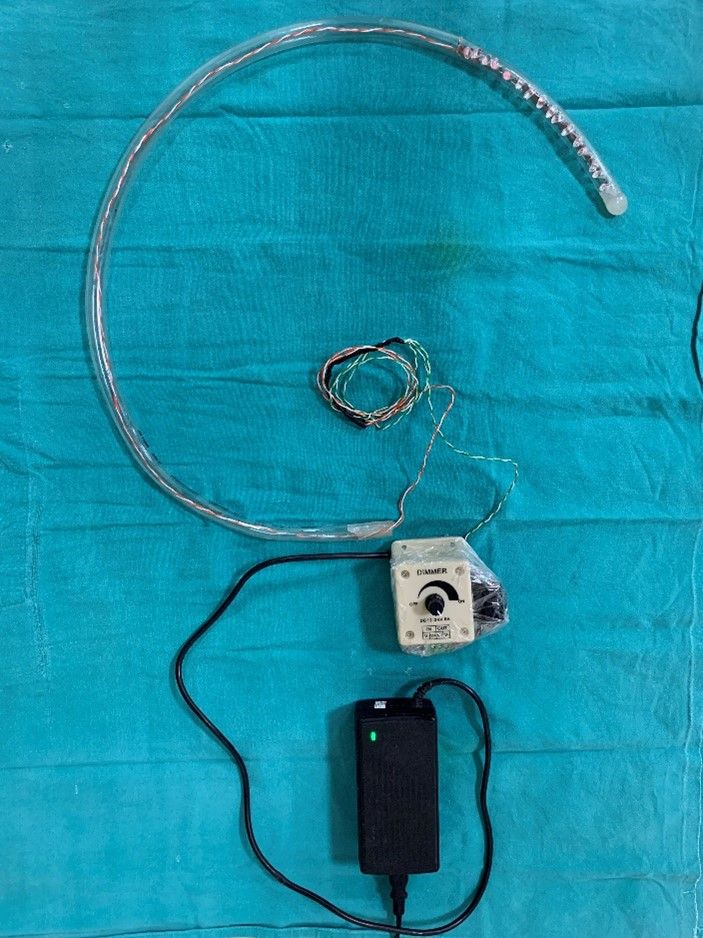 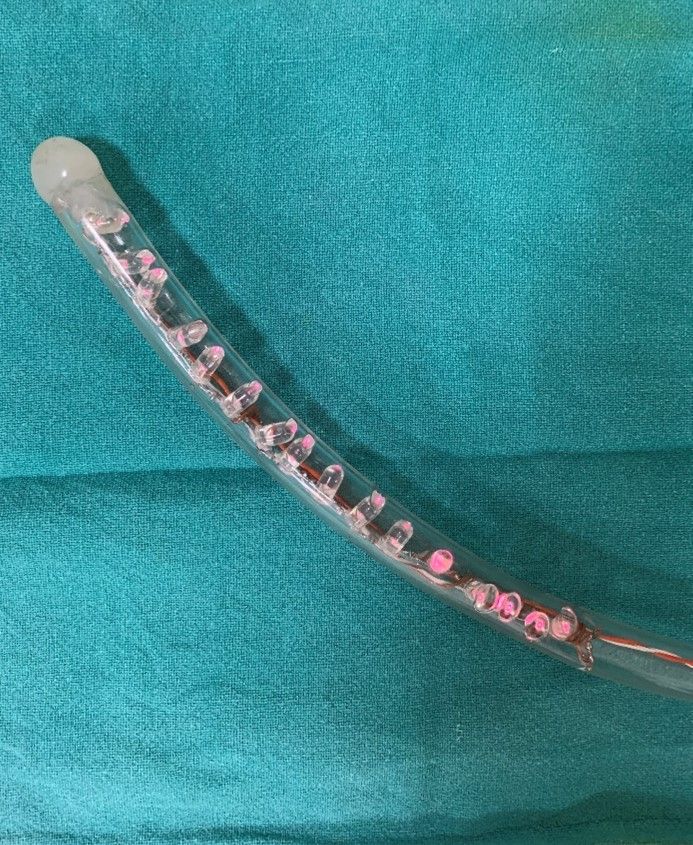 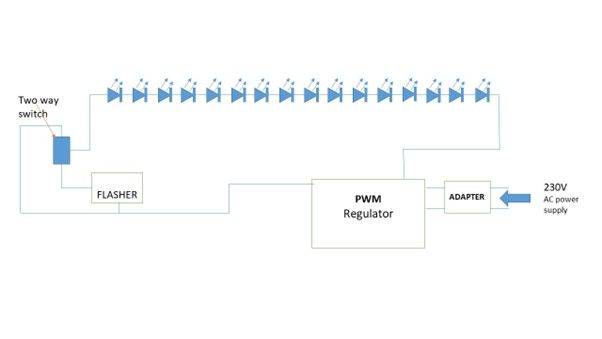 Figure 2) Ray diagram showing Infra-red gastric bougie device preparation
WORKING PRINCIPLE OF THE DEVICE
Most of the biological soft tissues have relatively low light absorption property in the visible and NIR spectral regions (600 nm-1300 nm) and is known as a “tissue optical window” or “therapeutic window”6. The fact that the visible light is greatly scattered and absorbed within the depth of just a few hundred microns, this makes near infra-red radiation a good spectral region for performing non-destructive measurements on thick or bulky biological tissue6. The Figure 3 shows absorption co-efficient of various biological tissues at different wavelength spectrum. In our study, 850 nm wavelength emitting LEDs were specifically used as the present-day laparoscopic cameras are designed to capture this wavelength (800- 850 nm) because the cameras are designed to capture the ICG (Indo Cyanin Green) dye at 830 nm. In a dilute aqueous solution, ICG dye has an absorption peak of 780 nm wavelength and an emission peak of 830 nm wavelength7. The normal gastric wall thickness ranges from 2-7 mm in the body and pyloric regions of the stomach respectively8. 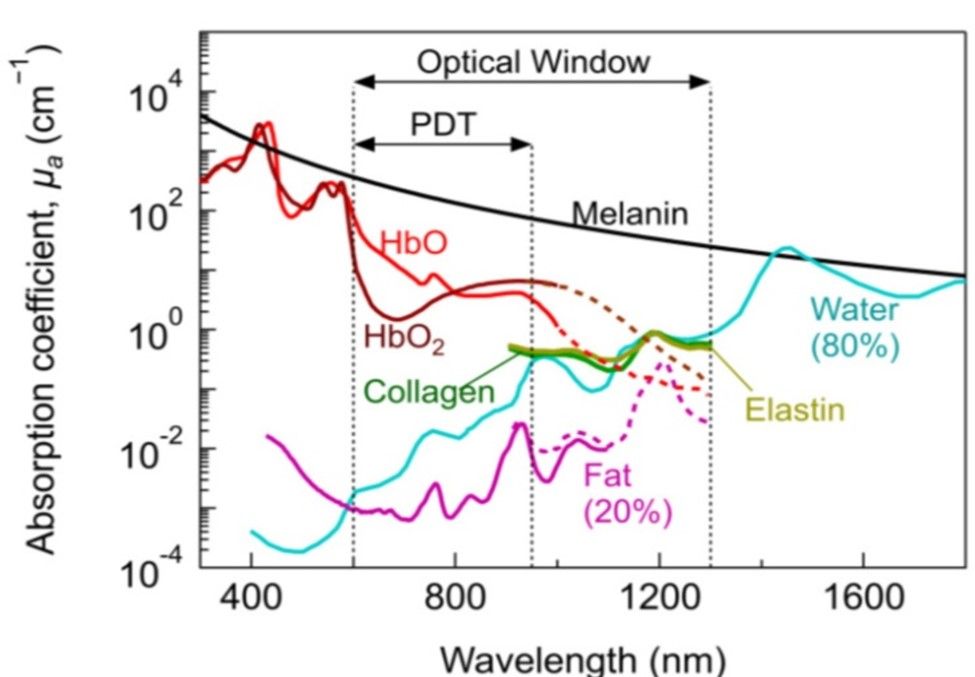 Figure 3) - Absorption co-efficient of various biological tissues at different wavelength spectrum.
Courtesy @ Algorri JF et al9.
The infra-red light emitted from the diode placed in the gastric bougie penetrates the stomach wall and is captured by the Charged Coupled Device (CCD) attached to the telescope and then visualised on a monitor as a pink fluorescent lit tube with in the stomach lumen and thus acting as a template during various bariatric procedures.
SURGICAL TECHNIQUE
The patient was subjected to general anaesthesia and pneumoperitoneum of 15 mmHg was created. Abdomen was then accessed with 10 mm umbilical port and diagnostic laparoscopy was done. Gastroepiploic gastric branches were then divided starting at 2 cm proximal to the pylorus until the angle of His, dividing the short gastric and posterior fundic vessels after exposing greater curvature10. Infra-red gastric bougie was introduced by the anaesthesiologist into the stomach and the surgeon manipulated the stomach and thus guided the tube into it. The difference in the visualization of the stomach with and without infrared light was noted (Fig 2A & Fig 2B). The gastrectomy was performed over this tube, a maneuver that calibrates the width of the remaining stomach during the resection11. Similarly, its role in gastric plication and in assessing proper closure of the hiatus hernia makes it an important tool during these surgical procedures. 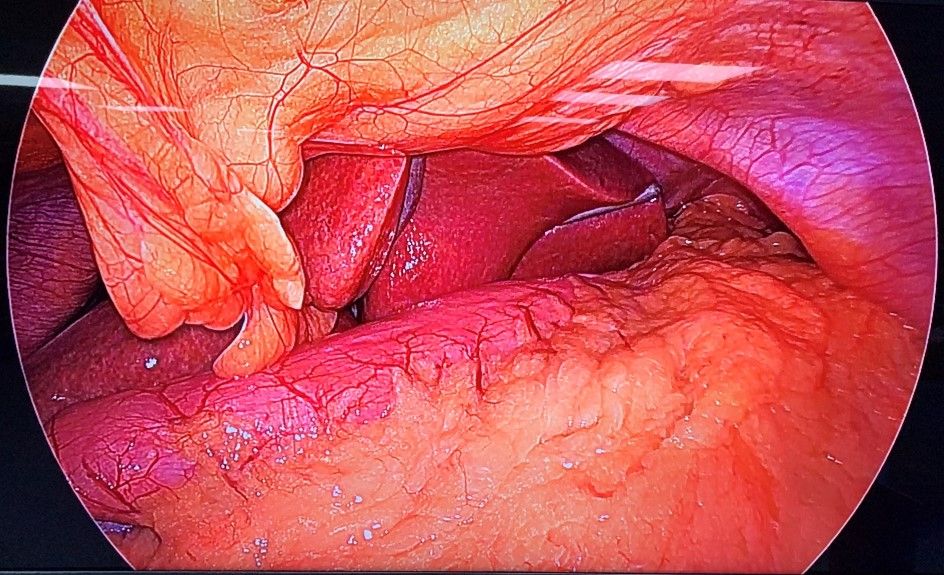 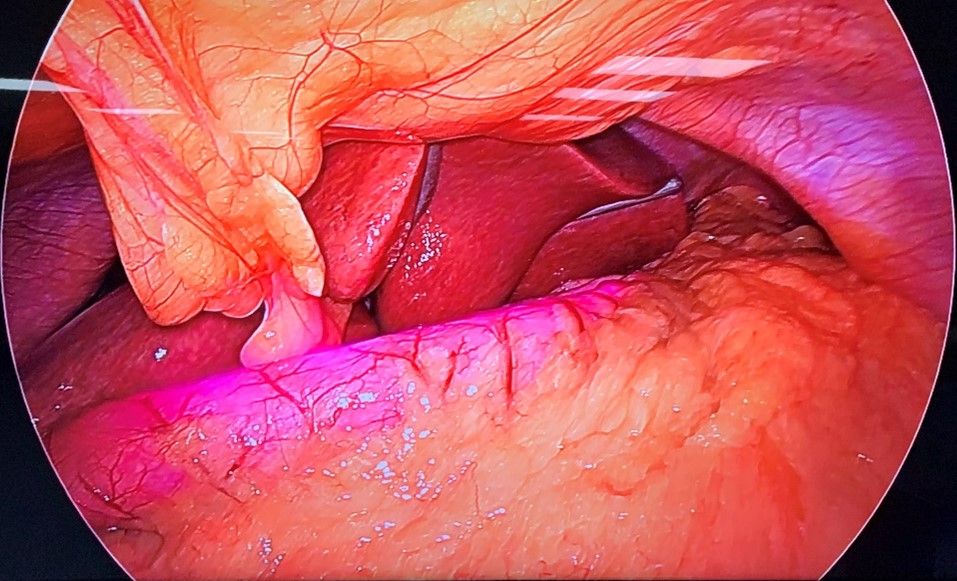