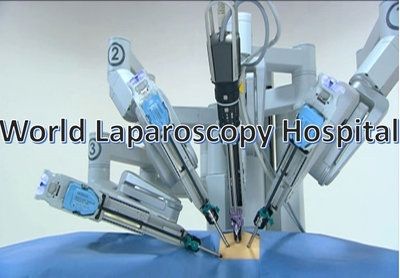 The quest for improved patient outcomes has been a driving force for adoption of novel surgical innovations across surgical subspecialties. Gynecologic oncology is one such surgical discipline in which minimally invasive surgery has a robust and evolving role in defining standards of care. Robotic assisted surgery has developed during the past two decades as a more technological advanced form of minimally invasive surgery in an effort to mitigate the limitations of conventional laparoscopy and improved patient outcomes. Patients treated with these techniques have lesser intra-operative blood loss, reduced post- operative pain and shorter hospital stays. Due to the radicality of gynae-oncologic procedures, there has been a limited use of laparoscopy in gynecologic oncology. Traditional laparoscopy relies on hand movements that are counterintuitive and instruments with a limited range of motion that are often ergonomically strenuous. Traditional laparoscopy can also be difficult due to limited operative field visualization and the reliance of skilled surgical assistant. Such factors can lead to significant fatigue and challenges for the primary surgeon. Robotic-assisted surgical platform may overcome many of the shortcomings of laparoscopy while preserving the patient benefits. It has many other advantages over laparoscopy, including enhanced visualization, improved dexterity and surgeon comfort.

Da Vinci Surgical System is the only commercially available and FDA-approved robot for performing gynecologic oncology procedures. It was first introduced in 1999 and received FDA approval in 2005. It is comprised of three components: the patient side surgical cart, the vision system, and the surgeon’s console. The surgical cart is composed of four arms for controlling 12mm 3D camera and two to three surgical instruments. The imaging is better as it reconstructs a 3D stereoscopic immersive view of the surgical field in comparison to a collapsed 2D optics of laparoscopy. The robotic instruments are wristed, thereby providing a seven-degree flexibility compared with a four-degree flexibility of laparoscopy. The surgeon’s wristed movements are translated in real-time to the robotic instrument placed within the patient and are scaled to reduce tremor and enhance precision. The surgical console has foot-controlled clutches for camera movement, master position, and energy source activation. The primary surgeon works autonomously at the console, remote from the patient, while the surgical assistant remains scrubbed at the patient’s side to assist with retraction, suction, irrigation, and instrumentation.

The Cochrane Library, Pub Med and Medline were used to search for articles from 2006 to 2016. The database was searched using the relevant terms including all subheadings. Search terms used were: ‘Robotic surgery’, ‘Gynecology oncology’, ‘Cervical Cancer’, ‘Endometrial cancer’, ‘Ovarian Cancer’ , ‘Minimal access techniques’. The articles chosen were of recent publication and in English.

Obesity is a risk factor for endometrial cancer and it is this group of women who would benefit most from robotic surgery. This group of patients have a higher risk of intra-operative and post-operative complications, such as bleeding, wound dehiscence, wound infection and pulmonary embolism. Post-operative complications were significantly higher in patients who underwent laparotomy compared to robotic assisted staging. Many feel that the advantages of a robot will help overcome some of the barriers of operating on the morbidly obese cohort. [4]

Many have described the learning curve as being faster for robotic-assisted staging than laparoscopic staging. Even with laparoscopic facilities being widely available, robotic assisted surgery has allowed more women to have access to minimally invasive surgery for endometrial cancer.

Traditional laparoscopy has not been widely accepted for this type of cancer due to its complexity. However robotic-assisted radical hysterectomy has been gaining popularity. Retrospective studies to date have shown that minimally invasive radical hysterectomy is not inferior to traditional open radical hysterectomy. It was associated with less blood loss, fewer operative complications, higher lymph node yields and a shorter length of hospital stay. No significant difference in operative time and length of the excised parametrial tissue. Post-operative complications are also fewer, such as lymphocysts, lymphoceles, wound infections and ileus. [5]

Compared to traditional laparoscopic radical hysterectomy, the robotic approach is associated with shorter operative times, lesser blood loss and shorter lengths of hospital stay. Rates of conversion to laparotomy and rates of operative complications appear similar between robotic and laparoscopic approaches. However, the data should be interpreted with caution as all studies are retrospective and comparisons often reflect sequential time comparisons or single surgeon experience. [5]
In a recent study, the mean operating time is shortest with laparotomy but robotic surgery had briefest length of stay and the least blood loss. Robotic radical hysterectomy has been shown to be feasible and might be favorable over conventional laparotomy in patients with early cervical cancer. [6] 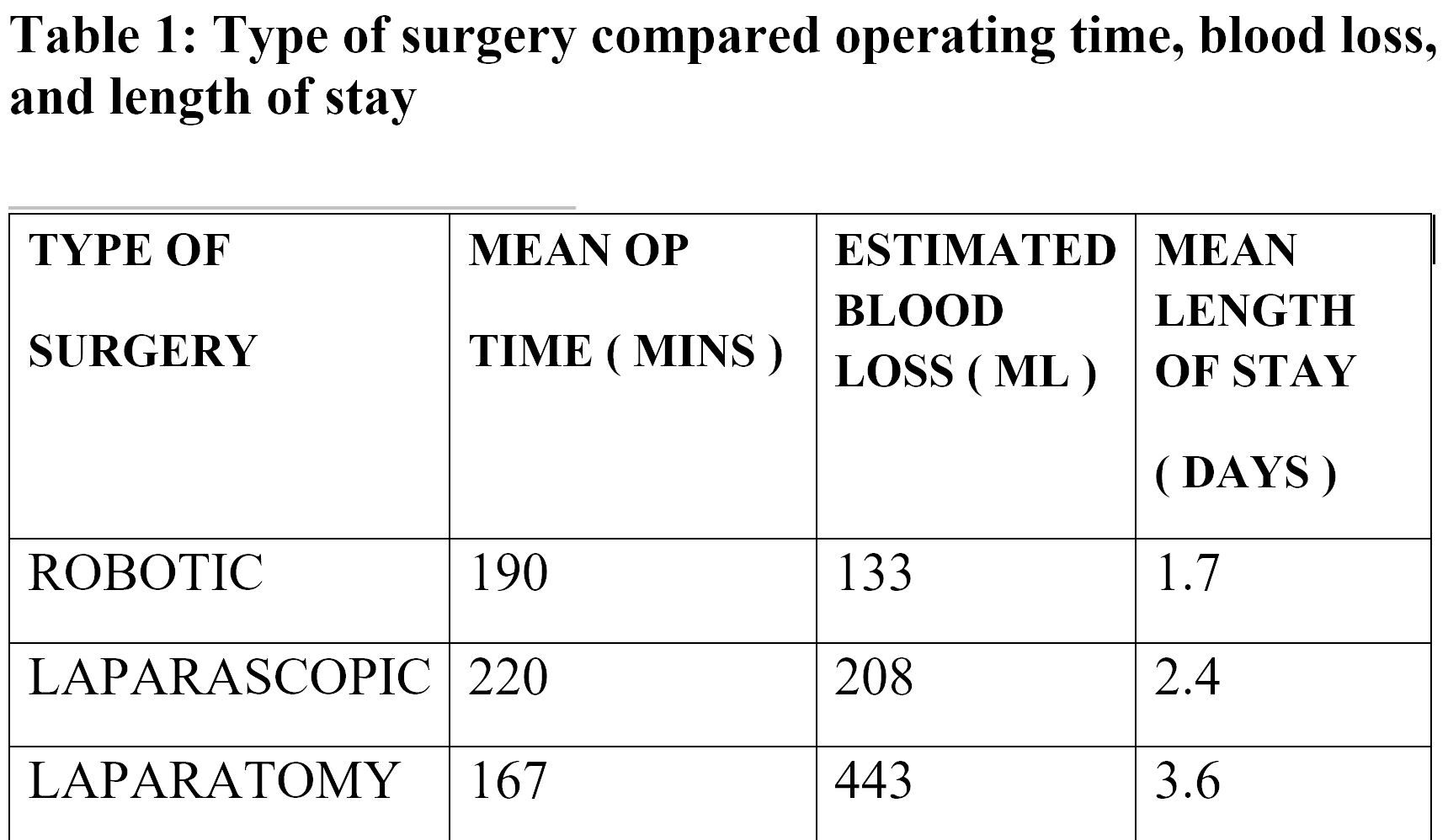 Complex gynecological oncology procedures, like radical trachelectomy and transperitoneal para-aortic lymphadenectomy, can be accomplished with the robot with similar operative times and lymph-nodal count. The main advantage is the reduced blood loss and shorter hospital stay without compromising histopathological outcomes.

It is important to note that robotic assisted surgery is unlikely to replace laparotomy for primary debulking surgery with ovarian cancer. Nevertheless, it still has a role in early stage ovarian cancer or small volume disease and fertility sparing surgery. Limited studies have been published regarding its feasibility in ovarian cancer.

Most of the gynecologic oncology procedures are complex and radical. It has a steep learning curve with potentially significant intra-operative and post-operative morbidity. Laparotomy has traditionally been the gold standard in treating endometrial, cervical and ovarian cancer. However, the paradigm is shifting, especially with the introduction of robotic-assisted surgery. Many gynecologic oncologists have embraced the robot as it has a faster learning curve compared to laparoscopy, is more ergonomically friendly to the surgeon, and allows for more complex operative dissection with advantages to the patient.

Robotic-assisted surgery has proven that minimal access surgery confers so many benefits to the patients in terms of reduced postoperative complications, for instance less wound infections and ileus, shorter hospital stay, lesser postoperative pain, lesser analgesia requirement, quicker return to work and significant improvement in quality of life. Multiple studies have proven this true for robotic assisted surgery too. Some studies have even shown patients undergoing robotic assisted surgery to have a shorter length of stay in comparison to laparoscopy. Patients can be discharged home within 48 hours, allowing for more operative cases and shorter waiting times.

Cost analysis is an important and difficult task when evaluating any new technology. When establishing a robotics program, there is clearly a significant fixed cost associated with the purchase of a robotic surgical system. The first cost includes purchase price of the robotic system, which ranges between two to three million dollars and requires a 10% annual maintenance fee for repair and servicing as well as software updates. The second cost is the procedural cost, which includes the disposable robotic instruments ($200/use), drapes to maintain sterility of the system, and a few other accessories and ports required to perform the surgery that are specific to robotics. The third cost is the cost of training new personnel and initial delays in setup time and procedure time during learning curve. The fourth cost is the expense of training and/or proctoring the surgeon until he/she is certified. Becoming cost conscious about the way in which we deliver care is increasingly important. A major criticism of robotic-assisted surgery is its expensiveness over traditional laparoscopy. However, in the long term, it costs less than laparotomy cases. One study calculated costs in two separate methods, including societal and hospital perspective methods.

TRAINING OF REGISTRARS AND FELLOWS

In a recent survey of gynecologic oncology training programs, 80 percent of fellows in training reported a need for more minimally invasive surgical training. As new surgical techniques and instrumentation are brought to the forefront, efficient training of registrars and fellows is imperative. A recent systematic review evaluated the effectiveness of virtual reality training for laparoscopic surgery and concluded that the virtual reality training resulted in less operating time, error, and unnecessary movements in comparison to standard laparoscopic training. The benefit of robotic surgery platform is that it takes a two-trainee case (laparoscopic   hysterectomy) and turns it into a one-trainee procedure (robotic-assisted). The learning curve with robotic surgery is less steep and much easier to master.[11]

Robotic-assisted surgery offers distinct advantages over open surgery in the management of patients with gynecologic cancer. Current evidence supports equivalence of robotic and laparoscopy in many perioperative outcome measures. The cost of robotic technology remains a potential barrier to widespread acceptance of robotic surgery; however overall cost advantages of robotic surgery over open surgery have been documented and the cost of may further decrease with increasing utilization. Fellowship programmes should include standardized training in both robotic surgery and traditional laparoscopic surgery.