congenital anomalies of the reproductive tract are common which alters the outcome and are seen in approximately 3-5% of the general population and approximately 3% of infertile women. [1] These are usually asymptomatic, [2] but are sometimes associated with recurrent pregnancy loss or infertility. [3] ,[4] Among these anomalies, septate uterus (class V, American Fertility classification, based on the study by Buttram and Gibbons [5] ,[6] ), is the most common anomaly to be associated with obstetric complications and infertility. Mullerian anomalies account for 15-25% of spontaneous abortions. [7] Resection of the septum helps to improve pregnancy outcome in these women.A recent study performed by pace s etal demonstrated an improvement in uterine perfusion following hysteroscopic metroplasty based upon uterine artery velocimetry indices

In the era before the advent of hysteroscopy the correction of such defects required laparotomy, which involved long tedious surgeries. However, now with the development of new techniques, hysteroscopic resection of the septum has become the primary modality of treatment with advantages of shorter operative time, short hospitalization stay, and decreased incidence of complications. There is enough evidence in the literature to support the fact that removal of septum improves pregnancy rates in women with bad obstetric history. [8] ,[9] However, its role in patients with otherwise unexplained infertility is still not clear due to the paucity of enough evidence. A few retrospective small studies have reported increased pregnancy rates in women after septal resection Hysteroscopic metroplasty may be performed using versapoint bipolar,needle device ; a resecATtoscopic knife electrode with cutting current as well as Nd ;Yag laser. Yang etal [2006] revealed use of laser in hysteroscopic septal resection main advantage of a less cervical dilation,reducing chances of uterine perforation.reduced risk of bleeding so increases effectivity of procedure

This prospective observational study was designed to assess the reproductive performance, after hysteroscopic metroplasty, in patients with septate uterus and primary infertility.

Uterus is formed from two mullerian ducts.The caudal two thirds of these ducts form the uterus whereas upper third gives rise to fallopian tubes .Failure or arrest of development during any of three stages will lead to uterine malformation
AT 14-18 WEEKS
Normally resorption of medial septum initially separating the caudal parts of the mullerian ducts to form uterovaginal channel
Failure of resorption of the midline septum leads to septate uterus .Normally septate uterus is never combined with other anomaly of genitourinary tract. Septate uterus can be complete septate.;partially septate; or simple fundic spurls

Study patients were recruited from the population of infertile women between the ages of 18 and 35 years, who attended our infertility clinic. Women over 35 years of age were excluded from the study, to eliminate any age-related factors impairing conception. All women underwent a detailed workup to exclude any known cause of infertility. In addition to a detailed history and thorough clinical examination workup for sexually transmitted diseases (STD), hormonal profile, assessment of ovulation, and semen analysis was performed. Any women with any abnormality in these tests were excluded from the study. The preliminary diagnosis of septate uterus was made on a hysterosalpingogram (HSG), after which hysterolaparoscopy was planned for these women. All women were counseled thoroughly, and a written informed consent was taken before surgery. The surgery was performed under general anesthesia. The women with pelvic lesions seen on laparoscopy were excluded from the study. This was followed by the hysteroscopic resection of the septum. [Figure 1] below shows the original findings at hysteroscopy Surgery

In the initial years of the study metroplasty was performed with 26-French resectoscope fitted with a cutting knife electrode with 0 degree endoscope. Subsequently with the introduction of Versapoint, metroplasty was performed using bipolar Versapoint with saline as the distension media. Cutting current was 60-90W. Uterine cavity was distended with fluid and a record of inflow and outflow fluid was kept.[Figure 2] below shows the septum being cut using Versapoint. The septum was divided in an upward direction till both tubal ostia were visualised. [Figure 3] shows the uterine cavity after septal resection. Hemostasis was ensured at the end of the procedure and any bleeding points were electrodessicated 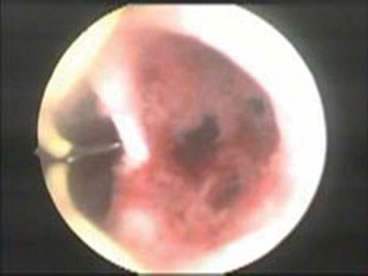 The patients were put on cyclical hormonal therapy (estradiol valerate and medroxyprogesterone acetate). A second-look hysteroscopy was scheduled after two months to assess the surgical outcome.

All 80 women underwent second-look hysteroscopy after two to three months of primary surgery [Figure 2]. A hysteroscopic examination revealed an entirely normal cavity in 15 (21%) women [Figure 3]. Another 40 women (55%) had a small fundal notch (less than one centimeter). A repeat procedure was carried out in 17 (24%) women, wherein the hysteroscopy revealed a septal remnant more than one centimeter.

These women were then subsequently followed up for a period of 12 months and were counseled to have unprotected sexual intercourse for this period. Eight women were lost to follow up. Of the remaining 64 women 33 women conceived naturally, within 12 months of metroplasty. There was only one twin pregnancy, the rest were all singletons.

Four women had spontaneous first trimester abortions. Ultrasonographic examination between 14 and18 weeks of gestation revealed cervical shortening and funneling in seven women. McDonald's cervical encirclage was performed for these women with cervical incompetence. Five women delivered preterm. Of these, two women had undergone cervical encirclage and the other three were without circlage. The reproductive performance after metroplasty in these women is summarized in [Table 1].

Septate uterus is the most common uterine anomaly to be associated with poor reproductive performance. The exact mechanism by which this anomaly causes recurrent abortions or infertility is not clearly established. Also controversial is the matter of whether a septate uterus actually causes infertility?

Diminished size of the uterine cavity and cervical incompetence, associated with septate uterus, may be the factors involved in causing a poor reproductive outcome. [13] ,[14] Ultrastructural alterations in the septal wall compared to the lateral uterine wall could be the cause of infertility in women with septate uterus. Fedele et al. , reported that the septal wall consists of fibroelastic tissue with alterations in the endometrial - myometrial blood vessels, which cause a negative impact on placental development. [15]

Metroplasty is an accepted method of treatment in women with recurrent abortions and septate uterus and it significantly improves the subsequent reproductive outcome. Homer et al. , in a review on septate uterus, combined data from several published series and reported that the incidence of spontaneous abortion and preterm delivery rate decreases significantly after metroplasty, whereas, the incidence of term delivery rate increases. [16]

However, as far as infertility is concerned, there is still a huge difference of outlook as to whether infertility is an appropriate indication for metroplasty or not. Some investigators recommend surgery while some others do not. [17] ,[18] ,[19] There is scarcity of randomized data. In a study conducted by Pabuccu et al. , 41% spontaneous pregnancy rates were found after metroplasty, in women with primary unexplained infertility except septate uterus. [20] Of late, in a prospective controlled trial by Mollo et al. , it was observed that hysteroscopic resection of the septum improved fecundity rates in women with septate uterus and otherwise unexplained infertility. [21] These findings were observed once more in the current study. Thirty-three out of 64 (51.5%) women conceived naturally within a year of surgery and the incidence of spontaneous abortions was very low (12%).