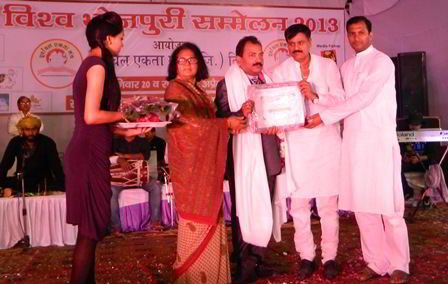 Dr R K Mishra has received the Purvanchal Gaurav award by Purvanchal Ekta Manch, New Delhi on 21st of April 2013. This award is given to Indian for his/her excellent career and outstanding service for the people of Purvanchal. Given once in a year the Purvanchal Ekta Manch is searching the individual who has given distinguished and highest service in any field. Purvanchal (Hindi: पूर्वांचल , Urdu: پُورواںچل) is a geographic region of north-central India, which comprises the eastern end of Uttar Pradesh state, Bihar, and some portion of Madhya Pradesh. It is bounded by Nepal to the north, Indian state Bihar to the east, Bagelkhand region of Madhya Pradesh state to the south, the Awadh region of Uttar Pradesh to the west and the end of Doab (at Allahabad) in Uttar Pradesh to its southwest. There is a political demand to create a separate state. Purvanchal area is represented by 23 Members of Parliament to the Lok Sabha and 117 legislators in the 403 member Uttar Pradesh state assembly or Vidhan Sabha. Purvanchal Ekta Manch is the biggest Cultural and social platform of purvanchal. 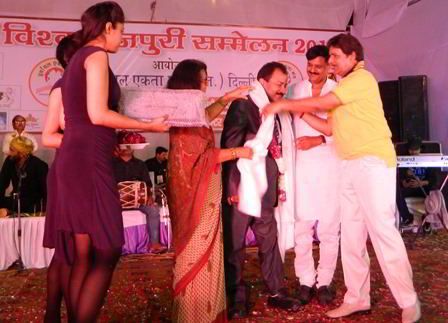 Purvanchal Gaurav Award is given to the person who does outstanding work for the underprivileged section of society and who has demonstrated extraordinary efforts in promoting the needs of the India. Purvanchal consists chiefly of three divisions-the eastern-Awadhi region in the western world, the western-Bhojpuri region in the east the Baghelkhand region from the south as well as the Nepal region in the north. It lies on the Indo-Gangetic plain, and together with western Bihar is regarded as the densely populated area in the world. The rich quality of soil and the high earthworm density from the soil than adjoining districts of Uttar Pradesh is favorable for agriculture. The majority of the countryside emerges to intensive agriculture. Bhojpuri is the predominant language or dialect in the area in addition to Hindi although Awadhi and Baghelkhandi can also be spoken in the western and southern areas. Like Bihar state towards the east, a big population, slow economic growth, agricultural mechanisation, and the closure of sugar mills have generated increased unemployment, social and political discontent, and a few unrest in your community. 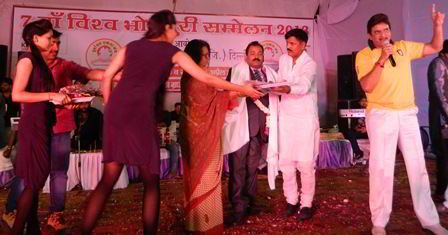 Purvanchal Gaurav Award honors individuals for a particular accomplishment and is given only once in a year by Purvanchal Ekta Manch which is the biggest Cultural and social platform of purvanchal. According to Times of India, a total of 150 million people in India speak Bhojpuri. An estimated 70 million people in Uttar Pradesh and 80 million people in Bihar speak Bhojpuri as their first or second language. There are 6 million Bhojpuri speakers living outside of Bihar and Purvanchal. These areas include Nepal, especially Birgunj, Mauritius, Fiji, Suriname, Guyana, Uganda, Singapore, Trinidad & Tobago, Saint Vincent and the Grenadines, Great Britain, Canada and the United States. This makes the total Bhojpuri speaking population in the world close to 90 million. However, the official figures of the 2001 Indian Census are much lower, showing 33 million speakers of the Bhojpuri dialect under the Hindi language sub-family.

Historically Purvanchal could be the region ruled with the king of Kashi (Kashi Naresh), which reigons are Mirzapur, Ballia, Ghazipur, Sonbhadra, Deoria, Azamgarh, Jaunpur, some main aspects of Gorakhpur plus Sant Kabir Nagar. This territory was ruled through the Bhumihar Brahmin that have their strong Brahmin army. Australia of Kashi began by Khsetravridha, the son of Ayus, with the Somavansa dynasty of Pratishthana. It lost independence in 1194 and was eventually ceded through the Nawab of Oudh on the British Raj in 1775, who recognized Benares like a family dominion. Benares became a state in 1911]. It absolutely was due to the privilege of 13-gun salute. The governor of Benares gave almost all of the area currently referred to as Varanasi to Mansa Ram, a Gautam Bhumihar Brahmin zamindar of Utaria. In 1737 AD Balwant Singh, ruler of Utaria, later received the territories of Jaunpur, Varanasi and Chunar in 1740 AD from your Mughal Emperor of Delhi. Australia of Benaras entered by doing this beneath the Mughal dynasty. Other areas within the kingship of Kashi Naresh were Chandauli, Gyanpur, Chakia, Latifshah, Mirzapur, Nandeshwar, Mint House and Vindhyachal.

Bhojpuri and several closely related languages, including Maithili and Magadhi, are together known as the Bihari languages. They are part of the Eastern Zone group of Indo-Aryan languages which includes Bengali and Oriya. The scholar, polymath and polyglot Mahapandit Rahul Sankrityayan wrote some works in Bhojpuri. Other eminent writers include Viveki Rai. The number of Bhojpuri writers is small compared to the number of speakers. Some other notable Bhojpuri personalities are legendary freedom fighter Swami Sahajanand Saraswati, first president of India Rajendra Prasad, Manoj Bajpai, and former Indian prime minister Lal Bahadur Shastri, Chandra Shekhar. Bihar Kokila Padma Shri Sharda Sinha is a famous Bhojpuri folk singer.