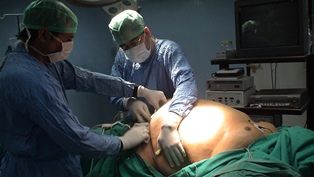 Port Site Wound infections in laparoscopy can be of two types:

Infections with atypical mycobacteria have been primarily reported after laparoscopic procedures. This is because, unlike open surgery, the instruments used for laparoscopic surgery have a layer of insulation that restricts the use of the autoclave in the sterilization process as the high temperatures involved destroy the insulation on them. The standard sterilization procedure has been a 20 minute exposure to 2.0 2.5% glutaraldehyde. At the current exposure time, these solutions act only as disinfectants and not sterilants thus allowing bacterial endospores to survive.

Also, when proper mechanical cleaning of the instruments is not done, blood and charred tissue deposits are left in the joints of the instruments during laparoscopic surgery. These Contaminated instruments deposit the endospores on to the subcutaneous tissue during the surgery which then germinate following which clinical symptoms appear after an incubation period of 3 to 4 weeks. 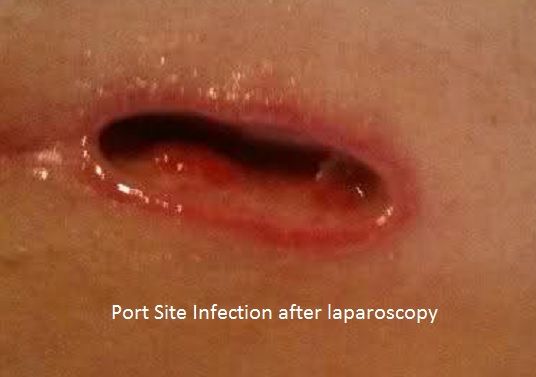 These microorganisms show limited response to first line anti-tuberculosis drugs. the standard treatment consist of combinations of second line anti-tubercular drugs including macrolides such as clarithromycin, quinolones like ciprofloxacin, tetracyclines like doxycycline, and aminoglycosides like amikacin.

The standard treatment starts after manifestation of clinical symptoms which consists of a 28 day regimen of oral clarithromycin and ciprofloxacin or amikacin. However, local administration of aminoglycosides has been shown to be highly efficacious in the treatment of particularly stubborn nodules and sinuses that persist after completion of oral therapy

Port Site Wound infection in laparoscopy is a problem faced by laparoscopic surgeons in developing countries which is preventable through proper sterilization of instruments and early clinical diagnosis and treatment.