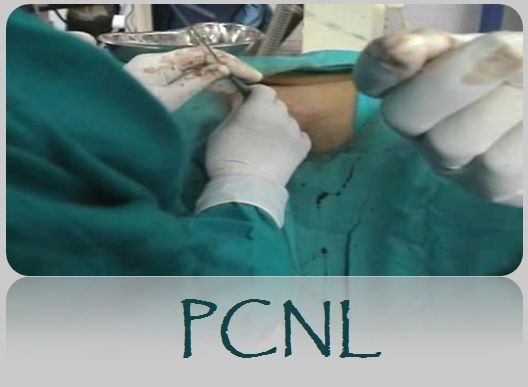 Percutaneous nephrolithotomy (PCNL) is a surgical procedure to remove stones from the kidney by a small puncture wound (up to about 1 cm) through the skin. It is most suitable to remove stones of more than 2 cm in size and which are present near the Pelvic region. It is usually done under general anesthesia or spinal anesthesia.

A Retrograde pyelogram is done to locate the stone in the kidney. With a small 1 centimeter incision in the loin, the Percutaneous nephrolithotomy (PCN) needle is passed into the pelvis of the kidney. The position of the needle is confirmed by fluoroscopy. A guide wire is passed through the needle into the pelvis. The needle is then withdrawn with the guide wire still inside the pelvis. Over the guide wire the dilators are passed and a working sheath is introduced. A nephroscope is then passed inside and small stones taken out. In case the stone is big it may first have to be crushed using ultrasound probes and then the stone fragments removed.

The most difficult portion of the procedure is creating the tract between the kidney and the flank skin. Most of the time this is achieved by advancing a needle from the flank skin into the kidney, known as the 'antegrade' technique. A 'retrograde' technique has recently been updated wherein a thin wire is passed from inside the kidney to outside the flank with the aid of a flexible ureteroscope. This technique may reduce radiation exposure for patient and surgeon.

The following complications may take place:

Percutaneous nephrolithotomy has acceptably low morbidity. Patient comorbidities and stone burden are the most important predictors for PNL complications.The AUA Report on the Management of Staghorn Calculi estimates transfusion rates (95% CI) of 18% (14-24%). In a broad group of patients submitted to PNL, transfusion rate is as low as 5.5%Overall significant complications associated with PNL, including acute loss of kidney, colon injury, hydrothorax, perforation, pneumothorax, prolonged leak, sepsis, ureteral stone, and vascular injury, has an estimated rate (95% CI) of 15% (7-27%). Perforation of the collecting system (7.2%) with subsequent urine extravasation caused by a guide wire with straight and hard tip can be avoided by using a J guide wire with a soft and curved tip. Sepsis (0.3-4.7%) is a feared complication. Some investigators suggest administration of oral ciprofloxacin for 1 week before PCNL in patients with stones of ≤20 mm or dilated pelvicalyceal systems to reduce the risk of urosepsis. Colonic perforation (0.2-0.8%) is rare.

Risk factors are left-side procedure, horseshoe kidney, inflated colon, a thin patient, and previous bowel surgery. In case of extraperitoneal perforation, the gastrointestinal tract must keep separated from urinary tract by placing a catheter into the colon and maintaining antibiotics during conservative treatment. On the other hand, an intraperitoneal perforation demands immediate open surgery. Overall risk of pleural injury (0.0-3.1%) is very low, but increases to about 10% if the puncture is above the 12th rib. As such, this puncture should be performed in expiration. PNL mortality risk is up to 0.3%. The long-term complications reported for PNL include loss of function, perinephric collection, recurrent urinary tract infection, stricturing of the collecting system, urethral stricture, and stone recurrence. 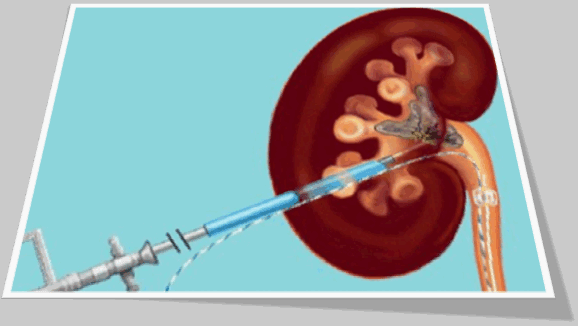 One advantage of this surgery is that it is the most effective technique for making sure a patient is stone-free. Most patients leave the hospital stone free. Occasionally, though, another procedure will be needed to remove a stone. Even though it involves an incision, it is less invasive than a full open surgery to treat the kidney stone. Because it is among the more difficult surgeries, it is performed by surgeons with specialized training. Urologists and radiologists may work together on these surgeries.

Percutaneous nephrolithotomy is usually performed with the patient in prone position through a posterior calyx. This technique is well established, with high rates of success and accepted morbidity. Since 1998 when Valdivia-Uria described the lateral access with the patient in supine position, few groups have used this approach for PNL. The potential advantages of the supine position over the prone position include ease of patient positioning, ability to perform simultaneous PNL and ureteroscopic procedures, better control of the airways, dependent Amplatz sheath drainage facilitating the evacuation of stone fragments. Despite the potential advantages of the supine position, it is not widespread trough the urologic community, perhaps due to the lack of experience and afraid of colonic injuries.

Percutaneous nephrolithotomy technique is in constant evolution. Supine position has been proved as an acceptable option. Urologists must be trained to gain their own renal tract access. The miniperc PNL still needs equipments improvements for better results. Tubeless PNL is increasing in popularity and different tract sealants have been studied. Medical prevention is proved to be effective against stone recurrence and should be always used after PNL. Although the evolution of the technique in the last 20 years, urologists must continue to improve their skills and develop new technologies to offer to the patients more and more a safe and effective option to treat large renal stones. Percutaneous nephrolithotomy is a very safe procedure, but there are some risks and complications that can arise, as with any surgical treatment.