Abstract: In this review article, seven articles were reviewed from1998-march 2007 and analyzed, each study had 100-150 patients, reviewing treatment and management of adrenal surgery especially pheochromacytoma. The studies were taken from Journal of Clinical Endocrinology and Metabolism, Annals of Surgical Oncology, Google, Springerlink, to evaluate the safety of laparoscopic adrenalectomy in comparison open treatment. Conclusion: Laparoscopic adrenalectomy should be the treatment of choice for all benign adrenal tumors. Laparoscopic resection of large adrenal tumors needs experienced surgeons in open and advanced laparoscopic surgery. 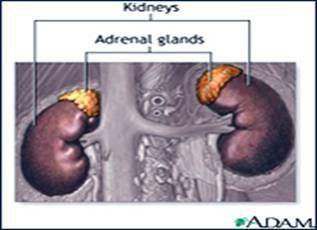 The diagnosis of pheochromocytoma is made upon biochemical and radiological studies. That is US MRI CT-scan. norcholesterol (NP-59) or 131I- metaiodobenzylguanidine(MIBG), The first laparoscopic adrenalectomy was performed by Michel Gagner in 1992 [24].

Objective: The aims of this study is evaluating the efficacy, safety and outcome of laparoscopic adrenalectomy for pheochromocytoma in comparison with open surgery, and also determine the risk factors which influence the outcome to identify those patients that are not good candidates for laparoscopic approach.

Treatment: Surgical treatment is the only option. Preoperatively in all patients with preoperative signs and symptoms of catecholamine excess, alpha-adrenergic blockade was started 10 days to 2 weeks before surgery. For patients with tachycardia, beta-blockade was added. Patients with alpha blockade-induced orthostatic hypotension were treated with oral and/or intravenous volume loading during the 24 to 48 hours prior to surgery. Patients were infused with 1 to 2 L of crystalloid solution for intravascular volume expansion in the preoperative holding area. It is wise to have all patients an arterial line and 2 large-bore peripheral intravenous lines or a central venous line placed prior to the induction of general anesthesia. 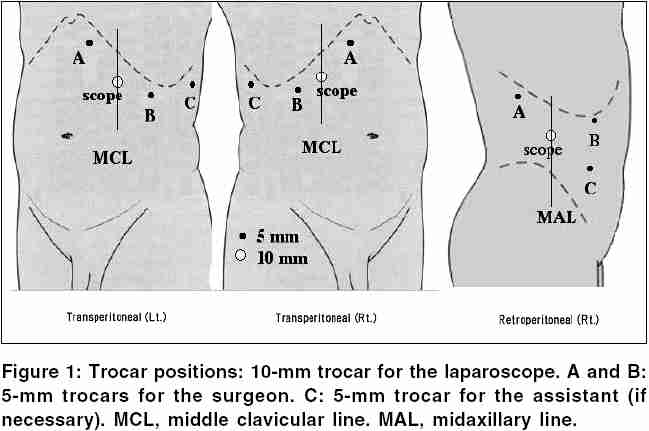 The adrenalectomies can be performed laparoscopically through a lateral decubitus or supine transperitoneal approach, or lateral retroperitoneal approach [1-2] .Briefly, a diagnostic laparoscopy was performed at the beginning of each procedure to rule out local tumor invasion or diffuse metastatic spread.The lateral decubitus transperitoneal approach; which is the most popular; starts with three subcostal ports (5–12 mm) allowed for the introduction of a 30° laparoscope and 2 working instruments. During right adrenalectomies, a fourth 5-mm port was placed in a subxyphoid position for liver retraction. Occasionally during left adrenalectomies, a fourth port was added below the tip of the left twelfth rib to provide blunt retraction of the kidney and/or adrenal gland. This technique was particularly useful for larger tumors, which often encroached upon the vascular hilum of the kidney, making exposure of the adrenal vein difficult. Early ligation and division of the adrenal vein was carried out prior to gland manipulation and dissection when possible.

For right adrenalectomies, the right hepatic lobe was completely mobilized to provide adequate visualization and safe access to the vena cava and adrenal vein. The triangular ligament was incised to the level of the diaphragm. The retroperitoneum was then opened longitudinally along the medial aspect of the adrenal gland, and immediately adjacent to the lateral edge of the liver, until the vena cava was clearly identified.

Development of the plane between the inferior vena cava and the medial margin of the gland was performed to expose the right adrenal vein. Early dissection and mobilization of the inferior retroperitoneal attachments to the tumor increased gland mobility and made venous control considerably safer. 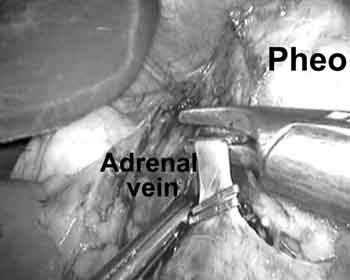 On the left, the splenic flexure was mobilized to allow access to the splenorenal ligament. The retroperitoneal plane superficial to Gerota fascia was developed to the level of the diaphragm, allowing for medial rotation of the spleen and the pancreatic tail. A complete medial rotation of adjacent structures was critical to provide adequate exposure of the adrenal gland and vein. Gerota fascia was incised medial to the superior pole of the kidney to provide access to the left adrenal vein and the adrenal gland. The vein was then ligated and divided at its confluence with the left renal vein.

On either side, the borders of the adrenal gland were first identified and then dissected away from the retroperitoneum, using periadrenal fat as a “handle.” The larger glands, especially those greater than 5 cm, were most often resected with periadrenal fat, exposing the psoas muscle from the renal hilum cephalad to the diaphragm. The gland was never grasped to avoid hemodynamic liability, troublesome bleeding, or tumor disruption. Large adrenal veins, typically those greater than 7 mm in width, were divided with an endovascular stapler. Specimens were placed into an impervious extraction bag prior to morcellation (if necessary) and removal. The peritoneum and fascia at the trocar sites were closed endoscopically.

Postoperative Care: Crystalloid fluid challenge to treat Postoperative hypotension. NG –tubes as indicated. Clear liquids can be given on the same night after surgery.Patients were discharged 3-5 days. Follow-up in OPD at 7 to 10 days and another at 3 to 4 weeks postoperatively, and subsequently as needed. Long-term follow-up included frequent blood pressure monitoring for the first year, then yearly thereafter. Urinary metanephrine levels are followed annually for a period of 5 years.

Discussion: Surgical treatment offers the only cure for pheochromocytomas. Despite the improvements in perioperative medical management, anesthesia, and surgical techniques, adrenalectomy for pheochromocytomas carries morbidity rates as high as 40% and perioperative mortality rates of 2% to 4% [5]. Fears of cardiovascular instability due of excessive catecholamine release caused by the pneumoperitoneum and/or laparoscopic dissection have urged concerns over the role of laparoscopy in adrenalectomy. Continuous invasive monitoring and pharmacologic intervention by an experienced anesthesia team are necessary to avoid substantial cardiovascular instability. The surgeon must avoid excessive tumor manipulation, which can result in catecholamine release. Tumor manipulation has been shown to be the most important intraoperative factor for catecholamine release during both open and laparoscopic adrenal resections [6-7-8] .Fernandez-Cruz et al [9] demonstrated that mean plasma norepinephrine and epinephrine increased 13.7- and 34.2-fold during open tumor manipulation.

Thompson andassociates [25] performed a matched case-control study comparing50 patients having open adrenalectomy to 56 patients having adrenalectomy through a posterior approach. They found that LA, compared to OA, was significantly associated with shorter hospital stay, less postoperative narcotic use, more rapid return to normal activity, increased patient satisfaction, and less late morbidity. However, the laparoscopic procedure was associated, with longer operating room time and higher cost. Similar results have been reported by Prinz [26] and by Brunt et al [27] , who found that LA had distinct advantages compared to OA. Laparoscopic tumor manipulation was associated with a significantly diminished increase in plasma catecholamine levels (norepinephrine, 8.6-fold; epinephrine, 17.4-fold). Rocha et al [6] also reported that such hormonal release occurs despite an early adrenal vein ligation, likely due to the extensive vascularity of pheochromocytomas. Careful adrenal dissection, using periadrenal fat as a handle, with minimization of direct manipulation or compression of the gland itself, is critical to avoid catecholamine release. ntra-abdominal insufflation during laparoscopic pheochromocytoma excision may alone cause an increase in serum catecholamines.[6-10]

This stimulus may be via either a direct tumor compression or a change in tumor perfusion. The pneumoperitoneum with CO2 may lead to hypercapnia and acidosis, which, in turn, are known stimuli of catecholamine secretion and hypertension.[6-11] Rocha et al found a more than 10-fold elevation in catecholamines during abdominal insufflation to 12 mm Hg with CO2, with about 50% of patients experiencing hypertensive episodes.[6] As a result, helium has been suggested as an alternate insufflation agent to eliminate the deleterious effects of CO2 during laparoscopic adrenalectomies for pheochromocytoma. In a prospective evaluation of 11 patients undergoing helium insufflation during laparoscopic pheochromocytoma resection, the authors demonstrated that its use avoided significant intraoperative hypercarbia or acidosis and provided greater intraoperative hemodynamic stability [7]. Interestingly, though, there were no differences between the CO2 and the helium insufflation groups in either serum catecholamine surges or overall surgical outcomes. [7] When compared with other indications for adrenalectomy, laparoscopic resection of pheochromocytomas results in longer operative times, higher complication rates, and longer hospitalization. With growing experience using advanced laparoscopic techniques, conversion rates have decreased from 22% to 0%–4%.[12-13-14] The “learning curve” may play a significant role in improving the efficiency and safety of advanced laparoscopic procedures. Pheochromocytomas have a malignant potential and are frequently larger in size than other functional adrenal tumors. Extreme care must be exercised to avoid intraoperative capsular disruptions and possible iatrogenic pheochromocytomatosis. Li et al[15] reported 3 cases of pheochromocytoma recurrence 3 to 4 years after initial laparoscopic resection and possible tumor spillage. As a result, many investigators have suggested that laparoscopy be avoided for pheochromocytomas larger that 7 to 8 cm.[12-16-17] Conversion to an open procedure is warranted, however, when laparoscopic dissection cannot be performed safely or a complete resection cannot be performed without undue trauma to the gland.

It has been agreed by several authors that a posterior retroperitoneal LA is preferable to an anterior LA, especially inpatients who have either bilateral adrenal tumors, prior to extensive abdominal procedures with resultant adhesions and scar tissue formation, or pre-existing cardiopulmonary disease [18-19] Posterior LA is not indicated in patients with large adrenal tumors. The absolute contraindications for laparoscopic adrenalectomy include primary or metastatic invasive adrenal malignancies because extensive en bloc surgery and node dissection will be necessary. As well as coagulopathy, which can’t be controlled preoperatively. Size of the tumor correlates with malignant potential. Weight greater than 100 g or size equal to 6 cm is highly suggestive of malignancy [20-21] Laparoscopy is a limited approach to the adrenal, requiring manipulationof the gland to remove it. In patients with cancer,wide resection of the gland with contiguous structures provides the best chance for cure[22]. The lateral transperitoneal approach is preferred over the retroperitoneal approach because of improved working space and gland visualization [23]. The resected gland is removed from the port site in an occlusive bag to decrease peritoneal implantation and port site recurrence.

The question is not weather laparoscopic adrenalectomy for pheochromocytoma should be done or not, but by whom should it be performed. A surgeon who is very proficient laparoscopically and significantly knowledgeable about adrenal anatomy may be able to perform this operation in a hospital that offers an appropriate level of anesthesia and ICU care.

Conclusion: Laparoscopic resection of pheochromocytomas can be performed safely with a short hospital stay and few complications, minimally invasive adrenalectomy for large pheochromocytoma has historically been controversial. Lesions larger than 6 cm are associated with longer operative times than smaller lesions, but they are not associated with greater blood loss, higher rates of intraoperative hemodynamic instability, or longer hospital stay.