What is Morgagni Hernia?

Congenital diaphragmatic hernia (CDH) is a congenital malformation in the diaphragm. The most frequent form of CDH is really a Bochdalek hernia; other styles include Morgagni hernia, diaphragm eventration and central tendon defects in the diaphragm.

Malformation from the diaphragm allows the abdominal organs to push in the proper lung formation. Congenital diaphragmatic hernia is a life-threatening pathology in infants, plus a major reason behind death on account of two complications: pulmonary hypoplasia and pulmonary hypertension. Experts disagree about the relative significance about these two conditions, by incorporating focusing on hypoplasia, others on hypertension. Newborns with Congenital diaphragmatic hernia often have severe respiratory distress which can be life-threatening unless treated appropriately.

How the Morgagni Hernia Presents in Adult?

In adults Morgagni Hernia is generally asymptomatic and are found incidentally during laparoscopy or imaging for another condition is done. However, they may present as an emergency with abdominal pain due to strangulation of the hernia contents. In many adult morgagni hernia is reported as a strangulated Morgagni hernia, which presented with vomiting and abdominal pain due to a gastric volvulus in extreme cases.

What is Bochdalek hernia?

The Bochdalek hernia, also referred to as a postero-lateral diaphragmatic hernia, is regarded as the common indication of CDH, making up a lot more than 95% of cases.In this instance the diaphragm abnormality is characterized by an opening in the postero-lateral corner of the diaphragm which allows passage with the abdominal viscera in the chest cavity. Many Bochdalek hernias (80-85%) occur on the left side in the diaphragm, the great majority from the remaining cases occur around the right side, as well as a tiny proportion are bilateral, which is left- and right-sided defects. A good mnemonic is "Bochdalek is back also to the left".

What is Morgagni Hernia?

Morgagni Hernia is rare anterior defect of the diaphragm is variably called Morgagni, retrosternal, or parasternal hernia. Making up approximately 2% of most CDH cases, Morgagni Hernia can be seen as an herniation from the foramina of Morgagni which can be located immediately adjacent to the xiphoid technique of the sternum.Virtually all hernias occur on the right side of the body and are generally asymptomatic; However newborns may present with respiratory distress at birth just like Bochdalek hernia. Additionally, recurrent chest infections and gastrointestinal symptoms have already been reported in people that have previously undiagnosed Morgagni hernia. In asymptomatic individuals laparoscopic surgical repair is still recommended as is also prone to a strangulated intestine.

What is Diaphragm Eventration?

The diagnosis of congenital diaphragmatic eventration can be used when there is abnormal displacement or elevation of part or most of a normally intact diaphragm in the chest cavity. This rare type of CDH called Diaphragm eventration, occurs because about eventration the diaphragm is thinner, allowing the abdominal viscera to protrude upwards. This thinning of diaphragm is thought to take place because of incomplete muscularisation from the diaphragm, and could be found unilaterally or bilaterally. Minor types of diaphragm eventration are asymptomatic, in severe cases infants will show with respiratory distress much like Bochdalek hernia.

How the Congenital Diaphragmatic Hernia is diagnosed? 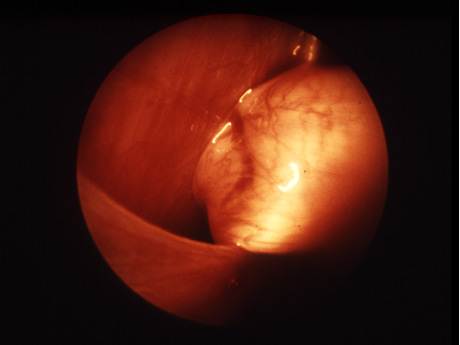 How the Laparoscopic Repair of Margogni Hernia is performed?

Laparoscopic repair of Morgagni hernias is a relatively simple and effective minimal access surgical method of repair in children with accentuated advantages. Morgagni hernias are anteromedial diaphragmatic defects that are typically simple to repair compare to other types. As opposed to posterolateral defects of diaphragm, which are very difficult to expose laparoscopically, the anterior defects can be easily seen with this approach of minimal access surgery.

Laparoscopic surgery is done via open or veress needle insertion of a 10 mm port at the umbilicus and subsequent insertion of two 5 mm ports. The stomach, transverse colon and omentum should be trapped in the hernia. They were reduced with difficulty after incising the neck of the sac and the edge of the diaphragmatic defect. In extreme There may be large section of necrotic omentum, which should resected and placed into a retrieval bag and subsequently removed. The transverse colon and stomach or bowel loops should be carefully examined and seen to be viable or not. The falciform ligament can be found sometime as part of the wall of the sac and this was reduced along with the sac and excised. The edges of the defect should be widely cleared of peritoneum and fat to expose the muscle and fascia of the diaphragm. The defect sometime may be found large and sometime may not suitable for primary closure. Polypropelene mesh should be used. The mesh should be big enough with approximately 2 to 3 cm of overlap over the edges of the defect of diaphragm to get a good hold over the diaphragmatic muscle and should be secured in place using 5 mm titanium tacks, called Protack. Sometime inturrupted extracorporeal square knot and intracorporeal tumble square knot can be used to fix the mesh.