Introduction: Morbid obesity is defined as a body mass index (BMI) greater than 40 kg/m2. The prevalence of morbid obesity in the U.S. is 6% for women and 2% for men; morbid obesity is associated with a shortened life span. For example, a morbidly obese man at age 20 can expect to live 13 years less than his counterpart with a normal BMI, which equates to a 22% reduction in life expectancy.

Materials and methods: A literature search was performed using search engine Google, HighWire Press, SpringerLink and library facility available at laparoscopic hospital. The following search terms was used: laparoscopic _ bariatric. Criteria for selection of papers were upon statistical way of analysis, institute if they were specialized for laparoscopy, the way of management and the technique of operations

1) Laparoscopic Vertical Banded Gastroplasty (VBG)- Described in 1994 by Hess .- Purely restrictive procedure with no Malabsorptive component .- Relatively simple operation with low operative risk. -Techniques: In this procedure the stomach is segmented along its vertical axis. To create a durable reinforced and rate-limiting stoma at the distal end of the pouch, a plug of stomach is removed and a propylene collar is placed through this hole and then stapled to itself. Because the normal flow of food is preserved,metabolic complications are rare 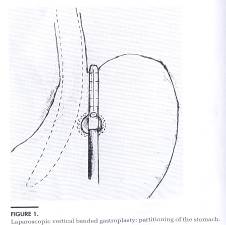 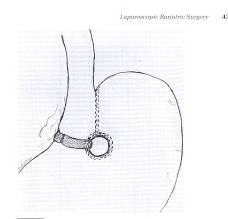 Adjustable Gastric Banding - It is the least invasive surgical treatment of Morbid obesity.- Described in 1993 by Catona .- It is purely restrictive procedure .- In Europe ,it is the bariatric procedure of choice.- In U.S.A. ,FDA approval since June 2001 .

-Techniques Adjustable gastric banding involves placing a gastric band around the exterior of the stomach. The band is attached to a reservoir that is implanted subcutaneously in the rectus sheath. Injecting the reservoir with saline alters the diameter of the gastric band; therefore, the rate limiting stoma in the stomach can be progressively narrowed to induce greater weight loss, or expanded if complications develop. Because the stomach is not entered, the surgery and any revisions, if necessary, are relatively simple 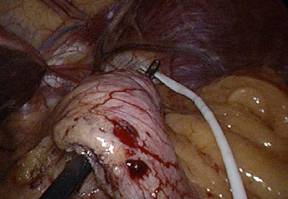 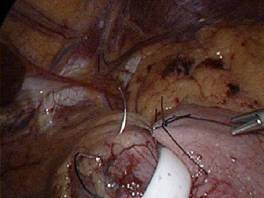 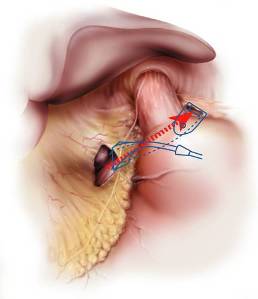 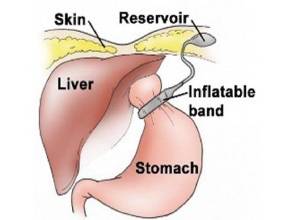 The biliopancreatic bypass (BPB) procedure, developed and used extensively in Italy, was designed to address some of the drawbacks of the original intestinal bypass procedures that have been abandoned due to unacceptable metabolic complications. Many of the complications were thought to be related to bacterial overgrowth and toxin production in the blind, bypassed segment. In contrast, BPB consists of a subtotal gastrectomy and diversion of the biliopancreatic juices into the distal ileum by a long Roux-en-Y procedure. The procedure consists of the following components:

The duodenal switch procedure is essentially a variant of the biliopancreatic bypass described above. However, instead of performing a distal gastrectomy, a "sleeve" gastrectomy is performed along the vertical axis of the stomach, preserving the pylorus and initial segment of the duodenum, which is then anastomosed to a segment of the ileum, similar to the above procedure, to create the alimentary limb. Preservation of the pyloric sphincter is intended to ameliorate the dumping syndrome and decrease the incidence of ulcers at the duodenoileal anastomosis by providing a more physiologic transfer of stomach contents to the duodenum. The sleeve gastrectomy decreases the volume of the stomach and also decreases the parietal cell mass. However, the basic principle of the procedure is similar to that of the biliopancreatic bypass; i.e., producing selective malabsorption by limiting the food digestion and absorption to a short common ileal segment.

Recently variations of gastric bypass procedures have been described, consisting primarily of long limb Roux-en-Y procedures, which vary in the length of the alimentary and common limbs. For example, the stomach may be divided with a long segment of the jejunum (instead of ileum) anastomosed to the proximal gastric stump, creating the alimentary limb. The remaining pancreaticobiliary limb, consisting of stomach remnant, duodenum, and length of proximal jejunum is then anastomosed to the ileum, creating a common limb of variable length in which the ingested food mixes with the pancreaticobiliary juices. While the long alimentary limb permits absorption of most nutrients, the short common limb primarily limits absorption of fats. The stomach may be bypassed in a variety of ways, either by resection or stapling along the horizontal or vertical axis. Unlike the traditional gastric bypass, which is essentially a gastric restrictive procedure, these very long limb Roux-en-Y gastric bypasses combine gastric restriction with some element of malabsorptive procedure, depending on the location of the anastomoses. . For gastric restrictive procedures, the weight loss is primarily due to reduced caloric intake, and thus the patient must be committed to eating small meals, reinforced by early satiety. For example, gastric restrictive surgery will not be successful in patients who consume high volumes of calorie rich liquids. In patients undergoing biliopancreatic bypass, reduced intake may not be as much of an issue, but patients must adhere to a balanced diet to avoid metabolic complications. In addition, the high potential for metabolic complications requires life-long follow-up. Surgeons need to be adequately trained in the particular techniques and should perform a high volume of these procedures. Laparoscopic Roux --En –Y Gastric Bypass (GBP )- Described in 1994 by Wittgrove.- It is a restrictive procedure with malabsorptive component .- It is the procedure of choice in superobese ,sweet eaters & in patients with GERD

The original gastric bypass surgeries were based on the observation that post-gastrectomy patients tended to lose weight. The current procedure, gastric bypass with horizontal or vertical partition of the stomach in association with a Roux-en-Y procedure (i.e., a gastrojejunal anastomosis). Thus the flow of food bypasses the duodenum and proximal small bowel. The procedure may also be associated with an unpleasant "dumping syndrome," in which a large osmotic load delivered directly to the jejunum from the stomach produces abdominal pain and/or vomiting. The dumping syndrome may further reduce intake, particularly in "sweets eaters. Because the normal flow of food is disrupted, there are more metabolic complications compared to other gastric restrictive procedures, all of which can be corrected by oral supplementation. Another concern is the ability to evaluate the "blind" bypassed portion of the stomach. Gastric bypass may be performed with either an open or laparoscopic technique. 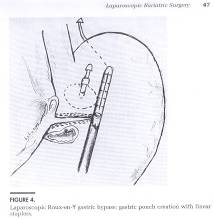 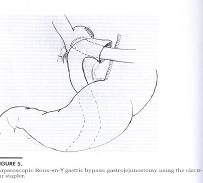 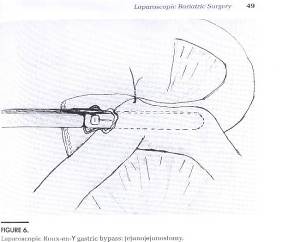 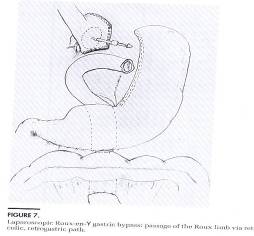 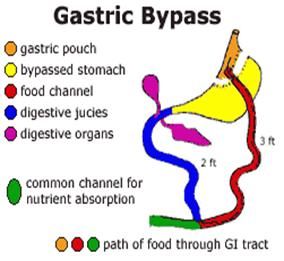 Discussion: The criteria of efficacy of any surgey and benefit depend on many factor such as :Weight LossDurability of weight lossShort-term complicationsReoperation RateLong-term complicationsImproved health outcomes in terms of weight-related comorbidities

* Lap. Vertical banded gastroplasty.There are numerous clinical series that report substantial amounts of weight loss following verticalbanded gastroplasty. weight loss of 75% to 100% of excess weight in first one year. But vertical banded gastroplasty has largely been abandoned as longer term, less favorable outcomes have been reported in the literature. While initial results in terms of weight loss, complications and improvement in co morbid conditions were good, these results deteriorated over time . The rate of revision surgery was 29.51% due to inadequate weight loss or complications. Also the procedure was less successful in the super obese patient .*Adjustable Gastric Banding

A major advantage of the LAGB is its safety. also Lower perioperative morbidity and mortality, gradual weight loss with few nutritional complications, and reversibility make LAGB is a good option .LAGB was associated with a median overall morbidity rate of 11.3% with a mean short-term mortality of 0.05%, compared with a 23.6% morbidity and 0.5% mortality for RYGB . Short operative time and hospital stay also is good advantage .

Weight loss after LAGB (especially in sweet eater) is significantly slower than after RYGB, so comparisons between the operations demonstrate superior

weight loss with RYGB . also The need for frequent adjustments is sometimes considered as disadvantage .

The ability to place a band laparoscopically in the massively super obese and in the older morbidly obese patient. offers significant advantages .

morbid obesity. The magnitude of weight loss can be achieved quickly , hospital stay about

3- 4 days, but long operation time ,need good skills and its irriversaple and risk of leak and malabsorption is high .

The magnitude of weight loss that occurs after the duodenal switch procedure is better than that achieved after the Roux-en-Y gastric bypass procedure.

The mortality and morbidity of the duodenal switch are comparable to other common weight loss procedures, also minimal dietary limitations and metabolic sequelae.also risk of leak is low as compaered RYGB surgey The only limitation is long operation time ,long hospital stay , need good skills and its irriversaple.

Conclusion: 1.Bariatric Surgery is an effective option for sustained w t. Loss in M. O. 2. Long term result from Lap. Bariatric operations should be similar to those of open.3. Lap. Approaches for treatment of M.O. are now available for all bariatric operations.4. Lap. ASGB is emerging as an alternative bariatric surgical option to VBG ,& GBP .5. The criteria used for selecting a patient for a particular operation are still based on surgeon`s experience , training & preference.6. Further studies are required to define subgroups of patients who will benefit from a particular operation.7. The Lap. Malabsorptive procedure is still experimental until further data support it`s safe