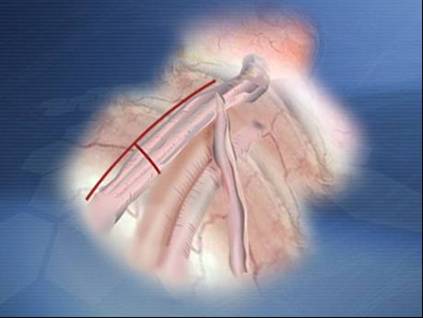 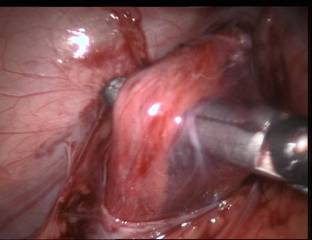 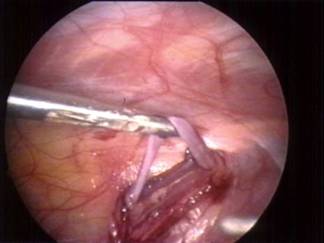 The technique of laparoscopic varicocele ligation is straightforward. The procedure is usually performed using general anesthesia A ure–thral catheter is placed to empty the bladder, and a Veress needle is placed at the umbilicus to inflate the peritoneal cavity with carbon dioxide. Alternatively, hassons technique can be performed at the inferior margin of the umbilicus, and the trocar can be placed into the peritoneum under direct vision. Three laparoscopic ports are placed for varicocelectomy according to baseball diamond concept.

The intra–abdominal vas deferens can be identified as structure joining the spermatic cord above the internal inguinal ring. The gonadal vessels are visualized easily in the retroperitoneum. The posterior peri–toneum is excised with cautery, laser, or endoscopic scissors. The gonadal vessels are then mobilized; however, reliably identifying the spermatic artery and its branches is sometimes difficult through the laparoscope. Therefore, many surgeons prefer to use the laparo–scopic Doppler probe to facilitate identifi–cation of the spermatic artery during laparoscopic varicocele liga–tion. The Doppler probe is 28.58 cm long and fits through a 5 mm laparoscopic port. After identifying the gonadal artery, the surgeon isolates the gonadal vein or veins using blunt dissection with atraumatic graspers.

Endoscopic clip applier is used to secure it or intracorporeal suturing is used to ligate the gonadal vein or veins while sparing the artery.

Laparoscopic retroperitoneal node dissection appears, at least for now, best applied to patients without evi–dence of bulky disease in the retroperitoneum who would oth–erwise be candidates for observation rather than surgical explo–ration. Although the laparoscopic procedure does not currently appear to be as thorough a dissection as the open node dissec–tion, it offers the opportunity to have some pathologic docu–mentation of nodal status in patients considered for observa–tion. The technique for laparoscopic retroperitoneal node dissection has not been standardized and is still evolving; there–fore, the reader is referred to the case reports for the authors individual techniques.

Lymphoceles are not uncommon after renal transplantation; an incidence of 0.6% to 18% has been reported. It can also occur after pelvic lymphadenectomy, and an incidence of 5.6% has been reported in this circumstance . Most of these patients are asymptomatic and do not require much aggressive treatment. When the lymphocele becomes symptomatic or is associated with fever and potential infection, however, drainage of the lymphocele is indicated. Several investigators have reported successful laparoscopic drainage of lymphoceles.

The technique of lymphocele drainage is described as follows. After the induction of general endotracheal anesthesia, the surgeon places a urethral catheter to drain the bladder, and a naso–gastric tube is then inserted. A Veress needle is inserted into the peritoneal cavity in the left upper quadrant to avoid the trans–plant allograft. A pneumoperitoneum is achieved in the usual manner, and an 10mm trocar sheath is inserted through the same site into the peritoneal cavity. The video endoscope is placed through this port, and two additional 5mm ports are inserted under direct vision in the periumbilical area in the right upper quadrant at the level of the midclavicular line.

The abdomen is carefully inspected, and the renal transplant and associated lymphocele are visualized. They appear as two extrinsic bulges in the retroperitoneum. The lymphocele is distinguishable by its supero lateral location to the graft and the soft consistency on probing. The lymphocele also transmits light readily when the light source is placed at its wall. The patient is placed in Trendelenburg position to allow the small bowel to fall cephalad and to facilitate the visibility of the lymphocele. The lymphocele is then entered using elec–trocautery. The peritoneum and its attached lymphocele wall are grasped, and the incision is extended circumferentially using laparoscopic scissors. An ellipse of lymphocele wall is removed, thereby creating a window. After careful martupialization of the edges of the window, the lym–phocele is inspected, and all internal loculations are lysed and excised to create a single cavity. At the end of surgery the cavity is irrigated and inspected for adequate hemostasis prior to the usual completion of the laparoscopic procedure.

In many centers laparoscopic surgeons are performing laparoscopic ileal loop conduit. This procedure is commonly performed for palliation of obstruction in old man with fibrosarcoma of the prostate. The ileal loop itself is fashioned laparoscopically using endoscopic stapling devices. To perform the ureteral anastomosis, however, the distal ureters and a portion of the conduit has to be brought in through a trocar site, and an extracorporeal, hand–sewn, ureteroileal anastomosis is performed on each side.

Laparoscopic pelvic lymphadenectomy has the potential to aid in the staging of prostate cancer. Most urologists embrace the philosophy that if the pelvic lymph nodes are involved in prostate cancer, cure cannot be achieved with radical prostatec–tomy or radiation therapy, and hormonal therapy is indicated in these patients for palliation.

Vascular injuries are most common complication during dissection. Adherence to good laparoscopic technique and familiarity with the anatomy are the most reliable ways to avoid complications.

The pneumoperitoneum is established in the standard manner. Trocar placement is then performed. The size and location of trocar sites for the procedure vary with the surgeon's preference. Most use the diamond configuration. An alternative used by some surgeons is the so-called fan configuration for tro–car placement. This configuration allows the surgeon and the surgical assistant to manipulate instruments with both hands during the dissection. It is also helpful in obese patients or in those with a prominent urachus. The size of the trocars used at each site may vary. A 10mm port is usually placed in the umbilicus for the laparoscope. An additional 10mm port is placed in at least one other site for tissue removal. Another 10mm port is used for the endoscopic clip appli–er. Usually, 5mm ports are used for the remaining trocar sites. After completion of trocar placement, the laparoscopic land–marks for pelvic node dissection are identified. These landmarks include the medial umbilical ligament (remnant of the obliterat–ed umbilical artery), urachus, bladder, vas deferens, iliac vessels, spermatic vessels, and internal ring. The next maneu–ver is to incise the posterior peritoneum parallel and lateral the medial umbilical ligament . Early identification of the ureter is important to avoid ureteral injury. The vas deferens is then divided to facilitate operative access to the obturator space. Using primarily blunt dissection, the iliac vein and artery are identified. The nodal tissue overlying the external iliac vein is then teased medially to expose the internal obturator muscle. A laparoscopic vein retractor can be used to retract the external iliac vein laterally and permit easier, more complete dissection of the nodal tissue beneath the vein. The dissection proceeds with removing tissue off the vein distally until Cooper's ligament and the pubic bone are identified.

Electro surgery is used to fulgu–rate small vessels and lymphatics, and the distal extent of the packet is freed from the pubic bone. The packet is pulled prox–imally and freed from the underside of the pubic bone. At this point, the obturator nerve is identified. Because nodal tissue can be quite bulky and difficult to grasp, adequate forceps can ensure a more reliable grasp of the specimen. With blunt dissection, the obdurator nerve is cleaned off proximally, and endoscopic clips are used to divide the distal portion of the dis–section. At the completion of the laparoscopic pelvic lym–phadenectomy, the iliac artery, vein, pubic bone, and obturator nerve can be seen clearly. The field is checked for hemostasis, and the dissection is performed in an identical manner on the opposite side. The trocars are removed, and the puncture sites are closed in the usual manner