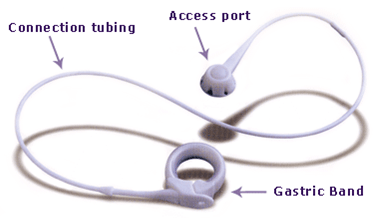 The most frequently performed gastric procedures for morbid obesity today include the Roux-en-Y gastric bypass (RYGB) and vertical banded gastroplasty; however, four basic approaches have been traditionally used for the treatment of obesity. The first operation done for obesity was the jejunoileal bypass. This operation was aimed to bypass 90% of the jejunum and ileum to induce malabsorption. This operation was abandoned due to a high incidence of severe complications such as hepatic failure, cirrhosis, nephropathy, and numerous other metabolic complications. The gastroplasty was developed to limit the amount of oral intake per meal. This operation involves partitioning the stomach into a small upper pouch that empties through a restricted stoma. The vertical banded gastroplasty is the most popular version of the gastroplasty. The third approach to obesity is Roux-en-Y gastric bypass. This operation also involves formation of a small upper gastric pouch that is anastomosed to a Roux-en-Y jejunal limb. The operation both limits oral intake per meal as well as induces dumping syndrome. Lastly, the partial biliopancreatic bypass induces a selective maldigestion and malabsorption. This operation involves a partial gastrectomy and diversion of the biliary and pancreatic secretions to the distal 50 cm of ileum; it is primarily performed in the "super" obese population (BMI > 60 kg/m2). The most recent development has been the modification of the adjustable silicone gastric band developed by Kuzmak. This gastric banding device has been modified for laparoscopic placement and is a form of gas–tric restriction or gastroplasty.

The goals of surgery are to induce and maintain weight loss. Outcome from surgery is usually expressed as the amount or percent of excess weight lost. Several trials have compared the effect of gastric restriction versus gastric bypass. Subsequently several trials have confirmed that Roux-en-Y gastric bypass results in more weight loss compared with Gastric Banding. The early complications following Roux-en-Y gastric bypass operation for obesity include subphrenic abscess or leak from an anastamosis or staple line. This complication is usually amenable to percutaneous aspiration and drainage, however, a small number of patients will require re-operation. The majority of early postoperative complications are minor wound infections and seromas. Late complications of the Roux-en-Y gastric bypass include vitamin B 12 and iron-deficiency. On the other hand, vitamin B12 and iron –deficiency anemia is uncommon after vertical banded gastroplasty. Incisional hernia is another complication of morbidly obese patients undergoing laparotomy. Other late complications include failure to lose weight, late weight regain, and outlet stenosis. Staple line disruption has been a common problem and has prompted the use of four rows of staples instead of two. Another approach has been to divide the stomach to produce an isolated gastric pouch.

To perform Laparoscopic Vertical banded gastroplasty the patient is placed in reverse trendelenburg position with the legs separated in low stirrups. The surgeon stands between the patient's legs. An alternative approach is to place the patient supine with a footrest in the reverse trendelenburg position. The surgeon stands on the patient's right side with an assistant on the left. Five trocars are placed in the standard manner for gastric surgery. The telescope is placed through the 10-mm mid epigastric port, and the liver retractor is placed through a right subcostal port. There are two operating ports, one in each paramedian position (right, 10 mm to 33 mm; left, 15 mm). A window is created at the lesser curve of the stomach in an avascular plane using harmonic shears. The posterior stomach wall is freed of any adhesions. An alternative approach to the lesser sac is made by dividing the gastroepiploic vessels along the greater curvature. A 32-F dilator is placed via the mouth into the stom–ach. A site on the anterior stomach 4 to 5 cm from the gastroe–sophageal junction and 3 cm from the lesser curve is marked with the electrocautery. This site will be the center of the circular stapler. The right paramedian port is upsized to a 33-mm port to allow introduction of the circular stapling device. The anvil of the circular stapler is then placed posterior to the stomach. The pointed trocar is inserted through the stomach at the site previously marked with the cautery. The stapler is then connected and fired.

The attachments from the diaphragm to the fundus of the stomach are divided, and the fundus is dissected inferiorly using blunt technique. A linear 60-mm, four-row, noncutting stapler is introduced through the left paramedian port. The stapler is inserted through the circular window along the dilator and fired. A linear cutter is applied lateral to the previously placed rows of staples. At the circular window a strip of polypropylene or polytetrafluoroethylene (1.5 x 5 cm) is brought around the stoma. The band is sutured into place around the dilator. A nasogastric tube is not mandatory with this procedure.

Patient positioning and port placement is as for other gastric procedures. The dissection starts at the fundus of the stomach with division of the phrenicogastric ligament. The fundus is mobilized in an inferior direction by blunt dissection. On the anterior wall of the stomach, an electrocautery mark is made 4 to 5 cm distal to the angle of His to serve as a landmark for the size of the gastric pouch. The lesser omentum is then opened adjacent to the mark at 4 to 5 cm inside the nerve of Laterjet. Dissection is carried through the lesser sac to an opening near the angle of His. The medial subcostal port is changed to an 18-mm port and a straight four-row cutting 60-mm stapler is used to divide the stomach. A standard 60-mm Roux limb is fashioned by dividing the proximal jejunum with a 60-mm linear stapler. The limb is brought up in a retrocolic, retrogastric path to the small (15 ml) proximal gastric pouch. A circular stapler is used for the gastroje–junostomy. The anvil is inserted via the oral cavity by endoscopic approach and using a percutaneous pull wire technique. An anastamosis is fashioned by connecting the anvil to the stapler introduced through the 18-mm port. A stapled side-to-side entero–enterostomy is then done to restore gastrointestinal continuity.

An alternative gastric restrictive operation is the adjustable silicone gastric banding (ASGB) procedure. It was first introduced for placement through laparotomy by Kuzmak in 1986. This operation has the advantage of being the least inva–sive operation as it is completely reversible and allows for adjust–ment of the gastric pouch outlet.

The main steps of laparoscopic adjustable silicone gastric banding are as follows.

The patient is placed in a lithotomy position and in reverse trendelenburg as for most gastric operations. A total of six ports are placed. The liver retractor is placed through a right subcostal one, the telescope is inserted through a subxiphoid positioned port. The main operating ports are in the right and left paramedian positions. The assistant uses a left subcostal and an epigastric port. The left paramedian port is 15 mm for introduction of the band device. All of the other ports are 10 mm.

A gastric calibration tube is placed via the mouth into the stom–ach. The balloon is inflated to 15 cc and pulled up through the gastroesophageal junction. A site on the lesser curve is chosen to begin dissection that corresponds to the widest circumference of the balloon inside stomach. The balloon is deflated and the tube is withdrawn back into the esophagus. A retrogastric tunnel is then creat–ed using blunt dissection, staying close to the gastric wall. The pos–terior gastric wall should be easily recognized to prevent injury. A small opening in the phrenicoogastric ligament is made with electrocautery. A grasping instrument is then placed through the retrogastric tunnel. The band is then introduced into the abdomen and grasped with the instrument. The band is pulled into position around the stomach. The calibration tube is then reinserted into the proper position and the band closed around the tube. The cal–ibration tube allows for proper stoma calibration. At least four sutures are then placed in the seromuscular layer of the stomach just proximal and distal to the band to keep it in the proper posi–tion otherwise the chances of displacements are there. The injection port is then connected to the band tubing and implanted into the left rectus sheath at the paramedian port site.

In developed world obesity is a major national health problem. It is clear that morbidly obese patients suffer from significant comorbidity and die at younger age than healthy weight individuals. Weight loss to, and maintenance of normal weight corrects the majority of weight-related morbidity and returns life expectancy to that of –the general population. All the laparoscopic surgeons should remember that morbidly obese patients are at an increased risk of significant morbidity and mortality with laparoscopic surgery. However, strict attention to detail allows for proper selec–tion of patients for surgery with reduction in the perioperative risk.