The most common indications for oophorectomy are:

Patient should be in steep trendelenburg and lithotomy position. One assistant should remain between the legs of patient to do uterine manipulation whenever required.

Port position should be in accordance with baseball diamond concept. If the cyst is on left side, one port should be in right iliac fossa and another below left hypochondrium.

Properly placed uterine manipulator is important to get a good exposure of ovary and tube. It is sometime difficult to immobilize the ovary because of its smooth surface and finer texture. In case of difficulty in immobilizing the uterus the uterine-ovarian ligament can be grasped by one of the atraumatic grasper to lift and isolate the ovary or the ovary can be wedged against the pelvic sidewall using the flattened edges of the opened or closed forceps. It is important to remember that overly aggressive manipulation can cause lacerations in the capsule, follicles, or cysts and result in bleeding. Before starting the proce–dure, it is important to observe the course of the ureter as it crosses the external iliac artery near the bifurcation of the common iliac artery at the pelvic brim. The left ureter can be more difficult to find because it is often covered by the base of the sigmoid mesocolon. If the ureter is difficult to identify transperitoneally it must be identi–fied by retroperitoneal approach. If previous hysterectomy is done it is better to insert a vaginal probe or sponge stick through the vagina so that the surgeon can maintain orientation, particularly with proce–dures involving extensive adhesions. Many time ana–tomic landmarks are distorted by adhesions, endo–metriosis, or prior surgical extirpation. In those cases dissection should be started from the most normal area and then it should proceed toward the more distorted parts of the operative field. Attention should be given that complete ovary must be removed to prevent ovarian remnant syndrome or tumor development in a dysgenetic gonad. At the end of the procedure, the oper–ative field is inspected and any clots are removed with a suction-irrigator or grasping forceps. Pedicles are inspected under water and with decreased pneumoperitoneum and any bleeding if present can be controlled with bipolar electrocoagulation.

Dissection of the Infundibulopelvic Ligament

Three techniques have been described for manag–ing the infundibulopelvic ligament.

Patient cost for the linear stapler is approximately Rs. 4500 and Rs. 250 for each pretied ligature. Considering these expenses bipolar electrosurgery is most economical way of dissection and it is preferable for haemostasis of the infundibulopelvic ligament.

Endoloop cannot be applied in the presence of adhesions and distorted anatomy. Sometime it is difficult to place endoloop sutures on large bunch of pedicles such as the mesovarium and infundibulopelvic ligament. If extracorporeal slip knot is applied over wide pedicle, the slip–knot can loosen under the tension of the large pedicle. It may increase the risk of intraoperative hem–orrhage. If the stump is large a piece of the ovary may be left in the pedicle, predisposing the patient to ovarian rem–nant syndrome.

Aside from cost, the linear stapling device has several other drawbacks. It should must be introduced though a 12mm trocar. Insertion of bigger trocar can lead to injury of the inferior epi–gastric artery and predispose the patient to a post–operative hernia. The linear stapler instrument is bulky and the operator must be careful to its proximity to the ureter, bowel, and bladder. If correct size staple is not selected the staples may dislodge and bleeding may start.

The mechanism of closure of large blood vessels and the principle of tissue sealing with high frequency electrocoagulation is explained in chapter of laparoscopic electrosurgery of this book.

If complete salpingo-oophorectomy is planned, an ovary and tube can be approached either from the infundibulopelvic or utero-ovarian ligament. Filmy adhesion limiting the mobilization of ovary should be dissected first. If ovarian cyst is found it should be aspirated and deflated, making removal of the ovary easier. The proffered approach is dissection should begin with the infundibulo ligament because it is easier and this approach is essential if prior hysterectomy is performed. The lateral approach is essential if the haemostasis from ovarian vessel is thought. The ovary is held with a grasping forceps and infundibulopelvic ligament is put under traction by pulling it up and medially. 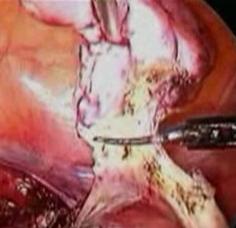 Figure: Dissection at the level of infundibulo-pelvic ligament.

The infundibulopelvic ligament is desiccated with bipolar forceps and cut with scissors from lateral to medial.

It is important to use appropriate traction away from lateral pelvic wall to prevent excessive coagulation and damage to the lateral pelvic structures like ureter or vessels in triangle of doom.

Laparoscopic linear stapling and cutting device can also be used for salpingo-oophorectomy in selected cases. Laparoscopic extra-corporeal Readers or Meltzer's knot can also be applied. Pretied loop are easy to use but pedicle should not be wide. In cases of wide pedicel window can be created in mid point of infundibulopelvic ligament and extra-corporeal knot for continuous structure should be applied.

Sometime dysgenic gonads can be found at the time of laparoscopy and require gonadotomy to prevent gonadoblastoma. The laparoscopic removal technique of dysgenic gonad is same to removing an ovary with adhesion to lateral pelvic wall. In these difficult cases hydro dissection is of utmost importance.

Drilling of polycystic ovary is a common procedure performed laparoscopically. Polycystic disease of ovary has various manifestations but its hallmark is chronic anovulation. Ovarian wedge resection is advocated for these enlarged ovaries. However, there is chance of returning to previous inoculators state is quite high after several month. There is also increased risk of adhesion formation after laparoscopic ovarian wedge resection. Availability of ovulation inducing medicines clomiphene citrate around 1970s has offered a non surgical management of this disease. Initially wedge resection of polycystic ovary was tried but later laparoscopic ovarian drilling appears to be associated with comparable rates of ovulation and conception.

The laparoscopic technique uses a 5 or 10mm umbilical port for telescope and 5 mm port in left iliac fossa or suprapubic region. With the help of one atraumatic grasper one ovary is kept held by tubo-ovarian ligament. At laparoscopy, multiple symmetrically placed holes are made over sub capsular follicular cystic stroma. Polycystic drilling generally does not bleed like physiological follicular cyst following incision. Each ovary is treated symmetrically and cysts are vaporized. The ovaries are irrigated and haemostasis is obtained by the help of bipolar forceps. If aspiration needle is used for monopolar drilling 30 to 40 watt current is used in a cutting mode. The power is activated just before touching the ovary and it should be penetrated at 4 to 8 sites at a depth of 4mm.

Adnexal torsion is a surgical emergency and if diagnosed early the adnexae can be unwound. It occurs most frequently if there is an adnexal lesion. It occurs generally in young women in whom preservation of ovary may be necessary. If diagnosis is delayed the adnexae may become gangrenous. 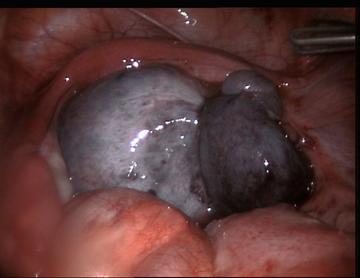 If conservative treatment is planned the torted structure is straightened to assess the viability and even ovary that appears infracted at laparotomy regain normal colour after untwisting. Causes of ovarian torsion include par ovarian cyst, functional and pathologic ovarian cyst. Ovarian hyper stimulation. Ectopic pregnancy. Adhesions, Congenital malformation, Ischemic structure straightened gently with the atraumatic forceps to avoid additional adnexal damage. In women with ovarian hyper stimulation, the functional cyst should be drained before untwisting. The abnormalities contributing to torsion should be treated. It may be necessary to shorten the utero-ovarian ligament, if its length has contributed to ovarian torsion. A running suture of monofilament material is placed along the utero-ovarian ligament and tie to shorten it, limiting ovarian mobility.

In premenopousal women who had undergone bilateral Oophorectomy, small piece of functional ovarian tissue can respond to hormonal stimulation with growth, cystic degeneration or hemorrhage and produce pain. Ovarian remnant remains because of dense adhesion and distorted anatomic relationship, which invariably worsen with subsequent operation. It is not unusual for these patients to have had previous attempt to excise an ovarian remnant. Removal of the ovarian tissue is preferred. Diagnosis is based on history and localization of pelvic pain. Although some patient have cystic adnexal structure or ill defined fixed masses, others have normal pelvic findings. Vaginal ultrasound helps to locate the ovarian remnants. Low or borderline FSH levels in patients with documented bilateral Oophorectomy are consistent with the presence of active ovarian tissue. Hormonal suppression, with oral contraceptives or gonadotropin releasing hormone agonist provide no relieve in most patients. Clomiphene citrate or hMG may be used to increase the ovarian remnant size to confirm the diagnosis, pre-operatively or to aid in locating the tissue intraoperatively.

The anatomy of the retroperitoneal space should be identified when the ovarian remnant is adherent to the lateral pelvic wall. Space beneath the peritoneum is injected with lactated ringer solution and the peritoneum is opened to the infundibulo pelvic ligament or its remnant. Adhesions are lysed until the course of the major pelvic blood vessels and ureter can be tressed and if necessary dissected. The ovarian blood supply is desiccated with bipolar forceps and ovarian tissue is excised and submitted for histological examination.

These cysts are most commonly found over the serosa surrounding the tubal fimbriae. Usually puncture with fine electrode is sufficient for these patients. Only 40 to 50 watt of cutting current is required for a fraction of second and cyst will burst. Sometime if these par ovarian cysts are large and intermingled with the serosa surrounding the fimbriae and may be attached with lateral pelvic wall. In these cases, opening of peritoneum is necessary for hydro dissection. Once the cyst will leave the pelvic wall