Myomectomy is a procedure in which uterine fibroids are surgically removed from the uterus.  Uterine fibroids (also known as myomas) affect 30% of women.  While many fibroids do not need treatment, others can cause abnormal uterine bleeding, pressure, pain, or other symptoms. 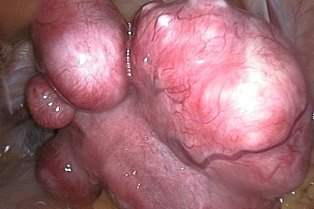 Fibroids are a common uterine tumor affecting 20 to 25% women. Fibroid develops from benign transformation of a single smooth muscle cell. The growth of Myoma is dependent on many factors. Increased estrogen stimulation alone or together with growth hormone or human placental lactogen appears to be the major growth regulator of Fibroid. The severities of symptoms depend on the number of tumor, size and location. Many time they cause abdominal pressure so, urinary frequency, abdominal pain or constipation. One of the common finding is DUB due to altered blood flow through the uterus. The fibroid many time not affect pregnancy. In women with menorrhagea the hematocrit is use to asses the degree of anemia. Patients with large broad ligament fibroid may require an intravenous pyelogram to rule out any ureteral obstruction. For anemic patients preoperative treatment with gonadotropin releasing hormone may enable restoration of a normal hematocrit and decrease the size of Myoma and thus reduce the risk of transfusion. Intraoperatively use of dilute vasopressin helps to minimize the blood loss. Vertical uterine incision bleed less than transverse incision. Single, vertical, anterior, midline incisions are least likely to form adhesion.

Although sutures predispose to adhesions, they are often necessary to close the uterine defect. If the endometrial cavity is entered due to large myoma a patient who subsequently becomes pregnant should undergo cesarean delivery. Preoperative GnRH agonist has been used by some gynaecologists to decrease myomas and intraoperative blood loss. The risk of future uterine rupture is a major concern following myomectomy. The difficulty of adequately closing the all layers laparoscopically and use of electro-coagulation may contribute to the risk of uterine rupture. Uteroperitoneal fistulas may follow laparoscopic myomectomy because meticulous laparoscopic approximation of all layers is very difficult. Use of electrosurgery for haemostasis inside the uterine defect may also increase the risk of uteroperitoneal fistula formation. The chances of postoperative adhesion are also quite high in case of laparoscopic myomectomy. A single uterine incision for removal of multiple leiomyomas and subserosal approximation of the uterine defect should be done. Laparoscopic assisted myomectomy can reduce the chance of this complication. The suturing will be done outside so decreasing the operating time and secure layered suturing will not have fear of rupture of uterus in later pregnancy. Pelvic observation during the laparoscopy allows the diagnosis and treatment of associated any other disease like endometriosis or adhesion. The criteria for LAM are myoma greater than 5cm, numerous myomas, requiring vigorous use of morcellator, deep intramural Myoma and removal that require uterine repair with sutures.

Pedunculated myomas are easiest to remove by just coagulating and cutting the stalk. Diluted vasopressin may be injected in the base of stalk. Intramural fibroid require more manipulation so dilute vasopressin should be injected to multiple site between the myometrium and the fibroid capsule. An Incision is made on the serosa overlying the leiomyomas using the monopolar electrode. The incision is extended until it reaches the capsule. The myometrium retracts as incision is made, exposing the tumour. Two grasping tooth forceps hold the edges of myometrium and the suction irrigator is used as blunt probe to remove covering of the leiomyomas from its capsule. The Myoma crew should be inserted into the fibroid to apply traction while the suction irrigation instrument can be used as a blunt dissector. The CO2 laser is used to further dissect capsular attachment. Vessels are elecrocoagulated before being cut. After complete Myoma removal the uterine defect is irrigated, bleeding points are identified and controlled with the open jaw of bipolar. If the fibroid is small and patient does not want baby the edges of the uterine defects are approximated by coagulating the myometrium without suturing and tubeligation is performed. If the defect is deep situated, the edges of defect should be approximated by using 4-0 PDS. The repair mainly involve serosal and subserosal layer or can be in one layer. Sutures are applied at a distance of 5mm. After repair thorough suction and irrigation should be performed. Some gynaecologist use adhesive medical glues over the suture line to prevent adhesion. Even in the hand of expert the laparoscopic myomectomy is difficult. Tumble square knot is better to use if the edges are in tension. Dundee jamming knot with continuous suturing may be used if there is not much tension followed by Aberdeen termination. Precise suturing of several layers is almost impossible laparoscopically. Intraligamentous and broad ligament fibroid are difficult to remove due to risk of injury to ureter and uterine artery at the time of dissection. Following a thorough exposure of ureter and vessels and depending on the location of Myoma, an incision is made on the anterior or posterior leaf of the broad ligament and the leiomyomas is slowly shelled same as other subserosal or intramural fibroid. Throughout the procedure the location of the ureter is monitored, bleeding points are controlled by bipolar. The broad ligament and peritoneum are not closed in cases of broad ligament Myoma. If post operative bleeding is suspected, a drain should be left.

Fibroid removal is one of the difficult and time consuming procedures. Larger Myoma may be removed through posterior colpotomy. In women with concurrent posterior cul-de-sac pathology posterior colpotomy is not safe. Medium and large size fibroid is morcellated using a morcellator, scalpel or scissors. The process is ineffective for calcified myomas. For infected tissue and in case of suspected carcinoma tissue retrieval bag should be used. Many sizes of disposable tissue retrieval bags are available and hard rim of these retrieval bags are easy to negotiate inside the abdominal cavity.

For large size gynaecological tissue, colpotomy route is good for retrieval. Colpotomy can be done laparoscopically with the help of heal of hook. Counter pushing by other instruments is effective. Sponge over sponge holding forceps is inserted in posterior vaginal fornix by one assistant and surgeon cuts the vaginal fascia between both the uterosacral ligaments with the heel of hook. 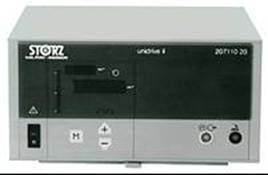 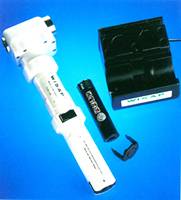 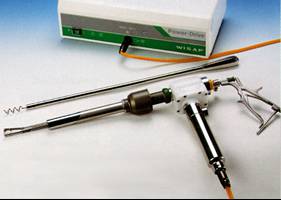 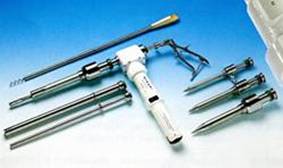 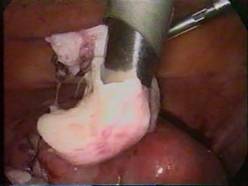 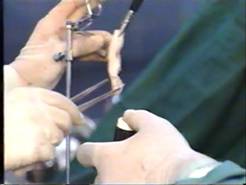 Use of morcellator is another way which facilitates grinding of solid tissue and then these can be taken out without any difficulty. Recently many companies have launched battery operated morcellator. The morcellator is important instrument for tissue retrieval in myomectomy and splenectomy.