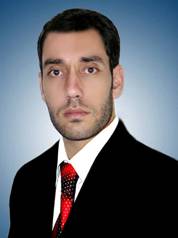 In present article, the usefulness of laparoscopy in diagnosis and treatment of undescended testis is discussed.

Undesended testis is one of the disorders which is common among children in childhood urology.

Here in the initial experience in laparoscopy management of undescended testis will be presented. Laparoscopy was performed on thirteen patients under general anaesthesia , the inguinal canal has been dissected if vas deferens and the internal spermatic vessel made the ways into the internal inguinal ring , orchiopexy or orchiotomy has been performed laparoscopically in cases of intra abdominal testis.

If the internal spermatic vessles has been found terminated interaperetoineal with a blind end the case is going to be considered as a vanishing testis, 13 boys who have been identified with twenty one impalpable testis were between 18 months up to twenty five years ( median 9.8 years ) fourteen of the twenty one impalpable testis , the vessel and vas deferens were seen through the internal ring and the inguinal region needed dissection and then orchiopexy was performed on twelve testis and orchioctomy was performed on two atrophic testis laparoscopically . Four of the twenty one of the testis were found intra abdominal and were localized . Orchiopexy has been performed laparoscopically on two testis and orchiectomy has been performed in two testis laparoscopically and two have been diagnosed vanishing testis and the one which was absence found unilateral on the left side in one of the cases and in the other found bilateral. Laparoscopy is an excellent and help full for diagnostic parposes as well and laparoscopy is the best technique in the diagnosis of undescended testis especially when sonography, C T scaning, MRI are not informative enough.On the other hand orchiopexy and orchiotomy can be done in patients via laparoscopy in intra abdominal testis so the laparoscopy has the most effective and important role in the treatment and diagnosis of the undescended testis.[2,3,6,9,23,42,]

Aim is to examine and valuate the role of laparoscopy management of undescended testes.

Sign: Testicles are the male reproductive organs that produce sperm and the male hormone, testosterone. One or two testicles will not be present in the scrotom during examinations and the testicles might or might not be on the abdominal cavity[2]. In most of boys, undescended testicle descends into the scrotum by itself only. When the testicle doesn't descend, then we recommend surgery after the first year of life experience with undescended testes has showed that outpatient surgery is safe and effective, with excellent outcomes.

Symptoms: Usually no symptoms is present other then inability to find the testicle in the scrotum but in adult infertility will be reported due to undescented testis[2,4].

The records on a group of boys who went under diagnostic laparoscopic from 16 patients with 20 undescended testis were found[7] , the data which is collected contains the following , affected side age of the patients ,location of the testis at the time of laparoscopy, operation performed ,complications and the surgeon who performed the surgery. A day before the surgery a clear diet is started and 4-8 hours fasting is required based on the age of the patients and Cefazolin Sodium 40mg/Kg is given to the patient via IM. Physical examination should be done to see if the testis is palpable before the laparoscopy under general anesthesia then the patients is catheterized only if the bladder was palpable. In patient should be in Trendelenbureg position and an incision is made in to the peritoneum and Hasson 5mm blunt trocar was inserted into peritoneum under vision of the telescope and then the abdomen was insufflated with carbon dioxide with pressure of 10 mm Hg and then palpation on the abdomen was done and the abdomen was laparoscopically inspected to rule out any injury and then specific attention to the landmarks ,the location of the length of vas deferens , testicular location and vessels and the presence of a patent processus vaginalis, and volume of the testis,particular anomalies , presence of inguinal hernia were determined[5,7,9] If the testis were found in the abdomen then the size of the testis , mobility ,distance between two testis , appearence, size , length of spermatic vessels and should be also seen and checked and then two more ports inserted , 5 mm in iliac fossa and the other suprapubicaly , in case if the testis was found atrophic then a 10 mm port was inserted and testis was mobilised and gonado vessel disected and clipped and then with a 5 mm trocar which is inserted through the scrotom and then the testis is pulled down. In case if the undescended testis is bilateral an other 10 mm trocar should be inserted on the midclavicular line just bellow the costal margin and then the laparoscopy procedure was performed based on the findings.[7,8,9,10,11,12,13,17,18]. Radioisotope scanning to determine the testis position and its viability is the post operation evaluation[1314,15,16] 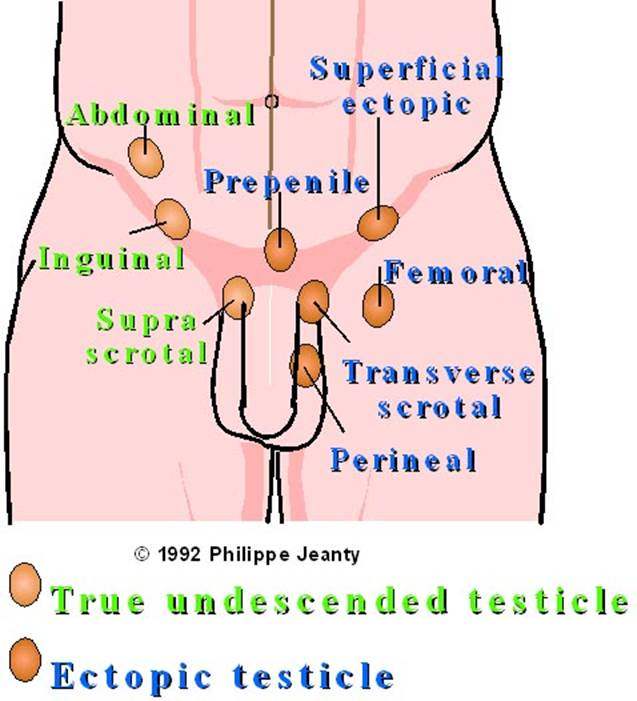 Laparoscopy was performed on thirteen patients who were between eighteen months to 25 years old and 21 impalpable testes were found, from the above mentioned number of patients 9 were in stage of prepubertal , 4 of the patients were in stage of post pubertal, in all these cases the inguinal ring has been seen explored and spermatic vessels and vas deferens were found through the internal ring (66%). In surgical exploration , in 12 testes orchiopexy was performed (57%),and in two testes orchioctomy was performed. On those that the testes were atrophic (9.5%) and on the rest of two (15.4%) beside orchiopexy the repair of inguinal hernia was performed as well. No intra operative compalications were seen , there was not major blood loss during the surgery the operation time was mainly 20 minutes for diagnostic and a mesh was needd for the repair of inguinal hernia which was inserted , the patients were discharged during the next two days from the hospital , even those who were under laparoscopic orchiopexy or orchiotomy have been discharged form the hospital during the first twenty four hours and satisfactory result was achieved . No post operative complications reported in all the above mentioned patients[18,19,20]

Literature in laparoscopy shows that the accuracy rate of the location of the testis is more then 95% in laparoscopy.Laparoscopy has been help in localize testis and the operation guided by laparoscopy safely and can be used for all ages group. Perinatal torsion is usually cause in absence of testes It is obligatory to assess infuinal canal if spermatic vessels are through the inguinal canal and these vessels might extend to a testis which can be small and might remain in seminiferous tubules and removal must be done in time. laparoscopy has been seen to established as the most reliable diagnostic and treatment management for undescended testis.The anatomy can be demaonstrated clearly and visual information can be provided by laparoscopy which a definite decision will be made.[3,4,5,7,9,11].

A proper introduction of the neddle and telescope is the great help for reaching the proper diagnose in undescended testis sweft and less traumatic.

All other modalites used for diagnostic like ultrasonography, computerized tomography ,resonance and venography have never been as accurate as laparoscopy and are not reliable especially in cases which are reported negative [24,25,26,27] .

We prefer not to try to reduce the testis via scrotal incision and then and artery forceps has been introduced in the internal ring this is found more traumatic and not very simple . In case if the testis could not be broght to the base of the scrotum then it is wrapped it in a silastic membrane and six mounts and then re explored.If the testis was above the internal ring and associated woth closed internal ring then ligation of the testicular vessels with metal clip is recommended without dissecting aggressively at this stage[26,27,28] and after six mount the testis can be brought to the scrotal base which the artery vessal will be developed well.

Laparoscopy is remained the modality of choice for the surgical management anddiagnosis of undescended testis which can be achieved 100% accurate. Atrophic testis should be removed in laparoscope , finally laparoscopy become the methode of choice for diagnosis as well instead of costly investigation like MRI and computer tomography and also prevent unnecessary laparotomy and inguinal exploration[29,30,31].

Complications rarely is reported in diagnostic laparoscopy as the interior wall of the abdomen in children is thinner comparing with adults and this is why the complication is higher in children especially when an un appropriate Veress needle is used , the intestines and vessels might be damaged during insufflations or during the insertion of needle.This is why the complication rarely occurs in patients, no damages have been observed by us how ever leakage CO2 in quite in a few cases to preperitoneal and changing in direction of the needle and formed an appropriate pneumoperitoneum has been reported[16,19.24]. In order to prevent this complication , Hasson method is required and those who had previouse abdominal surgeries but for other cases where is no scar and the risk of the complication is low, Hasson technique is not preferred.

In adult, orchiectomy is the choice of treatment, in cases of unpalpable testis unnessessary surgical intervention can be avoided by laparoscopy, helps to localizes the testis and determine paratesticular pathologies and an appropariate surgical procedure can be selected and orchiopexy performed safely and unnessesary operation can be avoided [6,9,13,24,25,26]

If comparing the operation time, laparoscopically is usually longer then open, operation but with experienced hand the duration can be shortened.

And, finnaly laparoscopy is the most important in diagnosis and treatment of undescended testis and has its own advanteges like less complication rate, less severe post operative pain shorter stay in the hospital, less scar and early return to normal activities [12,13,16,23,26,27].

If laparoscopy examination is unsatisfactory for some reason then exploration is still indispensable for the management of undescended testis.