Laparoscopy is one of the major advancement for tubal and uterine disease. Surgical procedures for managing benign adnexal masses include aspiration, fenestration, ovarian cystectomy, unilateral or bilateral salpingo-oophorectomy and laparoscopically-assisted vaginal hysterectomy (LAVH) with or without unilateral or bilateral salpingo-oophorectomy

The risk of ectopic pregnancy is higher in white women. It increases three to four times in women between the age of 35 and 44 compared to those from15 to 24. About 64% of ectopic pregnancies occur in the ampulla where fertilization occurs. The recent increase in incidence of ectopic pregnancy has been attributed to a greater incidence of sexually transmitted disease, delayed childbearing, previous sexual organ surgical interference and successful clinical detection. Any condition that prevents or retard migration of fertilized ovum to the uterine cavity could predispose a woman to an ectopic gestation. 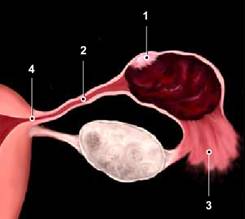 Ectopic pregnancy usually occurs 99% of cases in the uterine tube. It can be found in

If laparoscopy is planned, the location, the size, and the nature of the tubal pregnancy are ascertained. If the bleeding has ceased or can be arrested adequately, rupture tubal pregnancies can be treated successfully endoscopically. Once bleeding is controlled, the products of conception and blood clots are removed. If there is more than 1500 cc hemoperitoneum, laparoscopic approach is contraindicated. Heparinized saline should be used in cases of large haematoma. Large ruptured ectopic require extracorporeal knotting.

A 10 mm suction instrument is used to clean the abdominal cavity. Forced irrigation with normal saline should dislodge the clot and trophoblastic tissue from the serosa of the peritoneal organs with minimal injury to these structures. 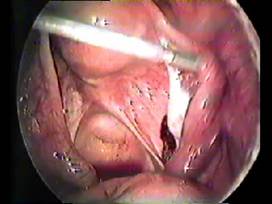 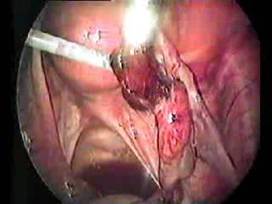 For unruptured tubal pregnancy the fallopian tubes is identified and mobilized to minimize bleeding, a 5 to 8 ml diluted solution containing 5 Unit vasopressin in 20 ml of saline is injected with a 20 gauge spinal or laparoscopic needle. It should be injected in the mesosalpinx just below the ectopic and over the antemesentric surface of the tubal segment containing gestational product. The needle must not inserted deep within a blood vessel because intravascular injection may precipitate acute arterial hypertension, bradycardia and sometime it may be fatal. 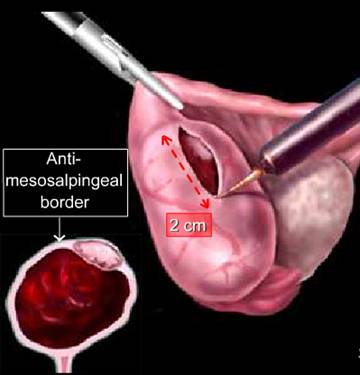 After stabilizing the tube by grasper in one hand and microelectrode in other, a linear incision is made on the antimesenteric surface extending one to two cm over the thinnest portion of tube. The fine needle tip should be used in the cutting mode, and should barely touch the tissue surface. With electrosurgery, thermal damage may spread if large tips are used on large surface areas in contact with tissue. It is important to remain aware of the location of underlying or adjacent structures. If the gynaecologists are not careful there may be a chance of adjacent visceral injury. 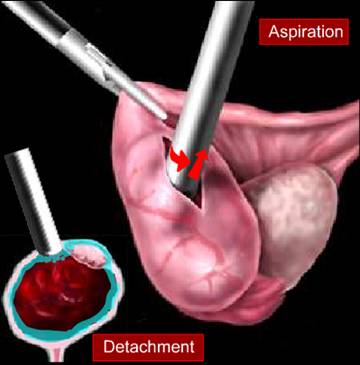 The pregnancy usually should protrude through the incision and slowly slips out of tube. It may be teased gently out using hydro dissection or laparoscopic atraumatic forceps.  Sometimes forceful irrigation in the tubal opening can dislodge the gestation from implantation. As pregnancy is pulled out or extrudes from the tube, some of the product of conception can adhered to the implantation site by a ligamentous structure containing blood vessels. Using bipolar this structure should be coagulated before removing the tissue. Depending upon the size of the product of conception ectopic is removed usually though a 10 mm trocar sleeve.

Resection of the tubal segment containing the gestation is preferable to salpingostomy for an isthemic pregnancy or a ruptured tube or if haemostasis is difficult to obtain. Segmental tubal resection is performed by the help of bipolar forceps or harmonic scalpel. Automatic stapling or suturing devises can be used for bloodless tubal resection. The mesosalpinx if bleed should also be cauterized by using bipolar forceps, particular attention given to the arcuate anatomizing branches of the ovarian and uterine arteries. Total salpingectomy is performed by progressively coagulating and cutting the mesosalpinx, beginning with the proximal portion to fimbrial end. It is separated from the uterus using bipolar coagulation and scissors. The isolated segment containing the tubal pregnancy is removed intact or in sectioned part, through the 10 mm trocar sleeve. The product of conception can be placed in a plastic bag and removed. Multifire stappeling devices for salpingectomy require a 10 mm trocar. If the tissue is bulky and can not be accommodated through cannula, endobag can be used for retrieval of tissue.

Adhesion or other pathologic processes such as endometriosis can be treated simultaneously during removal of ectopic pregnancy without significantly prolonging the operation. In one week the beta hcg should return to baseline i.e. undetectable or very low. 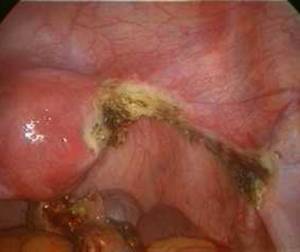 If the pregnancy is interstitial it may be associated with traumatic rupture, hemorrhagic shock and there is two fold increase in maternal mortality over other tubal pregnancies. Delayed diagnosis and increased vascularity of this are make laparoscopic procedure difficult. 2 to 4% of ectopic are interstitial. The anatomy of this ectopic accommodates the growing gestation accounting for its late recognition. The traditional management is better in these case i.e. Salpingectomy with or without corneal resection and in some difficult cases hysterectomy may be necessary. Interstitial pregnancy can be suspected at the time of laparoscopy when large and asymmetrical uterus is seen.

Most patients are discharged within 48 hours. There is a higher fertility rate/intra-uterine pregnancy rate in subsequent pregnancies with laparoscopic techniques. 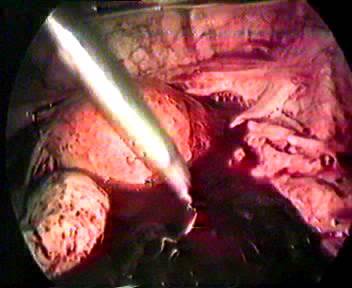 Laparoscopic surgery is a good option for rupture ectopic and ruptured ectopic does not necessarily warrant a laparotomy. If the patient is hemodynamically stable and initial laparoscopic examination indicates a moderate blood loss, it may be possible to control bleeding laparoscopically and perform any indicated procedures. If the patient is in stage II or stage III shock who has a large hemoperitoneum, laparotomy is the better choice. Managing ruptured ectopic pregnancies involves examining the pelvis, localizing the ectopic, aspirating blood and clots, localizing and controlling the bleeding points, and performing either salpingectomy or in rare situations, an oophorectomy is performed concurrently.

Controlling bleeding is the most critical part of the procedure, and several methods can be attempted sequentially to achieve haemostasis:

After successfully managing the ectopic pregnancy laparoscopically, the patient can be discharged second day. The patient should come again for a serum ft-hCG one week postoperatively to ascertain resolution of the ectopic gestation. The ft-hCG level should be either undetectable or very low after one week of surgery. If it is above 20 mIU/mL, a repeat blood test is ordered one to 2 weeks later when the ft-hCG should be undetectable.