Peritoneal adhesion is a common cause of bowel obstruction, pelvic pain and infertility. Proper technique of adhesiolysis is important and operating surgeons should have clear concept of mechanism of adhesion formation.

Normal fibrinolytic activity prevents fibrinous attachments for 72 to 96 hours after surgery and mesothelial repair occurs within 5 days of trauma. Within these 5 days a single cell layer of new peritoneum covers the injured raw area, replacing fibrinous exudates. However, if fibrinous activity of the peritoneum is suppressed, fibroblast will migrate, proliferate and form fibrous adhesion. Collagen is deposited and neovasular formation starts.

The most important factors which suppress fibrinolytic activity and promote adhesion formation are:

Position of the Surgical Team

Before starting diagnostic laparoscopy a best guess is made about the quadrant in which adhesion is more likely to be found. The surgeon should stand opposite to this quadrant to allow direct view into this quadrant. If the pathology is more likely in pelvic cavity the surgeon stands on left side of the patient. The first assistant, whose main task is to position the video camera, is also on the patient's left side. The instrument trolley is placed on the patient's left, allowing the scrub nurse to assist with placing the appropriate instruments in the operating ports. Television monitors are positioned on either side of the top end of the operating table at a suitable height for surgeon, anesthetists, as well as assistant to see the procedure.

For adhesiolysis of gynaecological purposes, generally one optical port in umbilicus and two 5 mm port in left and right iliac fossa should be introduced according to base ball diamond concept after visualizing the target of dissection. Port should be in a position to provide elevation angle of 30 degree and manipulation angle of 60 degree, which is ergonomically better. Some gynaecologist use suprapubic port, with suprapubic port, elevation angle of instrument and tubal structure is 90 degree and hence lifting up of ovary and tube may be difficult without grasping it.

A three-port approach should be used if there is any difficulty in manipulation with two ports especially in case of extensive adhesion.

A 30° telescope is employed in most instances, as this facilitates easier inspection of the deeper peritoneal cavity and abdominal organs. The secondary ports are inserted under laparoscopic vision. The selected site on the abdominal wall is identified by finger indentation of the parietal peritoneum.

The open technique for trocar insertion is recommended if extensive adhesion is suspected. At the time of laparoscopic adhesiolysis, surgeon should try to be very gentle with the tubal structure and bowel so that re-adhesion will not form and stricture of tube will not occur.

Viewing of lateral pelvic organs is helped by the manipulation of mobile structure with a solid port introduced through the left iliac fossa port. 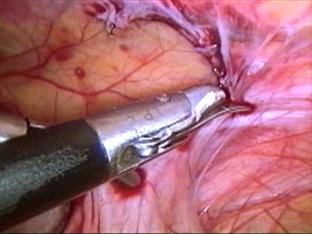 Animal studies have proved that laparoscopy leads to less adhesion formation compared to open surgery. The less adhesion formation after laparoscopic surgery is because retraction is not used much, packing of the abdominal cavity is not required that can damage peritoneum. In laparoscopic surgery there is less chance of drying of tissue because inside environment is cut off from outside. The foreign bodies like glove talk and lint. Also, the excellent visualization and magnification result into less tissue injury and adhesion. In laparoscopy, port wound and wound at the target of dissection is far away from each other so the chances of adhesion are less to the peritoneum because, for adhesion both the layer which tends to adhered should be in contact. At least three ports should be used to perform laparoscopic adhesiolysis. After access and introduction of telescope two other ports should be introduced according to baseball diamond concept keeping in mind the centre of adhesion as target of dissection. 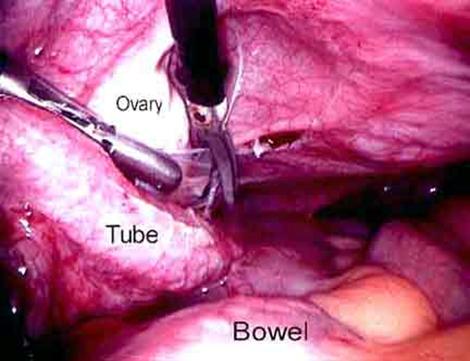 Figure:Sharp dissection with scissors if bowel is involved

If the adhesion is thin and avascular, it is easily lysed and the chances of recurrence are not much. In contrast if adhesion is thick and highly vascular it is difficult to separate. Theses adhesion requires use of energy (Ultrasonic dissector, Unipolar or Bipolar). After achieving haemostasis sharp dissection with scissors are necessary.

An atraumatic grasper is introduced to hold the adhesion or involved organ. It should be stretched gently and boundaries of adhesion are identified. An avascular area is choose with the close-up magnified view of telescope. The opposite trocar on the side of the surgeon is used for scissors and adhesion should be cut close to the affected organ. Vascular adhesions should be coagulated using electrosurgical instrument preferably, bipolar. Scissors should be used only if flimsy avascular adhesion is found. Thick vascular adhesion first should be tried with blunt dissection, otherwise must be coagulated before being cut. Suction irrigation instrument is good if blunt dissection is thought. 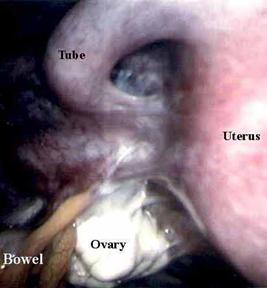 Bowel injury is common during enterolysis and patient who have a history of previous laparotomy should undergo a bowel preparation. If Injury, results enterorrhaphy can be accomplished with a one layer closure using Vicryl. Details of intracorporeal suturing can be found in chapter of laparoscopic suturing and knotting.

After adhesiolysis some fluid can be left inside to prevent recurrence. Steroids and antihistamines were tried but are used infrequent because of adverse effect delayed wound healing and high risk of dehiscence.

High molecular weight dextran was tried to prevent re-adhesion because it is absorbed over a period of 7 to 10 day. Its osmotic effect draws the fluid into the peritoneal cavity and so the mobile peritoneal organ floats reducing adherence between intraperitoneal organs. Although study in animals has demonstrated reduced postoperative adhesion, it is not fully confirm for its efficacy.