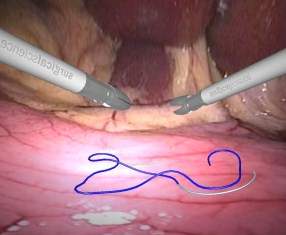 Endoscopic surgery is speedily being a well-known option to traditional procedures for variety of diseases and many of these procedures may need the employment of Laparoscopic suturing. Laparoscopic ligation and suturing can be used for approximation of tissues and it is also an effective way of delivering hemostasis. The adaptation of tissue and suturing for hemostasis and reformation of anatomic components has been considered probably the most demanding of endoscopic technical skills. Endoscopic procedures are performed by taking a look at a 2 dimensional TV screen with as many as 6 times magnification, eliminating depth perception and the tactile feeling of the tissues; this involves significant hand - eye coordination. The state-of-the-art endoscopic procedures demand the laparoscopic surgeon to master suturing. Each and every surgeon performing laparoscopic procedures ought to be extensively acquainted with basic principles of knotting and suturing.

In context with laparoscopic surgery the knots are categorized as

These are tied within your body cavities utilizing needle holders. The various knots used in Endoscopic practice are:

An ideal stitch is a which supports the tissue edges as well as correct tension and resists reverse slippage.

All of the three stages are essential along with a knot is secure only if it is tied correctly, drawn (shaped) to adapt to the anatomy of the knot and locked tightly. As Clifford Ashely wrote ‘a knot is never nearly right; it is either exactly right or is hopelessly wrong’.

The perfect characteristics of the surgical knot are:

It ought to be quick also it should simple to tie

The essentials that ought to be followed while intracorporeal knotting are listed below:

External or extracorporeal slip knots are used in endoscopic surgery for:

In all these situations, the knot is tied and drawn outside the body after which ‘slipped down’ with a knot pusher towards the intended target after which stiffened by traction on the standing up part against the knot pusher.

The following rules should be followed for safe ligature for slip knots in endoscopic surgery are:

In endoscopic surgical practice there is a large variation in choice of suture materials amongst individual surgeons. The overall preferences which exist in today’s practice are listed below:

Surgical needles are penetrating devices which are designed to pass sutures through tissues with minimum trauma. Objective of surgical needles

The advantages of using straight needle in endoscopic surgery are:

Tendency to swivel require more experience. Most often we make use of a 25mm and a half circle needle for endosuturing.

This combined needle was developed specifically for laparoscopic use within order to combine the positive attributes of the curved needle in terms of needle passage through tissues with the ease of handling of straight needles. The dynamic suturing component is basically a tapered ½ circle. This is then a passive straight shaft (body) that is 1.5 times the length of the curved section.

When placing stitch, either for tissue plane or cut edge re-approximation, the inclusion or exclusion of particular tissue layers (Figure 2.6) plays an important role in the recovery process and restoration of normal physiology.

The entire process of acquiring the correct suture depth in endoscopic surgery is technically challenging and involves four variables:

If adjustment of the needle is needed, this can be done in 3 ways:

Pulling on the needle is restricted towards the initial extraction of the suture, thereafter the needle is dropped and also the thread is pulled apart by grasping it using either the assisting instrument or using the active needle driver. The two handed pull entails the sequential use of the assisting grasper and active needle holder and is probably the most ef?cient method but requires experience and coordination.

The most important component for endosuturing is a needle holder. The need for ideal kind of laparoscopic suturing instruments to facilitate ?uent choreographed two handed movements essential for effective tissue approximation resulted in the introduction of Coaxial handles. A coaxial stem-to-handle relationship allows for the higher maneuverability and rotation essential for laparoscopic suturing. This straight line relationship reduces the complexity of movement coordination which makes it more ergonomic. A cylindrically shaped handle design permits a smooth 360 degrees rotation from the instrument. Another important feature which makes it possible for internal half knotting in areas of complicated access is for the finish of 1 of the needle drivers to be coaxially curved. The Szabo-Berci Needle driver sets and the Cuschieri needle sets utilizes this function.

Options that come with Tyco Gun and Cartridge

Echelon The innovation that resulted is a multiple-squeeze method for the cutting and stapling, which required careful focus on user feedback to really make it intuitive. Other improvements include increases in ef?ciency, intuitiveness and overall surgeon satisfaction.

Has 6 rows of staples.

Avoid excessive use of gun.