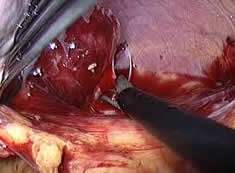 Laparoscopic splenectomy over the last decade has been accepted as the gold standard for indications like Idiopathic Thrombocytopenic Purpura and has been prolonged to larger and complicated spleens faced by surgeons in a variety of hematological and non-hematological disorders. ITP may be the most common indication for laparoscopic splenectomy. Hereditary spherocytosis, thrombotic thrombocytopenic purpura and others hematological problems adhere to. Hodgkin’s and non-Hodgkin’s lymphomas,and chronic lymphocytic leukemia, usually are reported frequently in literature, performed to manage the complications of hypersplenism, debulk illness, and enhance response to chemotherapy or for symptomatic splenomegaly. Patients with non-Hodgkin’s lymphoma almost never need setting up. Patients along with Hodgkin’s condition who've diffuse illness may all obtain chemotherapy. Likewise, sufferers with limited illness are usually treated with radiotherapy. A few patients with stage II disease will need surgical staging, that ought to be performed laparoscopically and you will be a sign for splenectomy. Literature evaluation reveals that laparoscopic splenectomy can be done in patients when splenectomy is indicated. Contraindications are proportional to surgeon’s experience and expertise. Complete contraindications towards the laparoscopic strategy include severe cardiopulmonary disease and other co-morbid conditions making laparoscopic as well as open splenectomy impossible to do. Relative contraindications may include big spleens, trauma, website hypertension, aneurysms of splenic pedicle, pregnancy, previous abdominal surgical treatment as well as couple of other people. Massive spleens greater than 4000 gm have been tackled laparoscopically, though Terrosu et al8 report higher incidence of conversion, bleeding and morbidity in spleens greater than 2000 gm. Experienced surgeons have reported an effective laparoscopic splenectomy for trauma. Hashizume et al have reported 42 successful splenectomies in the event of cirrhosis with portal hypertension. LS in pregnancy and aneurysms happen to be reported. Upper abdominal surgery that were a relative contraindication continues to be circumvented through the open technique. Significant obesity isn't a contraindication. On the other hand, the actual post-surgical consequences of open up surgery in obese patients often merit the additional laparoscopic effort in these patients. Tha harsh truth that the surgeon needs to understand here's “one ought to know the limitations and transform as soon as possible.”

Though all indications given in standard textbooks of surgery happen to be conquered by laparoscopy, the reported frequent indications are:

Use of high end energy sourse is essential for splenectomy and Harmonic Shears is probably the best advance in the practice of laparoscopic and even open surgery. The blades from the working instrument oscillate at 55,000 cycles per second generating local heat in between blades. This induces coagulation of proteins and works well for cutting of tissues and vessels being dissected. Lateral thermal spread is restricted to less than 2 mm, allowing the use of the instrument in difficult areas like the space between the gastric fundus and also the spleen. One should be cautious however in using this device to seal vessels over 4 mm. Another precaution to become kept in mind that the vessels sealed with this instrument shouldn't be handled because they often open and bleed. The harmonic shears offers certainly decreased operative time and has lessened blood loss during surgery.

The use of staplers in open surgery continues to be popular. The same has now been extended to laparoscopy. Intestinal in addition to vascular endoscopic staplers can be found and can supply in number of indications. During laparoscopic splenectomy, the pedicle might be transected en bloc, with a single application of a 3-cm vascular linear laparoscopic stapler. Complications such as bleeding occur, but they are mostly because of inappropriate technique. Massively enlarged spleens are heavy and hard to manipulate by thin and nimble laparoscopic instruments. Handport is an adjustable unit that fits the incision and prevents gas leaks during manipulation, and at rest. Incision is usually necessary for delivery because these are difficult to devote bags. Morcellation can also be contraindicated. Alternatively, whenever a counter-incision for intact elimination of an bigger spleen is predicted, keeping the incision could be planned to facilitate surgery with the “hand-assisted” technique. Having the hands inside of the abdomen provides the all important touch perception, helps retraction and dissection, charge of bleed in necessity and retrieval from the specimen and it is a suggested procedure of choice in splenomegaly. Pfannenstiel incision is less painful than conventional subcostal incision and is the most well-liked incision in hand assisted laparoscopic splenectomy. Ligasure also imparts precise amount of bipolar energy and pressure to tissue achieving permanent seal. These devices can and it has been used not only to seal smaller vessels but also the primary splenic pedicle with success. Tagaya N et al have reported three successful laparoscopic splenectomies utilizing a 2 mm telescope. They used three 2 mm ports for telescope and instruments and something 12 mm port for retrieval. Use of robotics, though in the infancy in surgical applications are also successfully applied in laparoscopic splenectomy by Chapman et al. Preoperative embolization from the splenic artery was advocated in large spleens to diminish blood loss during surgery and operative time.This method has its own complications and has been abandoned by most authors.

In elective situations, all patients should receive polyvalent pneumococcal and Haemophilus influenza type B vaccinations 2 -3 weeks before surgery. Blood and blood goods are essential in taking care of unexpected complications.

Position and approach all the placements - supine, lateral and angled have been described. The first literature describes supine position for laparoscopic splenectomy. Lateral and angled positions are preferred today. Surgeons who use endostaplers for pedicle transection appear to prefer lateral position. The angled or the partial right lateral position is amenable to urgent conversion to laparotomy if severe hemorrhage occurs and is our preferred position.

Within the anterolateral approach, effect of position and gravity after the dissection from the gastrocolic ligament retracts the viscera and exposes the pancreatic tail and also the splenic pedicle. There's immediate access towards the splenic artery and vein. The splenic artery could be ligated at the start of the procedure. Early ligation is supposed to slow up the size and decrease loss of blood during surgery. The splenophrenic ligament may be the last to become tackled. Despite the 6% incidence of benign pancreatic reaction and a slightly higher risk of pancreatic injury (9.5%), we're feeling how the procedure does not handle the spleen around in posterior approach and in event of transformation, it's easier to tackle the spleen within the same position. Accessory spleens will also be easy to consider when searching for this method. Hence, this is the preferred approach in literature.

The posterior technique was described by Gagner et al. In this approach, the spleen is retracted medially after dividing the splenophrenic and splenorenal ligaments. The pancreatic tail is visualized and so may be the splenic pedicle. The approach is reported to possess a lesser incidence of pancreatic complications and bleeding.This method requires experience with retroperitoneal laparoscopic dissection technique unfamiliar to an average laparoscopic surgeon since many are been trained in open splenectomy by transabdominal technique.

Co2 insufflation is done utilizing a Veress needle at umbilicus or open technique at preplanned port site and maintained at 12 mm Hg to 14 mm Hg.

The success story to any laparoscopic procedure is based on precise port placement. Though books mention ports related to fixed anatomical landmarks, we're feeling how the port placement be planned after examining the inflated abdomen and the splenic size. The Indian abdomen differs from those of patient from West. The primary objective of port placements should be to tackle the splenic pedthe actualicle easily. The writer normally advocates 4 ports.