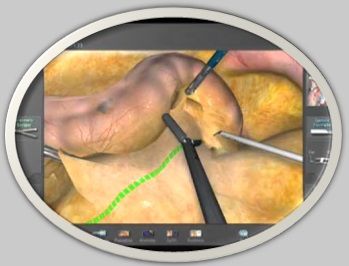 Laparoscopy is a surgery that uses a thin, lighted tube put through a cut (incision) in the belly to look at the abdominal organs or the female pelvic organ. Laparoscopy is used to find problems such as cysts, adhesion, firoids , and infection. Tissue samples can be taken for biopsythrough the tube (laparoscope). In many cases laparoscopy can be done instead of laparotomy surgery that uses a larger incision in the belly. Laparoscopy can be less stressful and may have less problems and lower costs than laparotomy for minor surgeries. It can often be done without needing to stay overnight in the hospital.

Laparoscopy is done to:

Laparoscopic sigmoidectomies have been shown to ameliorate patient recovery compared with the open approach. Attempts to decrease parietal trauma and improve the cosmetic results of laparoscopic sigmoidectomy have illustrated the patient’s satisfaction with these approaches . Recent research and clinical application of either natural orifice transluminal endoscopic surgery (NOTES) or hybrid NOTES (MA-NOS) for sigmoidectomy have demonstrated their feasibility, although difficulties need to be overcome before wider clinical application. While NOTES is still embyronic, transumbilical single incision laparoscopic surgery (SILS) has made its initial forays into clinical minimally invasive surgery.

For the past 2 years, numerous reports of transumbilical SILS application have been published showing the feasibility of this approach including for complex procedures such as living kidney donor’s procurement.

While laparoscopic sigmoidectomies are favoured by patients because of a better cosmetic result; they have been shown to ameliorate patient recovery compared with open approach. Recent research and clinical application of either NOTES or hybrid NOTES (MA-NOS) for sigmoidectomy have shown their feasibility, but there are difficulties to be overcome. None of these experiences was achieved without transparietal access and the only clinical attempt used three transabdominal ports. In this way, transumbilical SILSmay be less invasive and spares healthy structures, such as the vagina, thus avoiding possible collateral morbidity.

Over the past 2 years, numerous reports of transumbilical SILS application have been published showing the feasibility of this approach for even complex urological, gynecological and visceral procedures. Recently, Single port access right hemicolectomy has been described by different groups. While the first description of single port access right hemicolectomy used a transparietal sling suture for exposition, the adjunction of multiport trocar and angulated instruments by the Cleveland group showed the feasibility of this procedure avoiding reversion to transparietal stitches outside the umbilicus.

In the present experience of transumbilical SILS sigmoidectomy the use of articulated instruments in combination with standard strait laparoscopic instrument showed its feasibility without the need for a transparietal sling suture. This represents important progress compared with the previous report of single port access colectomy with transparietal sling suture, as the risk of tissue tears by stitches could not be neglected Transumbilical SILS sigmoidectomy and colectomy can be performed using standard straight laparoscopic instruments, especially haemostatic device, which represents a safety concern. Finally compared with hybrid NOTES, i.e. the MA-NOS approach, SILS sigmoidectomy seems less traumatic with comparable cosmetic results and is feasible in male patients. Future development and clinical availability of multiport single access will facilitate SILS, especially for complex procedures such as colectomies. This may facilitate intracorporeal anastomosis performance and specimen extraction in a bag, which may be of importance for cancer cases.

While these developed techniques for scarless colectomies either through SILS or NOTES, concern should focus on patient safety with these new surgical approaches. In this regard, SILS sigmoidectomy according to the present technique is safer, but may represent a step towards NOTES sigmoidectomy.

Diverticulitis is a common digestive disease particularly found in the large intestine. Diverticulitis develops from diverticulosis, which involves the formation of pouches (diverticula) on the outside of the colon. Diverticulitis results if one of these diverticula becomes inflamed. Patients often present with the classic triad of left lower quadrant pain, fever, and leukocytosis (an elevation of the white cells count in blood tests). Patients may also complain of nausea or diarrhea; others may be constipated. Less commonly, an individual with diverticulitis may present with right-sided abdominal pain This may be due to the less prevalent right-sided diverticula or a very redundant sigmoid colon. Some patients report bleeding from the rectum.

The development of colonic diverticulum is thought to be a result of raised intraluminal colonic pressures. The sigmoid colon has the smallest diameter of any portion of the colon, and therefore the portion which would be expected to have the highest intraluminal pressure. The claim that a lack of dietary fiber, particularly non-soluble fiber (also known in older parlance as "roughage") predisposes individuals to diverticular disease was long accepted within the medical literature. However, the first study to specifically test the theory has found that "A high-fiber diet and increased frequency of bowel movements are associated with greater, rather than lower, prevalence of diverticulosis."

Progress in laparoscopy has resulted in its wide use in dealing with a broad spectrum of surgical diseases in both complicated elective and emergency settings. Surgical treatment of complicated colonic diverticular disease is still debatable, especially in relation to elderly patients with concurrent medical diseases.

The advent of laparoscopic techniques for colorectal surgery in 1991 seemed to increase indications for early resection. However, the laparoscopic technique is not widely practiced among surgeons, particularly for diverticulitis complicated by fistula or generalized purulent peritonitis (Hinchey III). The existence of fecal peritonitis (Hinchey IV) is unanimously considered a contraindication to laparoscopy, even though some surgeons used to perform a 2-stage laparoscopic procedure to treat early presentation of fecal peritonitis. Multicenter studies have confirmed that laparoscopic resection for diverticulitis can be performed without additional morbidity in cases with Hinchey type I and with reduced hospital stay in patients with Hinchey type I or II.