Obstetrician and Gynecologist
Member of World Association of Laparoscopic Surgeons

First established treatment for women with polycystic ovary syndrome (PCOS) was surgical ovarian wedge resection but was largely abandoned due to the risk of post surgical adhesions and the introduction of medical ovulation induction with clomiphene and gonadotrophins. However, women with PCOS who are treated with gonadotrophins often have an over-production of follicles which may result in ovarian hyperstimulation syndrome (OHSS) and multiple pregnancies. Moreover, gonadotrophins, though effective, are costly and time-consuming requiring intensive monitoring.  Laparoscopic ovarian 'drilling' (LOD) may avoid or reduce the need for gonadotrophins or may facilitate their usefulness. The procedure can be done on an outpatient basis with less trauma and fewer postoperative adhesions than with traditional surgical approaches. Many uncontrolled observational studies have claimed that ovarian drilling is followed, at least temporarily, by a high rate of spontaneous ovulation and conception or that subsequent medical ovulation induction becomes easier.

To evaluate the effectiveness and safety of laparoscopic ovarian drilling compared with ovulation induction for clomiphene-resistant PCOS.

The pathology of polycystic ovarian disease (PCOD) was described by Stein and Leventhal. in 1935. It is characterised by infertility, oligomenorrhoea or amenorrhoea, hirsutism, acne, and bilaterally enlarged, cystic ovaries. The syndrome affects 4-9% of women of childbearing age.2 Infertility due to chronic anovulation is the most common reason for women seeking counselling or treatment. . Many treatment protocols, surgical and medical have been recommended to control polycystic ovary syndrome The drug of first choice for inducing ovulation is clomiphene citrate, taken orally, although 20% of women given clomiphene citrate fail to ovulate. Ovulation induction with gonadotrophins is well established in patients resistant to clomiphene citrate, but extensive monitoring is necessary because of the high sensitivity of polycystic ovaries to exogenous gonadotrophins, with the risk of multiple follicle development leading to termination of the cycle, ovarian hyperstimulation syndrome, or multiple pregnancy. Laparoscopic drilling of the ovaries is an alternative treatment for patients with clomiphene citrate resistant polycystic ovary syndrome. This involves a single procedure, which has minimal morbidity, which can lead to consecutive ovulations with minimal risks of multiple pregnancy.5 Patients may also respond to clomiphene citrate after this treatment.6 7. Disadvantages are the need for surgery under general anaesthesia, the unknown long term effects on ovarian function, and possible adhesion formation. Patients who fail to ovulate after laparoscopic ovarian drilling and clomiphene citrate can still be treated with gonadotrophins, before proceeding to the costly and burdensome procedure of in vitro fertilisation and embryo transfer. Whether gonadotrophins or laparoscopic ovarian drilling should be the first treatment of choice in patients with clomiphene citrate resistant polycystic ovary syndrome is still debatable.

Hyperandrogenic state manifested with high serum levels of testosterone, androstenedione, and dehydroepiandrosterone sulfate. High levels of luteinizing hormone (LH) leading to increased stimulation of the ovarian theca cells. In turn, these cells increase the production of androgens (e.g., testosterone, androstenedione). Lower level of follicle stimulating hormone (FSH), which lead to inability of the ovarian granulosa cells to aromatize the androgens to estrogens, leading to decreased estrogen (Estradiol) levels and consequently anovulation. The more important from diagnostic point of view is the high LH/FSH ratio; higher than 2. Hyperinsulinemia: There is high levels of insulin like growth factor 1 (IGF-1) which increase insulin resistance that in turn lead to high insulin levels (hyperinsulinemia). The latter causes dyslipidemia and elevated levels of plasminogen activator inhibitor (PAI-1) in patients with PCOD. Elevated PAI-1 levels constitute a risk factor for intravascular thrombosis.

Polycystic ovaries are enlarged bilaterally and have a smooth-thickened capsule that is avascular. On cut section, subcapsular follicles in various stages of atresia are seen in the peripheral part of the ovary. The most striking feature of the PCOD ovary is the hyperplasia of the theca stromal cells surrounding arrested follicles. On microscopic examination, luteinized theca cells are seen.

Clinical manifestations of the disease include the following: menstrual disorders (80%), oligo-menorrhea (71.4%), amenorrhea (28.6%), infertility (74%) (Accounts for 30% of overall infertility), recurrent pregnancy losses (common), hirsutism (69%), obesity (49%), acne vulgaris and some may be asymptomatic. Untreated polycystic ovary syndrome may be regarded as a disorder that progresses until the time of menopause. According to the ongoing studies women with this syndrome are at an increased risk of cardiovascular disease. Other long-term effects of polycystic ovary syndrome are related to the clinical consequences of persistent anovulation. These include infertility, menstrual irregularities ranging from amenorrhea to dysfunctional uterine bleeding, hirsutism and acne. 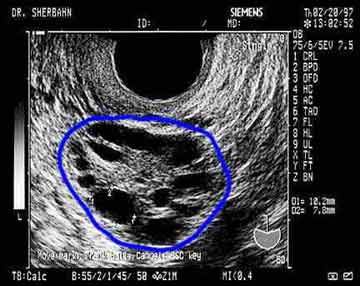 Blue circle is around the ovary

Increased size of ovaries, more than 9CC, with peripherally oriented cystic structures (more than 8) and each is less than 9mm in diameter with no dominant follicles seen. However; the ultrasonic picture alone is not enough for the diagnosis of PCOD as this picture was seen in normal women with (Polycystic appearing ovaries) (Lotfi 1991) 9.

LDiet control to alleviate hyperinsulinemia and weigh control is very crucial for the treatment. They benefit from a low-calorie diet for weight reduction. Start with decreasing the intake of carbohydrates and fat in every meal. Keep encouraging them that the loss of weight is not going to be dramatic. >Encourage moderate physical activity in these patients provided they have no contraindications to vigorous physical activity.

It is given 50mg twice daily starting on the second day of the menstrual cycle and given for 5 days. The treatment cycle should be monitored by ultrasonic folliculometry and hormonal assays, so as to know whether ovulation is induced or not. Before addressing failure of treatment, we should know is it failure to get ovulation or failure to get pregnancy. If it is failure to get ovulation we shift to Gonadotropin treatment. If it is failure to get pregnancy (and we did had good ovulation, we address the case as unexplained infertility for which we either do Controlled Ovarian Hyperstimulation (COH) with or without Intrauterine insemination (IUI) and if failed we shift to In Vitro Fertilization (IVF).

As long as hyperinsulinemia is associated with higher levels of androgen and lower diameters of follicles, the addition of insulin sensitizers is highly recommended. Metformin (Glucophage) is a major drug used in obese patients with type 2 diabetes. It is given by mouth 500 mg three times daily after meals. It was found that in a study done by (Nestler et al., 1998) 10 when Metformin was given to obese anovulatory women, high rate of ovulation occurred compared to placebo. The same happened if the metformin was added to CC, leading to reduction of nuisance follicles, reduced estradiol on day of Human chorionic gonadotropin injection , reduced rate of ovarian hyperstimulation and reduced rate of abortion. 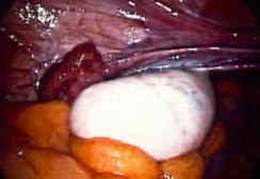 The numerous small cysts are just under the outer capsule

The laparoscopic approach uses several small (1/2 to 1 centimeter) incisions instead of a large abdominal incision, and avoids inpatient hospitalization. Several techniques have been described including: multiple small ("punch") biopsies of the ovarian surface (Sumioki, 1988) 11, the use of a needle point electrode with electrical energy (Gjonnaess, 1984) 12 or a laser beam (Daniell, 1989) 13 to burn holes in the ovaries (drilling), or actually removing one ovary (Kaaijk, 1999) 14. Others have described using a vaginal ultrasound to guide a needle through the vagina into the small follicles on the surface of the ovary and draining the fluid (Myo, 1991) 15. The most popular of these techniques is ovarian drilling. 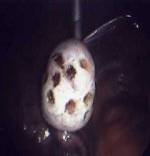 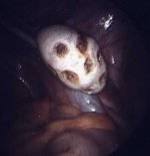 The technique of ovarian drilling is to destroy (cauterize) the testosterone producing tissue of the ovary. Usually the small follicles visible on the surface of the ovary are chosen as the spots to direct the electrical or laser energy, because presumably this is where hormone production is maximal. From 4-20 "holes" can be made in each ovary, usually 3 millimeters wide and 3 millimeters deep (see figure 1). Treatment of both ovaries is usually preformed, but reports that treatment of only one ovary can be successful have been published. Many physicians try to make the areas of cautery as far away from the fallopian tube as possible to try to limit the chance of tubal scarring. Others will wrap the ovaries with dissolvable materials that inhibit scar formation. Despite these efforts, adhesions around the tubes and ovaries can occur, but tend to be milder than with the classic BOWR, and do not appear to effect pregnancy rates (Naether, 1993; Greenblatt, 1993) 16 17 . Rarely the ovaries can undergo irreparable damage and cease to function (atrophy) (Dabirashrafi, 1989).18.

Laparoscopy is performed under general anesthesia with endotracheal intubation. 10 mm Storz laparoscope, is introduced subumblically. Grasping the ovarian ligament by atraumatic forceps 5 mm introduced through the contralateral port of the ovary then moved to the front of the uterus or towards the anterior abdominal wall to prevent injury of other plevic organs. An insulated puncture needle introduced through the epsilateral port and six to ten puncture points were made through the ovarian capsule in the antimesenteric surface using electrocautery. The same procedure was applied to the other ovary. A monoplar electrocautery current at a 30-W power is used for 4 seconds. Each punctare is about 4 mm in diameter and 6-8 mm in depth. No coagnlation was done within 10 m m of the hilum to avoid bleeding or permanent reduction of the ovarian supply.

To keep a record of menstrual cycle. If the patient started a menstrual period within 6 weeks of the surgery, a blood sample is taken on day 2 of that cycle for measurement of serum concentrations of LH, FSH, testosterone, androstenedione and SHBG. Another blood sample is taken on day 21 of the same cycle for measurement of serum concentration of progesterone. Ovulation is diagnosed when the progesterone level was 30 nmol/l. If spontaneous menstruation did not occur, a random blood sample is taken to measure all the above hormones at 6 weeks following surgery. If the patient does not ovulate as evidenced by the low progesterone levels or lack of menstruation, CC would be started 6–8 weeks after surgery. If ovulation was achieved either spontaneously or with the help of CC, patients are followed-up until they conceive or for up to 12 months after LOD.

Ovarian drilling strategy was a powerful tool and effective alone for inducing ovulation in patients with clomiphene citrate resistant polycystic ovary syndrome Treatment with clomiphene citrate remains first line treatment for polycystic syndrome. Laparoscopic ovarian drilling should be the second line treatment for those with clomiphene resistant disease. Bipolar electrocautery allows control of the energy source and has an autostop function and results in discrete, reproducible punctures, with low risk of adhesion formation. The high pregnancy rate after the addition of clomiphene citrate and recombinant follicle stimulating hormone suggests that postoperative adhesion formation is not an important problem. Disadvantages of the electrocautery strategy are the potential risks from surgery carried out under general anaesthesia. Because ovulation induction with gonadotrophins is a non-invasive procedure it does represent a safer alternative. The major difference between the two strategies is that multiple pregnancies can largely be prevented by treating women with laparoscopic ovarian drilling. This study is another step towards reducing multiple pregnancies while maintaining good pregnancy rates.