Ovaries are the almond shaped organs in female located one on them either side of the uterus. Once a month, during menstrual period in female, a follicle forms on ovary. A follicle is often a fluid filled sac which contains an egg. Commonly a follicle release mature egg from a ovary (ovulation). In some instances, when the follicle doesn't rupture and release an egg, the fluid stays from the follicle and forms a cyst. This is what's called an ovarian cyst. An ovarian cyst may be benign tumour. A typical benign tumour that appears with an ovary is a dermoid cyst and ovarian cysts were the fourth most common gynecologic cause of hospital admissions according to a late 1980s study by Grimes and Hughes. During minimal access surgery, a noncancerous cyst that is causing symptoms can be removed (cystectomy), leaving the ovary intact. In some cases, the entire ovary or both ovaries are removed, particularly when ovary is destroyed or cancer is found. 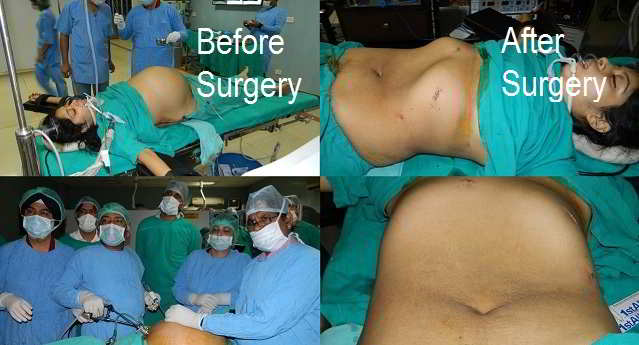 Ovarian Cystectomy is often a minimal access surgical excision associated with an ovarian cyst. Cysts on ovaries are small fluid-filled sacs that develop on the ovaries. Individuals with cysts on ovaries often do not experience any although some people might women may feel pressure, swelling, pain within the abdomen, pain during sex and abnormal or unusually painful periods.

The persistent huge ovarian cysts are most likely to be surgically managed by open surgery by salpingo oohphorectomy. The standard minimal access surgical approach to presumptively benign ovarian cysts is the laparoscopic ovarian cystectomy. Indeed, small benign ovarian cyst is one of the most common procedures performed by the practicing gynecologist.

In common practice most commonly encounter 3 types of benign ovarian cysts are.

Risks of Laparoscopic ovarian surgery not properly done by inexperienced surgeon include the following:

Mucinous cystadenomas of the ovary are known most commonly for their potential to grow to massive proportions and are often incidentally diagnosed. They are typically benign tumors accounting for 15% of ovarian neoplasms and up to 80% of all mucinous tumors. Management of ovarian cysts depends on the patient's age, the size and structure of the cyst, menopausal status and desire of baby. Surgical management of cysts is by laparotomic or laparoscopic cyst excision or cystectomy with oophorectomy depinding upon the experience of surgeon.

A laparoscopic cystectomy most of the time removes only the cyst leaving the normal functional ovaries intact. However, if the ovarian cyst is too large or connected to ovarian tissue, surgeon has to removes all or part of the ovary. Laparoscopy provide minimal access surgical exploration of the abdomen to examine the organs of the abdomen. Female suffering will be administered general anaesthesia and a single, small cut is made through the abdominal wall. Then the abdominal muscles are separated to reach ovary with the trocar site. In some cases the blood vessels supplying the ovary are clamped and tied off. Then the cyst is removed. Alternatively, samples of tissues may be removed for further analysis. If the cyst is cancerous, the surgeon may need to take out the affected ovary. The abdominal muscles are sewed and the incision is closed with stitches. 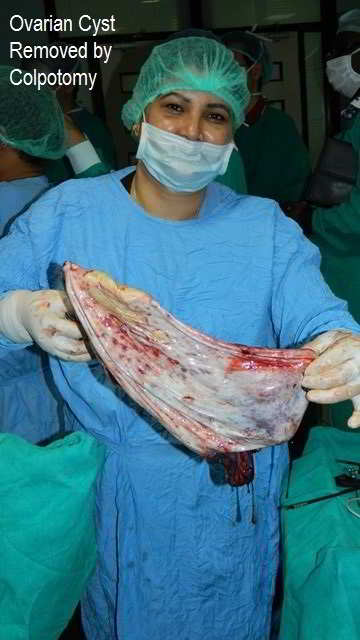 The specific complications associated with laparoscopic ovarian cyst removal in inexperienced hand include need for removal of one or both ovaries, injury to the surrounding organs, damage to the fallopian tube/s, damage to womb, and infection.

Even though a laparoscopy is sometimes called 'keyhole surgery', it is still an surgical operation and therefore there is a chance that something could go wrong if the surgeon is not experienced. A common complication is injury to ovary, injury to fallopian tube and an infection that might develop at the incision sites. Another potential problem with a laparoscopic cystectomy is possible damage to the bladder, bowel or blood vessels from inserting the scope.