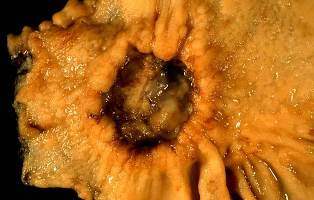 Gastric cancer continues to be among the top 10 causes of cancer-related fatalities with regard to both men and women. Radical surgical resection of the tumor may be the just expect cure during these patients. Officially, the very first laparoscopic-assisted distal gastrectomy with a Billroth II gastrojejunostomy was carried out through Goh et al in 1992, for the treating a complicated peptic ulcer. The very first laparoscopic gastrectomy, having a Billroth II reconstruction, for cancer was carried out by Kitano et al in 1992 and published in 1994. Subsequently, several authors have reported successful laparoscopic subtotal or total gastrectomy, demonstrating the key postoperative benefits of this process.

The recommended treatment of distal gastric cancer includes a radical resection of the distal 4/5 of the stomach with a free margin of 5 to 6 cm.The extent of the associated lymph node dissection is still debated. Japanese authors suggest a long dissection using the routine involvement of D1 and D2 lymph nodes, while an even wider dissection is actually recommended in cases associated with suspected invasion regarding more distant lymph nodes. Western authors often prefer a limited dissection due to the fact from the higher operative mortality and morbidity rates associated with extended lymphadenectomy, even when distal pancreatectomy will be avoided, as well as the lack of a significantly improved long-term success facts. Previously decade, laparoscopic techniques have gained wide clinical acceptance in operative practice. This approach offers important advantages in comparison with open surgery: reduced intraoperative loss of blood, decreased postoperative pain and accelerated recovery, earlier go back to normal bowel function with earlier resumption of oral intake, early discharge through hospital, and lower financial costs. The same advantages happen to be reported after laparoscopic subtotal or even complete gastrectomy with regard to harmless tumors in addition to early gastric cancers. However, laparoscopically assisted subtotal gastrectomy for distal gastric cancer can only end up being justified as well as widely recognized as a safer alternative to open surgery if equivalent long-term results are obtained. This would suggest an equivalent radical oncologic resection.

The procedure is completed under general anesthesia along with endotracheal intubation and epidural analgesia. The patient lies on the table in the supine placement, with legs apart and also 20° head-up tilt. The surgeon are operating in the “French” position with the camera assistant on their left. CO2 pneumoperitoneum is induced following insertion from the first 10/12-mm cannula at the level of the umbilicus, with a open technique. The abdomen and also the peritoneal cavity tend to be looked over to rule out adjacent organ invasion and peritoneal seeding. Three other trocars are inserted with the abdominal wall, one out of the left higher quadrant, one out of the best upper quadrant and one in the midline, just beneath the xyphoid process. At this time, intraoperative laparoscopic ultrasonography is completed to scan the liver surface and assess the presence of deep liver metastases.

This gastrocolic ligament is divided while using ultrasonic scissors along the border from the transverse colon, hence including the greater omentum in the specimen to become resected. The dissection is continued right toward the pylorus to incorporate the group of infra-pyloric lymph nodes. The best gastroepiploic vessels are divided flush along with anterior surface of the pancreas, coagulated and divided by the harmonic scissors to prevent inadvertent compromise of lymph nodes. The lymph nodes across the pancreatoduodenal artery can also be removed at this stage. The Kocher maneuver is accomplished, allowing dissection of the retropancreatic nodes.

The first part from the duodenum is dissected as well as transected having a 35- or 45-mm capsule endostapler. The lymph nodes of the hepatoduodenal ligament are dissected and removed en bloc. To complete the dissection, a cholecystectomy is conducted and the aspects of the hepatic pedicle are carefully isolated and encircled with umbilical tapes. Gentle traction on these structures facilitates and expedites the dissection of nodes. The right gastric artery is divided using the ultrasonically activated scissors at its origin in the common hepatic artery. The lymph node dissection is continued to the left along the common hepatic artery, celiac axis, left gastric artery and proximal splenic artery. Left over oozing after lymph node dissection both across the anterior aspect of the pancreas and the lesser omentum is best controlled by argon plasma coagulation. The left gastric vessels are best approached from below following gentle cephalad traction about the stomach using the greater omentum folded on the anterior facet of the stomach The vessels are carefully prepared and separately divided.

The dissection of the gastrocolic ligament is continued toward the spleen; the left gastroepiploic artery is divided either using the harmonic scissors or even the endostapler; only the first 2 short gastric vessels are divided using harmonic scissors. Before stomach transection, the cardiac nodes are dissected en bloc: the best cardiac nodes are approached continuing the line of dissection of lymph nodes across the left gastric artery. Left cardiac nodes aren't necessarily dissected for cancer from the distal third from the stomach. When dissected, cephalad traction about the stomach and anterior truncal vagotomy ease the removal of lymphatic tissue. The transection of the stomach and resection of the distal 4/5 from the organ are accomplished by multiple endostapler uses.

A 50-cm transmesocolic Roux-en-Y loop is prepared and anastomosed side-to-side to the posterior wall of the gastric stump with a single or double using endostapler. Interrupted intracorporeal sutures close the access opening on the jejunal limb and also the gastric stump. A side-to-side jejunojejunal anastomosis in the foot of the Roux-en-Y loop is fashioned by further endostapler application and, finally, the access opening about the jejunal limbs is sutured.

The Billroth II reconstruction is performed similarly: a transmesocolic, isoperistaltic side-to-side gastrojejunal anastomosis on the posterior gastric wall is actually designed through single or double endostapler application, far away of 30 cm from the ligament of Trietz. The entry opening about the gastric stump and also the jejunum is then closed with interrupted 2-0 or 3-0 vicryl sutures. The specimen, inserted right into a retrieval bag, is withdrawn with the large-bore cannula.

Despite these encouraging results, at the moment, numerous doubts still remain concerning the ability, throughout the video-assisted laparoscopic procedure, to fulfill all the oncologic criteria met during conventional, open surgery in gastric cancer patients. In 1999, Shirasihi et al reported a number of 40 laparoscopic assisted Billroth gastrectomies as well as lymphadenectomies for early cancer of the antrum as well as gasrtric body, without any postoperative morbidity and mortality with no recurrence in a mean follow-up of 21 months. Additionally, Kitano et al didn't observe variations in terms of curability, at a mean follow-up of 21.5 months, in their prospective and randomized series. In 2003, Weber et al published the outcomes of their comparative study from a series of 12 patients affected having a gastric cancer and treated with a laparoscopic gastrectomy, along with a series of 13 matched open controls. They did not observe differences between the groups in terms of stage of disease, radical resection, extent of lymphadenectomy, and 18-month survival rates.

As far as we know, this is actually the first prospective and also randomized trial comparing 5-year outcomes of subtotal gastrectomy performed for distal gastric cancer along with laparoscopic and open approaches. Patients’ characteristics were similar, as demonstrated by the insufficient differences in demographics, ASA status, pTNM stage, size, and grading from the tumor. A radical resection was performed in both groups of patients. All specimens were measured at the conclusion of operations, showing a similar length of resection at the level of both lesser as well as higher gastric curvatures. Free margins of resection were at 5-6 cm from the tumor in most patients, as indicated to ensure a low rate of anastomotic recurrence. The suggest quantity of resected lymph nodes had been similar both in groups.

Thus, the laparoscopic approach didn't limit the feasibility of the oncologically correct resection of the gastric tumor and extended lymphadenectomy. Moreover, 5-year overall and free-disease survival rates weren't influenced by the surgical approach, confirming the radicality of the laparoscopic resection. As in other laparoscopic procedures, there's important operative and postoperative advantages in LG patients: lower intraoperative loss of blood, previously resumption of oral intake, and also earlier discharge from hospital. These results provide a clear response to our initial question: in experienced hands, laparoscopic-assisted subtotal gastrectomy for distal gastric cancer is a feasible and safe option to open, standard gastric resection, with similar short- and long-term results that testify towards the oncologic radicality from the procedure. However, laparoscopic gastric surgery is demanding from a technical point of view, especially when a D2 lymphadenectomy is conducted. Adequate learning laparoscopic techniques and types of procedures is mandatory just before embarking on a laparoscopic gastrectomy.