Laparoscopic cholecystectomy is now the gold standard for the treatment of symptomatic gallstone disease. It is most commonly performed Minimal Access Surgery by General surgeon's world wide. In Europe and America 98% of all the cholecystectomy is performed by laparoscopy.

Apart from routine pre-operative investigations, in fit patients, the only investigations needed are ultrasound examination, although practiced in some centers; intravenous Cholangiography may not be confirmative and is attended with the risk of anaphylactic reactions.

The general anaesthesia and the pneumoperitoneum required as part of the laparoscopic procedure do increase the risk in certain groups of patients. Most surgeons would not recommend laparoscopy in those with pre-existing disease conditions. Patients with severe cardiac diseases and COPD should not be considered a good candidate for laparoscopy. The laparoscopic cholecystectomy may also be more difficult in patients who have had previous upper abdominal surgery. The elderly may also be at increased risk for complications with general anaesthesia combined with pneumoperitoneum.

Patient is operated in the supine position with a steep head-up and left tilt once the pneumoperitoneum has been established.

The surgeon stands on the left side of the patient with the scrub nurse-camera holder-assistant. One assistant stand right to the patient and he will hold the fundus grasping forceps. 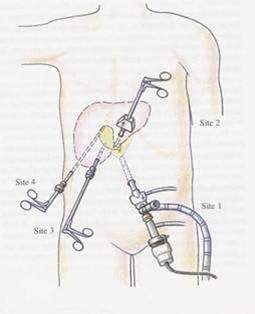 Four ports are used: optical (10mm), one 5mm and one 10mm operating, and one 5.0mm assisting port. The optical port is at or near the umbilicus and routinely a 30� laparoscope is used. Some surgeon who has started laparoscopy earlier they are more comfortable with 0 degree telescope.

First view of gallbladder after insertion of telescope

Once all the four ports are in position the fundus of the gallbladder is grasped by the assistant and flipped upwards and over the superior edge of the right lobe of liver.

Any adhesion should be cleared from the gallladder. Sharp dissection may be carried out with the help of scissors attached with monopolar current. At the time of separating adhesion surgeon should try to be as near as possible towards gallbladder. The cystic pedicle is a triangular fold of peritoneum containing the cystic duct and artery, the cystic node and a variable amount of fat. It has a superior and an inferior leaf which are continuous over the anterior edge formed by the cystic duct. An important consideration is the frequent anomalies of the structures contained between the two leaves (15 -20%). The normal configuration is for an anterior cystic duct with the cystic artery situated postero-superiorly and arising from the right hepatic artery usually behind the common bile duct.

The separation of the cystic duct anteriorly from the cystic artery behind can be performed by a Maryland's grasper by gently opening the jaw of Maryland between the duct and artery. The opening of the jaw of Maryland dissector should be in the line of duct never at right angle to avoid injury of artery behind. Sufficient length of the cystic duct and artery on the gallbladder side should be mobilised so that three clips can be applied.

The dissection of the cystic pedicle is completed by placement of a clip to occlude the cystic duct at its junction with the gallbladder.

In many institutions routine operative cholangiogram is performed. Routine cholangiogram decreases the risk of CBD injury in case of difficult anatomy. The opening in the cystic duct in made on the antero-superior aspect. Correct alignment of the cystic duct and infusion of saline facilitates insertion of ureteric catheter to perform cholangiography. Insertion is difficult if the opening in the cystic duct is made too close to the gallbladder. The contrast medium should be injected slowly during screening and the patient should be in a slight trendelenberg position with the table rotated slightly to the right. It is essential that the entire biliary tract is outlined. Surgeon should ligate or clip cystic duct when you are sure up to the point of absolute certainness.

Although the majority of surgeons opt for clipping the cystic duct, before dividing it, this technique though quick is intrinsically unsound as internalisation of the metal clip inside the common bile duct over the ensuing months is well documented. There is report of internalization of clip and subsequent stone formation after many years. The internalised clip becomes covered with calcium bilirubinate pigment. For this reason, to tie the cystic duct using a catgut Roeder external slip knot should be done.

Dissection of Gallbladder from Liver Bed

One should be careful at the time of dissection and if there is spillage of stone each stone should be removed from the peritoneal cavity to avoid abscess formation in future. 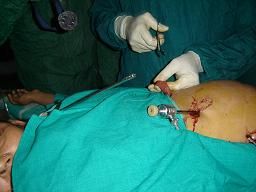 Some time big stones will not allow easy passage of gallbladder and in these situation ovum forceps should be inserted inside the lumen of gallbladder through the incision of its neck and all the stone should be crushed. 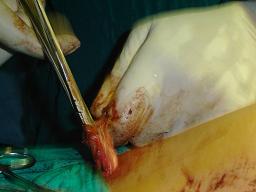 "Revert to open if unsure about Anatomy"

Incidence of Iatrogenic CBD injury is 0.12% and 0.55% during open and laparoscopic cholecystectomy respectively

Common cause of CBD injury:

Snap interpretation will be wrong if there is:

In case of bleeding

How to avoid injury?

Tenting of the CBD should always kept in mind at the time of dissection to avoid injury.

Test your knowledge with laparoscopic quiz