Minimal access surgery represents a rapidly increasing component of gynaecological surgery [1, 2]. Surgical competence entails a combination of knowledge, technical skills, decision making, communication skills, and leadership skills [3, 4]. Of these, dexterity or technical proficiency is considered to be of paramount importance among surgical trainees. Surgical proficiency must therefore be acquired in less time, with the risk that some surgeons may not be sufficiently skilled at the completion of training. The benefits of laparoscopic surgery in terms of lower morbidity, shorter hospital stay and quicker recovery times are well established. On the other hand, a common criticism of laparoscopic surgery is that it is time consuming and complex.  This has been associated with significant under-reporting of complications and deaths following laparoscopic surgery.

Laparoscopic surgery requires specific skills in hand–eye co-ordination and due to the lack of manual contact with the tissue and the restricted instrument mobility, the need for specific training was obvious It has been shown that complication rates decreases sharply as more laparoscopic procedures are performed. Similarly the operation time is longer during the learning phase and decreases with experience. Formal training courses using graded exercises on pelvic simulators and exercises on animal models have been offered. This allows the basic skills required for laparoscopic surgery to be acquired before using them in a clinical set-up and so provides an avenue where by the learning curve may be partially circumvented. This kind of training is accepted as useful and even necessary. Therefore the current training programmes need to be assessed to ascertain their efficacy and establish their optimal content.

The skill development of trainees also needs to be monitored. This particular experiment prospectively investigated the effect of training on the speed and quality of endoscopic knot tying trainees in obstetrics and gynecology and studied inter- and intra-operator differences according to previous laparoscopic experience and according to several personal characteristics [1, 9, 11].

The effect of training on endoscopic knot tying was investigated in obstetrics and gynecology and surgery trainees. All trainees participated on a voluntary basis. During the observation period they performed 100 identical knots in 3–4 training sessions of 2 h over a period of four weeks. During this period they were not exposed to any other additional training in endoscopic surgery, except clinical activities. Using an endotrainer (Ethicon, Cincinnati, USA) with a fixed camera, a 5 mm needleholder, and 5 mm forceps (Ethicon), a series of 10 knots were performed with Dexon® threads, 13 cm in length, which had been fixed to a flat 10310 red rubber surface. Prior to the study a video was shown demonstrating the technique of tying, two-turn, flat, square knot. During the study trainees were allowed to rewatch the video demonstration, and an instructor was present during all training sessions in order to give advice if required.

Proficiency-based training in laparoscopic suturing and knot tying translates to the operating room. Medical students with no previous laparoscopic or simulator experience were enrolled in an IRB-approved randomized controlled trial. All subjects trained to proficiency on a previously validated suturing model (Fundamentals of Laparoscopic Surgery video trainer). Subjects were then randomized to a control group, which received no additional training, and an ongoing training group, which trained again to proficiency at 1 and 3 months (immediately after testing). Simulator testing was repeated at 2 weeks, 1 month, 3 months, and 6 months after initial training. No subject had interval operative experience [1,12].

Simulator defined a task environment with sufficient realism to serve a desired purpose [13]. Novices underwent structured training of basic skills training on the Minimally  Invasive Surgical Trainer simulator (Mentice AB, Gothenburg, Sweden) followed by knot tying training on the LapSim simulator (Surgical Science, Gothenburg, Sweden). They were assessed pre- and post-training on a video trainer which consists of an electromagnetic field generator and two sensors that are attached to the dorsum of the surgeon’s hands at standardized positions [3, 14]. The advanced Dundee endoscopic psychomotor trainer (ADEPT) was originally designed as a tool for the selection of trainees for endoscopic surgery, based on the ability of psychomotor tests to predict innate ability to perform relevant tasks. Studies have shown the validity and reliability of the trainer Optical motion tracking systems consist of infrared cameras surrounded by infrared light emitting diodes. 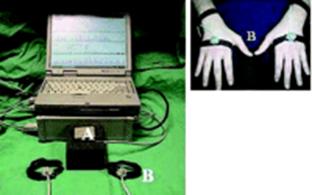 A: signal generator B: sensors

Basic surgical skills: surgical residents attended the BSSC leiden and Eindhoven, the Netherlands before and after the course participant performed on the xitract LS500, featuring standardized laparoscopic cholecystectomy clip and cut task fig:3 [15].

Box trainers: training involves the use of box trainers with either innate models or animal tissues; it lacks objective assessment of skill acquisition. Virtual reality simulators have the ability to teach laparoscopic psychomotor skills, and objective assessment is now possible using dexterity-based and video analysis systems [9, 16].

Regarding the duration of knot tying, an obvious learning curve was obtained. The mean time required to tie a knot decreased for the first 10 to the last 10 knots respectively was slightly higher, the calculated last duration was slightly lower, and the time to tie a knot continued to decrease slowly. For the quality of endoscopic intracorporeal knots, a learning curve was also seen: whereas the tie times decreased, the quality of the knots increased (Figure 4); from 2.0 6 0.4 for the first 10 knots to 2.2 6 0.97 SD for the last 10 knots). Final knot scores were higher for more experienced (P5 0.01) and more practically orientated trainees, practising handicrafts (P5 0.05).

All participants completed a correct knot as compared with only 25% before training. Time to completion was 66% faster and knot quality 45% better after training. Significant reduction in number of movements (P = .006) and distance traveled (P < .000) by both hands after training [18]. Trained group performed significantly better than the control group at post testing confirming curriculum effectiveness. Training on the bench model simulators were higher among subjects who received hands-on training, irrespective of model fidelity [8, 17, 18]. No significant deference for the parameters time and score outcome pre and post BSSC.

This study was undertaken to demonstrate the effect of training on the speed and quality of knot tying. Training of knot tying was efficient and the learning curves of all trainees were remarkably similar, which is considerably faster than generally accepted. These data are indicative of the minimum necessary time trainees should be provided with to achieve this particular skill. As expected more experienced trainees were clearly characterized by lower initial tie times, as well as slightly lower final tie times. The effect of previous experience was, however, limited compared with the overall effect of the actual training. The observation that more experienced trainees were characterized by lower initial and persistently lower final tie times, whereas their speed of learning was slightly lower suggests other differences between these two groups, such as long term and cumulative effects of training. To explain this, our knowledge of the neurophysiology of learning and memory is not yet sufficient of learning take months, rather than hours, as it is common sense that in sports, e.g. tennis, beginners make dramatic improvements in a few days, although it takes much more time and practice to become skilled. The fundamental issues of training in endoscopy, however, are not speed but quality of surgery and prevention of accidents.

The assumption was that the sequential training up to a plateau of all different tasks of endoscopic surgery could be advantageous in comparison with the current apprenticeship model, where trainees start by watching and assisting surgery, then perform minor surgical interventions and gradually proceed to more extensive laparoscopic procedures. If, however, the training effect of watching and assisting surgery is limited, this observation should impact upon training program of residents. It might be that video endoscopy of pure diagnostic procedures only trains depth of vision cues, not eye–hand co-ordination. . The former emphasizes hours of training with simple procedures up to a certain speed and quality, whereas the latter emphasizes difficulty by performing multiple tasks from the begi. It is assumed that adequate training can minimize the

complication rate because complications were particularly seen during the early part of the learning curve. It has been claimed that laparoscopic procedures could be safely introduced to young inexperienced residents provided they were having properly supervised training.