The hysteroscope is definitely a thin telescope-like device that appears just like a lighted tube. The current hysteroscope is really thin that it may fit with the cervix with only minimal or no dilation. Before placing the hysteroscope, a doctor administers an anesthetic. Once it has provided result, a doctor dilates the cervix slightly, after which positions the hysteroscope with the cervix to disclose the interior from the uterus. Ordinarily, the walls from the uterus are touching one another. To get a much better view, the uterus might be inflated with co2 gas or fluid. Hysteroscopy takes around half an hour. Treatment relating to the utilization of hysteroscopy is generally carried out like a short-stay hospital process with regional or general anesthesia. Very small surgical devices might be placed with the hysteroscope to get rid of polyps or fibroids. A little sample of tissue lining the uterus is usually taken out for evaluation, specifically patient has suffered any irregular bleeding. 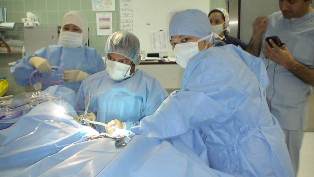 Diagnostic hysteroscopy may be used to help figure out the reason for infertility, dysfunctional uterine bleeding, and repetitive miscarriages. Additionally, it may help locate polyps and fibroids, in addition to intrauterine devices (IUDs). The process is also accustomed to investigate and treat gynecological problems, frequently done rather than or perhaps in addition to carrying out a dilation and curettage (D&C). A D&C is really a surgical treatment that stretches the cervical canal (dilation) so the lining from the uterus could be scraped (curettage). A D&C may be used to have a sample from the lining of the uterus for analysis. However, hysteroscopy has benefits on the D&C since the physician may take tissue examples of particular areas and view any fibroids, polyps, or structural irregularities. Additionally, small fibroids and polyps might be taken off through the hysteroscope, thus staying away from more invasive and challenging open surgery. This method can also be accustomed to remove IUDs that are presently baked into the wall from the uterus.

There isn't any research open to show that hysteroscopy is conducted pretty much usually on any subset from the female population.

When the procedure is conducted under normal anesthesia, the individual must have absolutely nothing to eat or drink after midnight the night time prior to the process. Routine diagnostic tests might be ordered when the process is conducted inside a hospital. Occasionally, a gentle sedative is given to assist the individual relax. The individual is requested to empty her bladder. She's then put into position and also the vagina is cleansed. Generally, an area anesthetic is administered round the cervix; even though a regional anesthetic that obstructs nerves attached to the pelvic region or perhaps a general anesthetic are usually necessary for many patients.

Morbidity and mortality rates: The speed of problems during diagnostic hysteroscopy is extremely low, about 0.01%. Surgical hysteroscopy is assigned to a greater quantity of problems. Perforation from the uterus happens in 0.8% of methods and excess bleeding in 1.2-3.5% of cases. Death due to hysteroscopy happens for a rate of 2.4 per 100,000 procedures carried out.

The exam is generally carried out with a gynecologist, a physician who focuses on other locations of women's overall health, pregnancy, labor and childbirth, and prenatal testing. Nursing staff helps with providing education, positioning the individual, and specimen collection. Diagnostic hysteroscopy is conducted either in a physician's office or hospital. Uterine size and possibilities diagnosis and complication of treatment figure out the setting.

Diagnostic hysteroscopy hardly ever causes problems. The main risk is infection. Long term bleeding may consume a surgical hysteroscopy to get rid of a rise. Another problem is perforation from the uterus, bowel, or bladder, brought on by over-forceful advancement from the hysteroscope. An infrequent but dangerous problem is enhanced fluid absorption in the uterus to the bloodstream. Monitoring the quantity of fluid utilized throughout the process could reduce this problem. Surgery under typical anesthesia poses the extra risks typically related to this kind of anesthesia. The process is not carried out on women with severe pelvic inflammatory disease (PID) because of the potential of exacerbating the problem. Hysteroscopy ought to be planned after menstrual bleeding is finished and before ovulation to prevent a possible interruption of the new pregnancy.

Patients should inform their doctor if, following the hysteroscopy, they create the following symptoms:

Normal hysteroscopy discloses a proper uterus without any fibroids or other growths. Irregular results consist of uterine fibroids, polyps, or perhaps a septum. Sometimes, precancerous or cancerous growths are found.

It is perfectly normal to see light bleeding for 1 to 2 days after surgical hysteroscopy. Gentle cramping or pain is typical after operative hysteroscopy, but generally decreases within 8 hours. If co2 gas was adopted, the resulting soreness generally subsides within Twenty four hours.

A laparoscope enables a patient to visualize the exterior from the uterus or execute a surgical treatment about the pelvic organs. Laparoscopy and hysteroscopy are occasionally carried out at the same time to maximize their diagnostic abilities.