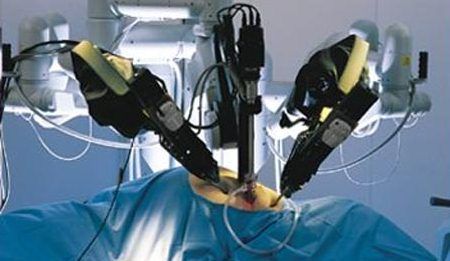 The word "robot " was coined through the Czech playright Karel Capek in 1921 in the play Rossom's Universal Robots. The word "robot" is in the check word robota which means forced labor. The very first non-laparoscopic robot was the Puma 560, usedby to perform neurosurgical biopsies with greater precision in 1985. Three years later, Davies et al performed a transurethral resection using the same machine. This system coded in the PROBOT, a robotic system specifically designed for transurethral resection. Next, ROBODOC was developed by Integreated Surgical Supplies of Sacramento, CA that was made to move the femur during hip replacement surgeries. This became the first robot approved by the FDA.

Ever since then, robots allow us from primitive machines that could perform a variety of menial tasks to today where they can perform very complex tasks. Robots are utilized in computers, in research, and in manufacturing. Robots only have recently entered the medicine. Industrial robots are actually employed for a variety of surgical techniques, are FDA approved, and are marketed.

A variety of commercial companies happen to be developed to produce surgical robotic systems for the general community. Computer Motion, Inc. developed the AESOP® Endoscope Positioner: a voice-activated robotic system for endoscopic surgery. In 1993, this had become the first robot approved by the FDA for surgery. The HERMES® Control Center was also developed by Computer Motion, Inc. and brought a centralized voice command and recognition sytem to the robotic medical devices. Integrated Surgical Systems (now Intuitive Surgery, Inc.) redesigned the SRI Green Telepresence Surgery system and created the da Vinci Surgical System® classified as a master-slave surgical system. It uses true 3-D visualization and EndoWrist®. It had been approved by FDA in July 2000 for general laparoscopic surgery, in November 2002 for mitral valve repair surgery, and it is presently involved in a cardiac clinical trial in the usa for totally endoscopic heart bypass graft surgery. There are over 210 da Vinci Systems being used through the United States, Europe and Japan.

In 2001, SOCRATES™ Robotic Telecollaboration System was made by Computer Motion, Inc.. It offers integrated telecommunication equipment combined with the robotic devices in order to provide remote surgical telecollaboration. This technique was used for the first-ever transatlantic telesurgery performed.

Many more robots and robot instruments and programs are being researched and coded in america and round the world. Having a competitive healthcare market in the usa, having cutting edge equipment, the newest technologies, and also the newest testing modalities are important towards the success from the organization. Robotics in medicine is a reasonably new, yet advancing field

August 1989 - A high-tech medical device company Computer Motion was founded with a goal to revolutionize surgical practices and also to improve patient lives.

December 1993 - The AesopTM 1000, a robotic system used for holding an endoscopic camera in minimal invasive laparoscopic surgery, produced by computer motion was approved by the FDA.

June1998 - Dr. Frank Diamiano performed the first procedure in the usa having a reanastomosis of a fallopian tube while using Zeus system.

July 11, 2000 - Intuitive Surgical Inc. received clearance from the FDA to market the da Vinci¨ Surgical System in the United States to be used in laparoscopic surgical procedures.

October 9, 2001 - ZEUS® Robotic Surgical System from Computer Motion receives FDA regulatory clearance using the FDA decision for U.S. surgeons to use a number of instruments to carry out a number of robotically assisted laparoscopic and thoracic procedures.

August 2001 - The CyberKnife® became the first image-guided robotic technology to get FDA clearance for non-invasive cancer surgery to provide radio-surgery for lesions any place in your body when radiation treatment is indicated.

September 7, 2001 - ZEUS robotic system produced by Computer Motion was adopted in the trans-Atlantic operation. A doctor in Ny removed the diseased gallbladder of the 68-year-old patient in Strasbourg, France.

October 1, 2001 - FDA cleared the marketing from the CyberKnife with Dynamic Tracking Software (DTS) developed by Accuray Incorporated to supply radiosurgery for lesions, tumors, and conditions any place in your body when radiation treatment is indicated.

July 7, 2004 - FDA cleared the marketing of the robotic-like system to assist in coronary artery by-pass surgery enabling the surgeon to do heart surgery while seated at a console with a computer and video monitor.

Apr 9, 2005 - Surgeons in the University of Illinois Clinic at Chicago successfully performed a laparoscopic right hepatectomy, removing approximately 60 percent of her liver, and also the tumor using the da Vinci¨ Surgical System.