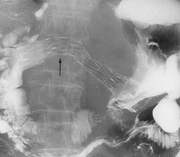 The stomach is located mainly in the left upper quadrant beneath the diaphragm and is attached superiorly to the esophagus and distally to the duodenum. The stomach is divided into 4 portions, the cardia, the body, the antrum, and the pylorus. Inflammation, scarring, or infiltration of the antrum and pylorus are associated with the development of Gastric Outlet Obstruction (GOO).

The duodenum begins immediately beyond the pylorus and mostly is a retroperitoneal structure, wrapping around the head of the pancreas. The duodenum classically is divided into 4 portions. It is intimately related to the gallbladder, liver, and pancreas; therefore, a malignant process of any adjacent structure may cause outlet obstruction due to extrinsic compression.

PUD manifests in approximately 5% of all patients with GOO. Ulcers within the pyloric channel and first portion of the duodenum usually are responsible for outlet obstruction. Obstruction can occur in an acute setting secondary to acute inflammation and edema or, more commonly, in a chronic setting secondary to scarring and fibrosis. Helicobacter pylori has been implicated as a frequent associated finding in patients with GOO, but its exact incidence has not been defined precisely.

Intrinsic or extrinsic obstruction of the pyloric channel or duodenum is the usual pathophysiology of GOO; as previously noted, the mechanism of obstruction depends upon the underlying etiology. Patients present with intermittent symptoms that progress until obstruction is complete. Vomiting is the cardinal symptom. Initially, patients may demonstrate better tolerance to liquids than solid food. In a later stage, patients may develop significant weight loss due to poor caloric intake. Malnutrition is a late sign, but it may be very profound in patients with concomitant malignancy. In the acute or chronic phase of obstruction, continuous vomiting may lead to dehydration and electrolyte abnormalities.

When obstruction persists, patients may develop significant and progressive gastric dilatation. The stomach eventually loses its contractility. Undigested food accumulates and may represent a constant risk for aspiration pneumonia.

Nausea and vomiting are the cardinal symptoms of GOO. Vomiting usually is described as nonbilious, and it characteristically contains undigested food particles. In the early stages of obstruction, vomiting may be intermittent and usually occurs within 1 hour of a meal. Early satiety and epigastric fullness are common. Weight loss is frequent when the condition approaches chronicity and is most significant in patients with malignant disease. Physical examination often demonstrates the presence of chronic dehydration and malnutrition. A dilated stomach may be appreciated as a tympanic mass in the epigastric area and/or left upper quadrant.

Upper endoscopy can help visualize the gastric outlet and may provide a tissue diagnosis when the obstruction is intraluminal. The sodium chloride load test is a traditional clinical nonimaging study that may be helpful. The traditional sodium chloride load test is performed by infusing 750 cc of sodium chloride solution into the stomach via a nasogastric tube (NGT). A diagnosis of GOO is made if more than 400 cc remain in the stomach after 30 minutes. Nuclear gastric emptying studies measure the passage of orally administered radionuclide over time. Unfortunately, both the nuclear test and saline load test may produce abnormal results in functional states. Barium upper GI studies are very helpful because they can delineate the gastric silhouette and demonstrate the site of obstruction. An enlarged stomach with a narrowing of the pyloric channel or first portion of the duodenum helps differentiate GOO from gastroparesis.

The specific cause may be identified as an ulcer mass or intrinsic tumor. In the presence of PUD, perform endoscopic biopsy to rule out the presence of malignancy. Dehydration and electrolyte abnormalities can be demonstrated by routine laboratory examinations. Increases in BUN and creatinine are late features of dehydration. Prolonged vomiting causes loss of hydrochloric (HCl) acid and produces an increase of bicarbonate in the plasma to compensate for the lost chloride and sodium. The result is a hypokalemic hypochloremic metabolic alkalosis. Alkalosis shifts the intracellular potassium to the extracellular compartment, and the serum potassium is increased factitiously. With continued vomiting, the renal excretion of potassium increases in order to preserve sodium. The adrenocortical response to hypovolemia intensifies the exchange of potassium for sodium at the distal tubule, with subsequent aggravation of the hypokalemia

Patients with GOO due to benign ulcer disease may be treated medically if results of imaging studies or endoscopy determine that acute inflammation and edema are the principle causes of the outlet obstruction (as opposed to scarring and fibrosis, which may be fixed). If medical therapy conducted for a reasonable period fails to alleviate the obstruction, then surgical intervention becomes appropriate. The choice of surgical procedure depends upon the patient’s particular circumstances.

Initial management of GOO should be the same regardless of the primary cause. After a diagnosis is made, admit patients for hydration and correction of electrolyte abnormalities. Remembering that the metabolic alkalosis of GOO responds to the administration of chloride is important; therefore, sodium chloride solution should be the initial IV fluid of choice. Potassium deficits are corrected after repletion of volume status, and after the chloride has been replaced.

Place a NG tube to decompress the stomach. Occasionally, a large tube is required because the undigested food blocks tubes with small diameters. When acute PUD has been identified as a primary cause of GOO, focus treatment on reduction of acid production. Histamine 2 (H2) blockers and proton pump inhibitors comprise the mainstay of treatment. Treat H pylori infection, when identified, according to current recommendations. Although most patients improve temporarily with treatment, scarring and fibrosis may worsen over time. These patients are likely to present with recurrent GOO. More than 75% of patients presenting with GOO eventually require surgical intervention (Doberneck, 1987).

All patients are subjected to a standard operative evaluation. Correct fluid and electrolyte abnormalities prior to surgery. Perform decompression by NGT and suction and alert the anesthesiologist to the potential risk for aspiration upon induction. Perform a preoperative nutritional evaluation and initiate appropriate nutritional therapy (TPN or enteral feedings via a percutaneous jejunostomy placed distal to the obstruction) as soon as possible.

Surgical intervention usually provides definitive treatment for GOO, but it may result in its own comorbid consequences. Operative management should offer both relief of obstruction and correction of the acid problem. The most common surgical procedures performed for GOO related to PUD are vagotomy and antrectomy, vagotomy and pyloroplasty, truncal vagotomy and gastrojejunostomy, pyloroplasty, and laparoscopic variants of the afore mentioned procedures. Of these, vagotomy and antrectomy with Billroth II reconstruction (gastrojejunostomy) seems to offer the best results. Vagotomy and pyloroplasty and pyloroplasty alone, although used with some success, can be technically difficult to perform due to scarring at the gastric outlet. A combination of balloon dilatation and highly selective vagotomy has been described, but it is associated with gastroparesis and a high recurrence rate.

The role of the laparoscopic approach in the treatment of GOO is under investigation and may represent a valid form of therapy with low morbidity. The experience of several international centers has been published. One group in China performed laparoscopic truncal vagotomy and gastrojejunostomy for GOO related to PUD with nearly complete resolution of symptomatology. They reported no conversions to open procedure or mortalities. Twenty-seven percent of patients did experience transiently delayed gastric emptying, which resolved with conservative measures (Sin, 2004).

GOO by intractable chronic duodenal ulcer has been successfully treated with bilateral truncal Vagotomy and Stapled Gastrojejunostomy. A standard five port access is used Figure 02. The left lobe of liver is retracted using a fan retractor placed through subxiphoid port. The lesser sac is entered opening the lesser omentum in the pars flaccida, the avascular area located anterior to caudate lobe. Dissection is continued till muscular portion of right crus is exposed. Posterior Vagus nerve is identified by opening the phrenoesophageal membrane and transected with harmonic scissors. The anterior Vagus nerve is identified on the anterior aspect of lower esophagus. It is important to identify all the branches and lower esophagus cleared of any nerve fibres on both anterior and posterior aspects to ensure that any aberrant nerve of Grassi is not missed. A specimen of both the nerves should be sent for histological confirmation.

The Gastrojeunostomy must be performed on the greater curvature at the lowest part of antrum as close to pylorus as possible. The second loop of jejunum is identified and approximated to the body of stomach. Two small incisions are made in both stomach and jejunum to allow the endolinear cutter 65 to be introduced. Before firing the instrument the instrument is closed and rolled to ensure that the anastomosis is in a good position .The inner aspect is checked to look for bleeding or inappropriate stappling. The incisions are then closed using sutures or stapler.

Admit patients to a monitor unit after the procedure. Pay special attention to fluid and electrolyte status. Most surgeons agree that perioperative antibiotics are advisable but may be limited to use during the immediate perioperative period in the absence of intervening infection. If a gastric reconstruction is performed, an NGT is recommended. The length of time that the NGT should remain in place is controversial; however, remembering that a previously dilated stomach, the performance of a vagotomy, and the presence of metastatic cancer all may contribute to decreased gastric motility is important. An anatomically patent gastrojejunostomy may fail to empty for days. This syndrome of delayed gastric emptying is a well-known entity and requires surgical patience. Aggressive pulmonary toilet, deep venous thrombosis (DVT) prophylaxis, and early ambulation are advisable.

The indications for a laparoscopic vagotomy is permanent gastric acid reduction in patients who have idiosyncratic responses to the H-2 histamine antagonists or the protonpump inhibitors.

B. Patient Position and Room Setup

A highly selective superselective, parietal cell, or proximal gastric vagotomy is vagotomy of choice. It selectively deprives the parietal cell mass of vagal innervation and reduces the sensitivity of the parietal cells to stimulation and the release of acid. It does not require a drainage procedure.

The branches of the nerve of Latarjet are divided from the esophagogastric junction to the crow’s foot along the lesser curvature of the stomach.