There are numerous studies showing us how gastric bypass surgeries have improved the lives of those who suffer morbid or severe obesity. Patients who have underwent the procedure were able to lose about 50 to 60 percent of their weight a year after a surgery. Some would even report an astounding 80 percent weight loss after two years. About 140,000 gastric bypass surgeries are conducted every year. Obese teens could also undergo the medical procedure as long as they are within the guidelines set. Those who are qualified to undertake the surgery should at least be 100 pounds overweight and failed to reduce weight in the last six months through monitored weight loss programs. But every coin has two sides. Gastric bypass surgery also has its downside. Some patients would often report depression after the gastric bypass operation. Some of the patients would often pinpoint the procedure itself as depressing. While others think that it is the low-calorie diets triggering this depression. Gastric bypass patients are recommended to follow a special diet that would ensure them the best and sustained results. This special diet is about low-calorie, low-sugar and low-fat foods. The Thinner Times website, stated that about 5 to 10 percent of deaths occurred to patients after the gastric bypass surgery. This happens just within a month or two since the procedure and the primary cause would be psychological challenges. To address this, experts recommend that adequate supplies of calories should be ingested daily. 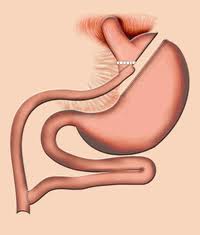 There are studies showing that those who suffer depression and anxiety after the gastric bypass surgery is less likely to lose weight compared with mentally healthy people. There are many methods on how doctors and experts would know if their patients are mentally prepared for the surgery. There are medical centers who would employ or require their patients to undergo rigorous metal health evaluation. A patient candidate for weight loss surgery is to undergo psychological evaluation to ensure that they are prepared mentally for the operation and the lifestyle changes that will follow after the surgery. If a person is found out to be suffering from depression prior to the surgery, they will not be automatically disqualified. Those who have history of drug and alcohol abuse are the ones who are disqualified. Some medical centers would require patients with depression go through treatment before gastric bypass surgery. Treatment could include taking of antidepressants, psychotherapy, and help from their family, friends and support groups. It is not uncommon to find weight loss surgery candidates to suffer from depression, since they would have to deal with being ostracized because of their weight. Candidates for weight loss surgery would oftentimes suffer from a history of depression, bipolar disorder, post-traumatic stress or panic/anxiety attacks. Having mental health problems are not preventing people from getting the treatment that they need to improve their lives and their health. Just like in any other surgery, it is important to gain support from friends and family to recover well and to get the desired results. Gastric bypass surgery would require a lot of change in lifestyle, it could be difficult but having loved ones will help a patient get through with it.

There are numerous benefits by getting a gastric bypass surgery. Those who have undergone the surgery were expected to lose about 50 to 60% of their weight. Most of the patients would say that they reached the lowest point of their weight two years after their surgery. In addition to weight loss, gastric bypass surgery could also resolve health issues associated to obesity. They could improve or lessen the risk of Type 2 diabetes, high blood pressure, high blood cholesterol, sleep apnea, asthma, arthritis, joint pain, and even heart disease and cancer. Those who have undergone gastric bypass surgical procedures are also exposed to risks and complications just like in any other surgery. When considering getting this kind of weight-loss procedure, it is not only the benefits that you would have to know but also its risks and dangers.

Women who went through the procedure are recommended to avoid pregnancy for at least two years after the surgery. Pregnant women are required to take nutritional supplements like vitamins and minerals to get the proper nutrients for her and the baby. Gastric bypass surgeries are not recommended for everybody. It is often recommended to those who have a BMI of 40 or those who weigh more than a hundred pounds. Everybody who would be undergoing the procedure would have to take a mental exam, for those who eat due to emotional problems are likely to fail in losing weight. Gastric bypass surgeries have 2% of fatalities, one percent due to complications and the other one percent would brought by the failure of the patients to follow the dietary restrictions following the surgery. Before undergoing the procedure, it is important to understand these consequences and be prepared to change our lifestyle.

Gastric Bypass: Is It Really Necessary?

Sometimes when we look at ourselves in the mirror, we don't like what we see. Our modern lifestyle does not exactly engender healthy living for normal people. The convenience of fast food combined with a sedentary lifestyle is not exactly conducive to a healthy life. Obesity is quickly becoming an epidemic in in terms of how it has spread. A lot of people are trying to be more fit, of course, with diet and exercise. However, sometimes, that's not enough. This is where a gastric bypass comes in. Having weight-loss surgery is quickly becoming an increasing trend among people who find that they just can't seem to lose weight. This might have come about because of a combination of lifestyle choices, genetic predispositions and physical problems, but the results are still the same: stubborn flab that doesn't seem to go away or even in some cases, incredibly overweight individuals. For people like these, a gastric bypasss is often their only hope. What exactly is a gastric bypass? This is a simple process in which stomach capacity is lessened and a large part of the intestinal tract is skipped in the digestive process. It may sound complicated but it is actually the simplest weight-loss surgery that is possible. There are actually several variations of gastric bypasses but the most common type is the Roux-en-Y gastric bypass. In this type of gastric bypass, a pouch is create at the top of the stomach using surgical staples – sometimes this pouch is as small as a walnut. Then the stomach pouch is connected to the middle part of the small intestine, the jejunum.

All of this can be done by either an open procedure, where in the whole abdomen is sliced open, or by making a small incision in the side of the abdomen and using small tools and a camera to do the procedure, a process that is sometimes called the laparoscopic approach. An open procedure can be actually very dangerous and is also subject to longer recovery times; this is why the laparoscopic approach is often advised. Of course, this is all a major surgical procedure and you can't just have your digestive tract messed with. You can only be qualified for this procedure if you have been obese for five years, in which you have tried everything to lose weight, are not alcoholic, and not suffering from any psychiatric disorder. An age limit is also set for procedure – only individuals from 18 to 65 may have a gastric bypass. It may all seem like a done deal: just hop onto the operating table and you'll be well on your way to svelteness. Unfortunately, it's not that easy. A gastric bypass is a four hour operation followed by a five day recovery period, in which the patient is observed. Liquids will be the only source of nourishment for him during the observation period. Afterwards, there will be a twelve week regimented diet that will take him from liquids to solids so that the patient's new stomach may handle it. There will also be side-effects: a smaller stomach means less food which means less energy overall – you'll be lethargic until your body learns to cope. Also, you may experience pain and vomiting after eating too much or too fast. A gastric bypass looks like a great shortcut to slimness but it's a lot more difficult than it may seem.

Gastric Bypass Surgery: How much does it Cost?

Are you considering gastric bypass surgery to get rid of excess weight? Perhaps, you are wondering how much the procedure would cost you and if it is covered by insurance.

Prepare to spend much to be able to lose weight. Nowadays, weight loss or bariatric surgery costs around $20,000 to $35,000. In fact, the cost of weight loss surgery has gone down significantly in the past years. It varies depending on the quality of procedure itself, the experience of the surgeon, the medical team that will help in the operation, and the additional post-surgery services that a patient availed of.

The following are the criteria that a weight loss surgery patient must meet to qualify for insurance coverage:

To be able to enjoy the insurance benefits, the patient (with the help of the surgeon or clinic) is required to file some forms to the insurance company. One of the necessary forms include a Letter of Medical Necessity that usually indicates the patient’s weight or body mass index, obesity-related diseases (e.g., diabetes, hypertension, etc.), and the duration of the patient’s obesity, among others. On the other hand, weight loss surgery patients who are not covered by insurance must shoulder the costs themselves. These self-pay patients may apply for personal loans to be able to pay for the surgery, but this payment option involves interest rates.

The cost of weight loss surgery must also include the expenses following the procedure. A change in lifestyle after the surgery results in certain expenses such as gym membership for the exercises and new sets of clothes, which will need to be replaced several times during the year. Besides the financial costs, there are emotional and physical costs involved as well in the weight loss surgery. For one, the patient will need to adjust to the new lifestyle and the changes in his body, which can trigger high levels of stress and anxiety especially in the few weeks following the surgery. The physical cost of gastric bypass surgery involves being committed to the recommended diet plan to avoid serious complications and weight gain. In particular, it means the patient must stay away from foods rich in fat and sugar, as well as avoid unhealthy habits such as skipping meals and overeating. Sticking to a regular exercise program is also part of the surgery’s physical cost.