Although hemorrhoids occur in everyone, they become large and cause problems in only 4% of the general population. Hemorrhoids that cause problems are found equally in men and women, and their prevalence peaks between 45 and 65 years of age.

What is stapled hemorrhoidectomy? 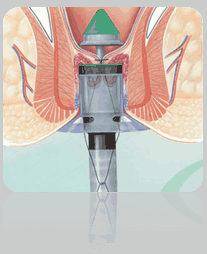 It is relatively new surgical technique for treating hemorrhoids, and it has rapidly become one of the treatment of choice for third-degree hemorrhoids. Stapled hemorrhoidectomy is a misnomer since the surgery does not remove the hemorrhoids but, rather, the abnormally lax and expanded hemorrhoidal supporting tissue that has allowed the hemorrhoids to prolapse downward. Once the blood supply of hemorrhoidal tissue is cut off it is cured and the prolapsed mucosa will be pulled up.

Stapler is placed through the first hollow tube and the ends of the suture are pulled. Pulling the suture pulls the expanded hemorrhoidal supporting tissue as purse string into the jaws of the stapler. The hemorrhoidal cushions are pulled back up into their normal position within the anal canal. The stapler then is fired. When it fires, the stapler cuts off the circumferential ring of expanded hemorrhoidal tissue trapped within the stapler and at the same time staples together the upper and lower edges of the cut tissue. After firing the staple it should be kept pressed for one minute to stop capillary bleeding.

Hemorrhoids at a Glance