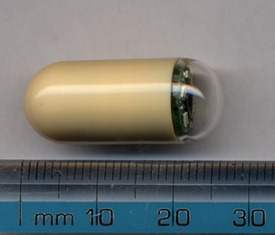 What do you mean by capsule endoscopy?

Capsule endoscopy is a technology that uses a swallowed video capsule to take photographs of the inside of the esophagus, stomach, and small intestine. For capsule endoscopy, the intestines are first cleared of residual food and bacterial debris with the use of laxatives and/or purges very similar to the laxatives and purges used before colonoscopy. A large capsule-larger than the largest pill-is swallowed by the patient. The capsule contains one or two video chips (cameras), a light bulb, a battery, and a radio transmitter. As the capsule travels through the esophagus, stomach, and small intestine, it takes photographs rapidly. The photographs are transmitted by the radio transmitter to a small receiver that is worn on the waist of the patient who is undergoing the capsule endoscopy. At the end of the procedure, approximately 24 hours later, the photographs are downloaded from the receiver into a computer, and the images are reviewed by a physician. The capsule is passed by the patient into the toilet and flushed away.

What type of diseases can be diagnosed with capsule endoscopy?

Capsule endoscopy continues to improve technically. It has revolutionized diagnosis by providing a sensitive (able to identify subtle abnormalities) and simple (non-invasive) means of examining the inside of the small intestine. Some common examples of small intestine diseases diagnosed by capsule endoscopy include:

What are the limitations of capsule endoscopy?

While the capsule provides the best means of viewing the inside of the small intestine, there are many inherent limitations and problems with its use, the most important of which is that the capsule does not allow for therapy. Other problems include: