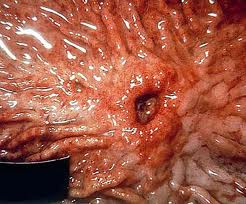 What does a peptic ulcer mean?

What are the causes of peptic ulcers?

For many years, excess acid was believed to be the major cause of ulcer disease. Accordingly, treatment emphasis was on neutralizing and inhibiting the secretion of stomach acid. While acid is still considered significant in ulcer formation, the leading cause of ulcer disease is currently believed to be infection of the stomach by bacteria called " Helicobacter pyloricus" (H. pylori). Another major cause of ulcers is the chronic use of anti-inflammatory medications, commonly referred to as NSAIDs (non steroidal anti-inflammatory drugs), including aspirin. Cigarette smoking is also an important cause of ulcer formation and ulcer treatment failure.

H. pylori bacteria are very common, infecting more than a billion people worldwide. Infection usually persists for many years, leading to ulcer disease in 10 % to 15% of those infected. H. pylori are found with gastric and duodenal ulcers. Elimination of H. pylori bacteria by antibiotics has clearly been shown to heal ulcers and prevent ulcer recurrence.

Cigarette smoking not only causes ulcer formation, but also increases the risk of ulcer complications such as ulcer bleeding, stomach obstruction and perforation. Cigarette smoking is also a leading cause of ulcer medication treatment failure. NSAIDs are medications for arthritis and other painful inflammatory conditions in the body. Aspirin, ibuprofen (Motrin), naproxen (Naprosyn), and etodolac (Lodine) are a few of the examples of this class of medications. Prostaglandins are substances which are important in helping the gut linings resist corrosive acid damage. NSAIDs cause ulcers by interfering with prostaglandins in the stomach.

What are symptoms of an ulcer?

Symptoms of ulcer disease are variable. Many ulcer patients experience minimal indigestion or no discomfort at all. Some report upper abdominal burning or hunger pain one to three hours after meals and in the middle of the night. These pain symptoms are often promptly relieved by food or antacids. The pain of ulcer disease correlates poorly with the presence or severity of active ulceration. Some patients have persistent pain even after an ulcer is completely healed by medication. Others experience no pain at all, even though ulcers return. Ulcers often come and go spontaneously without the individual ever knowing, unless a serious complication (like bleeding or perforation) occurs.

How is an ulcer diagnosed?

The diagnosis of an ulcer is made by either a barium upper GI x-ray or an upper endoscopy (EGD-Esophagogastroduodenoscopy) the barium upper GI x-ray is easy to perform and involves no risk or discomfort. Barium is a chalky substance administered orally. Barium is visible on x- ray, and outlines the stomach on x-ray film. However, barium x-rays are less accurate and may not detect ulcers up to 20% of the time. An upper endoscopy is more accurate, but involves sedation of the patient and the insertion of a flexible tube through the mouth to inspect the stomach, esophagus, and duodenum. Upper endoscopy has the added advantage of having the capability of removing small tissue samples (biopsies) to test for H. pylori infection. Biopsies can also be examined under a microscope to exclude cancer. While virtually all duodenal ulcers are benign, gastric ulcers can occasionally be cancerous. Therefore, biopsies are often performed on gastric ulcers to exclude cancer.

What are the complications of Peptic ulcer disease?

Patients with ulcers generally function quite comfortably. Some ulcers probably heal even without medications. Therefore, the major problems resulting from ulcers are related to ulcer complications. Complications include ulcer bleeding, ulcer perforation, and gastric obstruction.

Patients with ulcer bleeding may report black tarry stools (melena), weakness, a sense of passing out upon standing (orthostatic syncope), and vomiting blood (hematemesis). Initial treatment involves rapid replacement of lost body fluids intravenously. Patients with persistent or severe bleeding may require blood transfusions. An upper endoscopy is performed to establish the site of bleeding and to stop active ulcer bleeding with the aid of heated instruments.

Ulcer perforation leads to the leakage of gastric contents into the abdominal (peritoneal) cavity, resulting in acute peritonitis (infection of the abdominal cavity). These patients report a sudden onset of extreme abdominal pain, which is worsened by any type of motion. Abdominal muscles become rigid and board-like. Urgent surgery is usually required.

Patients with gastric obstruction often report increasing abdominal pain, vomiting of undigested or partially digested food, diminished appetite, and weight loss. The obstruction usually occurs at or near the pyloric canal. The pyloric canal is a naturally narrow part of the stomach as it joins the upper part of the small intestine called the duodenum. Upper endoscopy is useful in establishing the diagnosis and excluding gastric cancer as the cause of the obstruction. In some patients, gastric obstruction can be relieved with tube suction of the stomach contents for 72 hours, along with intravenous anti-ulcer medications, such as cimetidine (Tagamet) and ranitidine (Zantac). Patients with persistent obstruction require surgery.

What treatments are available for peptic ulcers?

The goal of ulcer treatment is to relieve pain and to prevent ulcer complications, such as bleeding, obstruction, and perforation. The first step in treatment involves:

Antacids neutralize existing acid in the stomach. Antacids such as Maalox, Mylanta, and Amphojel are safe and effective treatments. However, the neutralizing action of these agents is short-lived, and frequent dosages are required. Magnesium containing antacids, such as Maalox and Mylanta, can cause diarrhea, while aluminum agents like Amphojel can cause constipation. When antacids are discontinued Ulcers frequently return.

Examples of H2 blockers are cimetidine (Tagamet), ranitidine (Zantac), nizatidine (Axid), and famotidine (Pepcid). While H2 blockers are effective in ulcer healing, they have limited role in eradicating H. pylori without antibiotics. Therefore, ulcers frequently return when H2 blockers are stopped. Generally, these drugs are well tolerated and have few side effects even with long term use. In rare instances, patients report headache, confusion, lethargy, or hallucinations. Chronic use of cimetidine may rarely cause impotence or breast swelling. Both cimetidine and ranitidine can interfere with body's ability to handle alcohol. Patients on these drugs who drink alcohol may have elevated blood alcohol levels. These drugs may also interfere with the liver's handling of other medications like Dilantin, Coumadin, and theophylline. Frequent monitoring and adjustments of the dosages of these medications may be needed.

Sucralfate (Carafate) and misoprostol (Cytotec) are agents that strengthen the gut lining against attacks by acid digestive juices. Carafate coats the ulcer surface and promotes healing. The medication has very few side effects. The most common side effect is constipation and the interference with the absorption of other medications. Cytotec is a prostaglandin-like substance commonly used to counteract the ulcer effects of NSAIDs. Cytotec may protect the stomach from ulceration in those who take NSAIDs on a chronic basis. Diarrhea is a common side effect. Cytotec can cause miscarriages when given to pregnant women, and should be avoided by women of childbearing age.

Many people harbor H. pylori in their stomachs without ever having pain or ulcers. Patients with documented ulcer disease and H. pylori infection should be treated with antibiotic combinations. H. pylori can be very difficult to completely eradicate. Treatment requires a combination of several antibiotics, sometimes in combination with a proton-pump inhibitor, H2 blockers or Pepto-Bismol. Commonly used antibiotics are tetracycline, amoxicillin, metronidazole (Flagyl), clarithromycin (Biaxin), and levofloxacin (Levaquin). Eradication of H. pylori prevents the return of ulcers (a major problem with all other ulcer treatment options). Elimination of these bacteria may also decrease the risk of developing gastric cancer in the future. Treatment with antibiotics carries the risk of allergic reactions, diarrhea, and sometimes severe antibiotic-induced colitis (inflammation of the colon).

There is no conclusive evidence that dietary restrictions and bland diets play a role in ulcer healing. No proven relationship exists between peptic ulcer disease and the intake of coffee and alcohol. However, since coffee stimulates gastric acid secretion, and alcohol can cause gastritis, moderation in alcohol and coffee consumption is often recommended.

Peptic Ulcer Disease at a Glance